A diatribe on selling canned peaches to, among others, Australian buyers 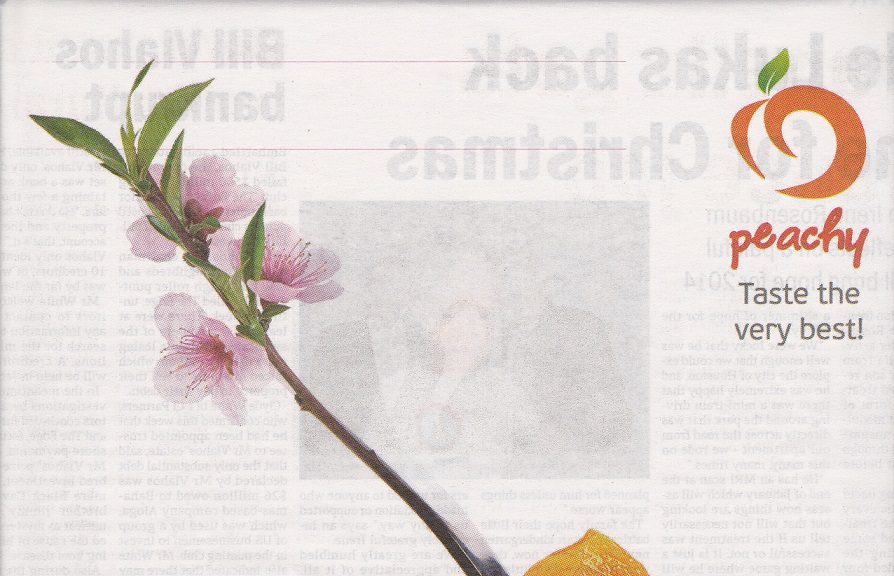 In the vernacular, a kopanos is held to be a person possessed of sufficient mental and physical density as to render themselves able to be pummelled in frustration, hence the verb ‘κοπανάω’, wherein the hapless kopanos is a mere passive recipient of a perpetrator’s violent largesse.
The fact that Kopanos also denotes a settlement in Naousa, Macedonia, may or may not be a running commentary on the relative intellectual gifts of its inhabitants, yet if the advertisement accompanying this diatribe is to be considered, which is the brainchild of the peach growers of Kopanos, some things are better left unsaid.
The advertisement, which coins the word ‘peachy’, attempts to sell canned peaches to, among others, Australian buyers. How peachy this campaign is proving to be is difficult to gauge, especially given that so far, I have only been able to locate the advertisement in the ethnic media, giving rise to a justifiable belief that the Kopanoi are labouring under the misapprehension that only the Greeks of Australia constitute a target market for the purchase of canned peaches. This of course is despite the fact that, if one accedes to the Kopanoi’s exhortations as featured in their advertisement to visit their website, one is able to ascertain that their campaign forms part of a program referred to and known as ‘Information, Provision and Promotion Measures for Agricultural Products in Third Countries (Turkey, Australia)’. We learn that said program was initiated in 2011 and will be completed in three years. We also further learn that this campaign is funded by Greece and the European Union.

The reason why one feels the need to visit the website is simple. From a cursory glance at the advertisement, one cannot easily understand what the Kopanoi wish us to do, or indeed, what they are advertising. By plying us with dietary information extolling the health benefits of canned peaches, in dubious English, do they wish us to eat more canned peaches, or in particular, ones produced by them? Or, given that there is a dearth of information as to where the consumer can locate Greek canned peaches should they be moved by the desire to do so, either in the advertisement or on the accompanying website, is this advertisement more geared towards possible wholesalers of Hellenic peaches?

In this at least, the website is revealing. Standing behind the Kopanoi is the Hellenic Canned Fruit Industry Network, whose stated aim is to “improve its members’ role in vaster international markets”. Underlying this imperialistic move for peachy lebensraum and fruity ostpolitik, we are further told that said company wishes to “increase its market share by all means, mainly in the countries of Eastern Europe, which due to political and social changes can be seen as promising markets, as well as in third (sic) countries, such as Turkey and Australia”.

In a sense, therefore, we are treated not so much to a culinary seduction whereby we will be caressed and cajoled into preferring Greek canned peaches above all others, but rather, a declaration of war, via which Macedonian peaches will commence their slow but steady march over Eastern Europe to third countries, whatever that means, and from there, conquer the world. Such a declaration makes sense, when one considers that it was Alexander the Great himself who introduced the peach into Greece after his invasion of Persia and indeed, the reverse eastern reconquest of the peach may be a historic inevitability of the type that is impossible to forestall. Indeed, a marketing campaign showing a Macedonian peach impaled upon the sarissa of a Macedonian soldier crushing all before him underfoot, accompanied by a caption that reads: ‘Peaches: Resistance is Futile’, would be more in keeping with the tone of the website in question.

For it is a sad fact that yet another campaign for the promotion of Greek products has gone horribly wrong, especially as far as Australia is concerned. After all, it is questionable how the Kopanoi feel that they will be able to make inroads into our country when they refer to it as a “third country”, in a manner that implies that it constitutes a foreign planet that needs to be colonised. Instead of bombarding us with nutritional information as to the health benefits of the peach, information that they would have known, had they conducted even a minute amount of research, we already have in Australia, the Kopanoi fail to realise that we have, especially in Victoria, a local canned fruit industry of our own. In this respect, they should be exploring ways to compete with an already domestic market rather than pretend that one does not exist. One way of doing so, of course, is to capitalise upon a Macedonian tradition of peach cultivation that exceeds two millennia.

If the Kopanoi extended their research further, instead of squandering Greek and European Union funding on inept, and quite frankly, embarrassing, ineffectual and incomprehensible advertisements, they would come to understand that the canned fruit industry in our state is in trouble and temper their approach accordingly, creating a campaign that would tease and entice the consumer, rather that boldly trumpet an amateurish business plan that would ensure that no serious business partner would go near them, let alone market or purvey what are, in fact, very nice peaches indeed.

The good Kopanoi at the Hellenic Canned Fruit Industry Network have also failed to comprehend one extremely important fact in relation to Australia: ours is a food culture. Food is celebrated and explored in the media, in the form of cooking and game shows, in restaurants and in the domestic sphere to an unprecedented level. The way to the Aussie heart, both male and female, is these days well and truly by way of our stomachs, and all the Kopanoi have to do is already draw on popular traditions that esteem the peach, in conjunction, famously with cream, whipped or otherwise, according to one’s predilections, as an article of seduction, romance and decadence, in order to market the fruit of their labours effectively. Drawing the two strands, those of tradition and of sensuality, together, a campaign that features the lusciousness of the peach with time-honoured Greek know-how, in which the Australian public is told that when it comes to lasciviousness and fruit, Greeks do it better, would work wonders for the Macedonian fruit industry. Mentioning as an aside that Alexander and his soldiers were possessed of posteriors as firm as Greek peaches might also go some way in furthering the cause of said stone fruit.

It is perhaps meet to conclude this exposition into the marketing techniques of the Macedonian phalanx by noting that on the peachy website, the irrepressible Kopanoi have seen fit to conduct a poll on the information provided, in which they ask pertinently: “Are you satisfied with the information about the DAIRY products presented in the webpage?”

It goes without saying that one hundred per cent of all those responding wholeheartedly and somewhat breathlessly affirmed their satisfaction.
To the Kopanoi of the Hellenic Canned Fruit Industry Network, therefore, this observation on the relativity of the peach by the master, Pablo Picasso: “One does a whole painting for one peach and people think just the opposite – that particular peach is but a detail.”

Until next week, stay juicy.