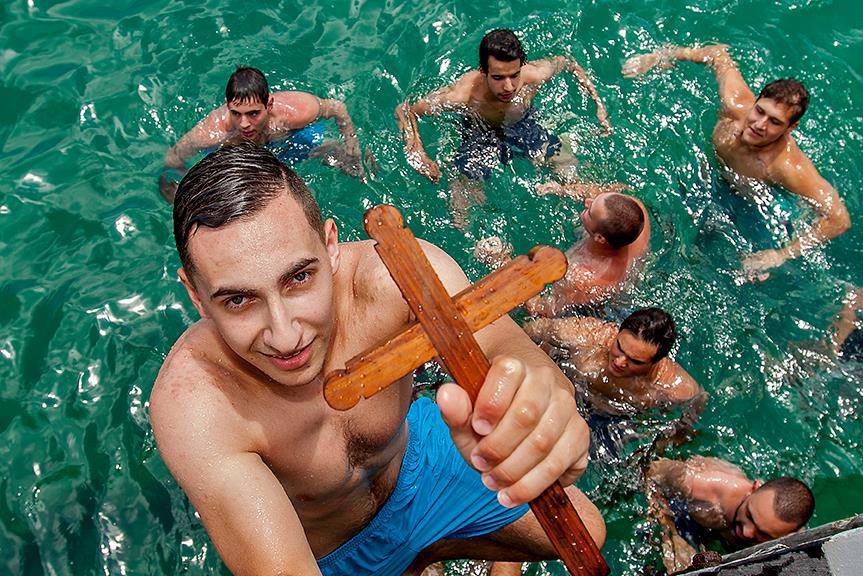 True to tradition, the Greek Orthodox Community of Australia celebrated the baptism of Jesus Christ by John the Baptist, with events held in all the major Australian cities. The Greek Orthodox Archdiocese of Australia organised services for the commemoration of the Epiphany in Mentone, Frankston and Geelong, in Victoria.

More than 5000 members of the parish gathered outside the Panagia Kamariani church in Red Hill to attend the liturgy given by Father Eleftherios Tatsis, with swimmers making their way to neighbouring Rye, where a young girl made history by becoming the first female to dive for the cross in Australia. Thirteen year-old Emily Paxevanou was amongst 20 young male counterparts.

The eventual winner, eighteen year-old Matthew Papadimitriou from Rowville in Melbourne’s east, caught the cross in Rye, while Nickolaos Alesios found it in Geelong. Adam Kaoulas was the lucky swimmer who got to it first in Frankston and Gregory Kakavas took the dive of success in Mentone.

Prior to the dive in Frankston, his grace Bishop Iokovos of Miletoupolis, assisted by Father D. Georgalas, held a holy service to further commemorate the day, at the new Holy Epiphany Church, which is the only church in Australia devoted to Theophaneia.

The Parish from the church of Pammegiston Taxiarhon, decided to perform the liturgy at Parkdale beach, while Father Chrisostomos Polyzoidis on the other hand, who moved to Australia recently from Northern Greece, enthusiastically blessed the waters of Mentone, during summer, something previously foreign to him.

The Greek Orthodox Parish of the areas had also organized all day events, with music and dancing till late in the afternoon. Souvlakia, sausages, Greek sweets, ice-creams, coffee, tea and cold drinks were all on offer by the Archdiocese.

In Victoria, the main celebrations will take place on Sunday January 11 in a combined celebration by all Parishes in Melbourne, celebrated by Their Graces Bishop Ezekiel of Dervis and Bishop Iakovos of Miletoupolis together with all remaining Clergy of Melbourne.

The celebration has moved from Station Pier- where it was held for many years- to Princes Pier in Port Melbourne (just 400m West of its traditional setting). The liturgy will commence at 1:00 pm, followed by music, dancing and activities for children until late in the afternoon. Food and drink will be available at the Pier together with a variety of other stalls.

Parking will be free around the area, though there is a limited number of spaces. Buses will be provided by Gemini Tours, leaving from Victoria Avenue, Albert Park at 11.30 am.