Orthodox service to mark the opening of the 2015 legal year 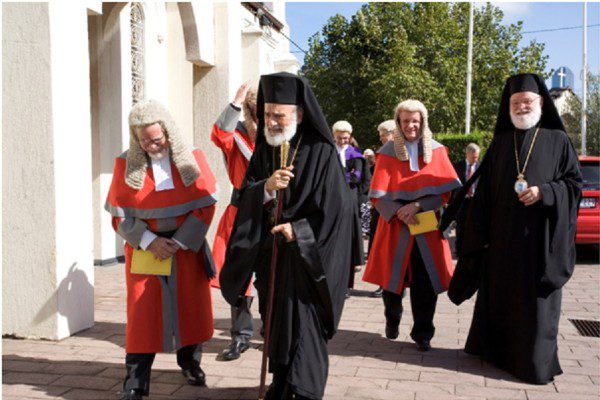 On Tuesday 3 February 2015 at 9.00 am an Eastern Orthodox service will be held at St Eustathios Greek Orthodox Church, 221 Dorcas Street South Melbourne, to mark the opening of the 2015 legal year.

The service will be a collaboration of the Greek, Antiochian, Russian, Serbian, and Romanian Orthodox Churches. It is expected to finish by 9.45 am, and will be followed by morning tea in the church hall.

Judicial officers, tribunal members, court officials and members of the legal profession will enter the church in procession from the church hall. Judges and barristers will be wearing their official robes and wigs.

Celebrating the opening of the legal year is an ancient tradition which originated in Paris in 1245. A Catholic mass was held in the Notre Dame Cathedral to invoke the guidance of the Holy Spirit over the Ecclesiastical Court judges. The Holy Spirit was considered the source of wisdom, understanding, counsel and fortitude. Later in France, the mass was celebrated in honour of the patron saint of lawyers, St Yves of Brittany, canonised in 1347. (The Eastern Orthodox patron saint of lawyers is St Dionysius the Areopagite whose Feast Day is celebrated on 3 October.)

The mass crossed the Channel in 1310, during the reign of King Edward II, and landed at Westminster Abbey. All the judges and barristers attended the mass on the first day of the first term of the legal year, known in England as Michaelmas term. They celebrated the inauguration of the new legal year, and sought divine guidance for their work. The practice of holding the mass stopped during the Reformation in the 16th century, when the Church of England broke away from the Roman Catholic Church. The mass was revived in England in 1897, and it returned to Westminster Abbey in 1904.

The mass came to be known as the Red Mass, because of the red vestments worn by the priests. The priests wore red to symbolise the tongues of fire that descended on the Apostles at Pentecost, those flames being the manifestation of the Holy Spirit. Senior judges wore red robes and the barristers wore red hoods, to make for a cathedral/abbey resplendent in red.

In the English tradition, judges proceeded in their formal robes on foot from Temple Bar to Westminster Abbey for a religious service, followed by the Lord Chancellor’s breakfast in Westminster Hall.

The first Red Mass in Australia was held at Sydney’s St Mary’s Cathedral on 16 February 1931.

Since 2008 a community gathering has also been held to celebrate how the community and the legal system work together towards achieving a just society.

Today, ceremonies and religious services to mark the opening of the legal year in Australia are attended by governors, judges, senior ministers and other politicians, consular officials, academics, religious leaders and lawyers who seek guidance and blessings for the year to come. In the religious services, prayers and blessings focus on the roles and responsibilities of the leaders present. They reflect on the part they play in the administration of justice and seek the guidance of the Holy Spirit and blessings of strength, wisdom, truth and justice for the legal system.

As the Honourable Marilyn Warren, Chief Justice of the Supreme Court of Victoria, said at the 2008 community gathering:

“Those committed to the law take the opening of the legal year as the time to recommit to fairness and impartiality and revive their courage to maintain and apply the law.

In reality, there is no opening of the legal year. The law is always open. The opening is merely a temporal marker to pause momentarily to consider what the law is about and our individual roles in it.

The opening of the legal year is but a time for renewal and recommitment.”

In 2015, in addition to the Eastern Orthodox service at 9.00 am on Tuesday 3 February at St Eustathios Greek Orthodox Church, three other events will be held on the morning of 2 February 2015, which is officially the first day upon which the courts will resume full-time operation for 2015. The three events are a multi-faith gathering, which will be held at Government House, a Catholic Red Mass, which will be conducted at St Patrick’s Cathedral and a community gathering, which will take place at the County Court.

Further information about the Eastern Orthodox service can be obtained by contacting Mr Daniel Bellis on 9245 9010 or at daniel@greekorthodox.org.au
Members of the legal profession with Greek backgrounds, Greek Australians and Philhellenes are encouraged to attend this significant and historic service. Those eligible to take part in the procession should assemble at the church hall by 8.45 am.