Young talent on the fast track 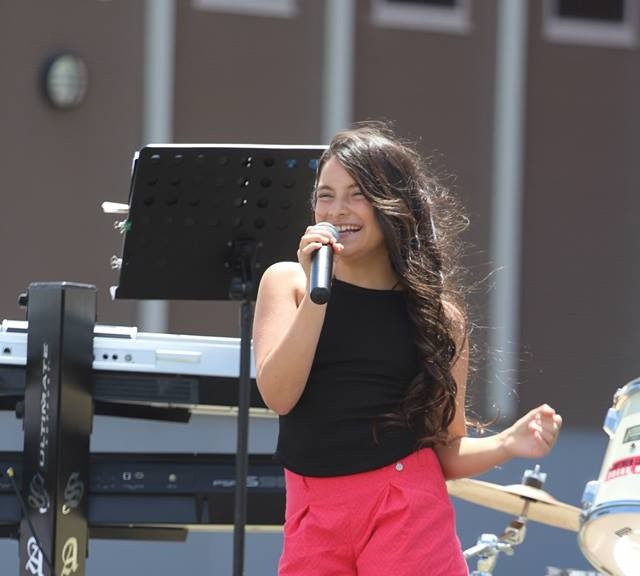 Greek Australian Victoria Kokkinos is ten years old, and has been identified by industry professionals as “one of the best junior singers in the country”. Victoria will be singing at the grand final of the FastTrack singing competition (junior division), to be held on the 14th of February this year, after winning her semi-final. FastTrack is the largest non-televised singing competition in the country.

“She has a ‘flair’ and ‘feel’ for music beyond her years. Her intensity and performance level is incredible. Big, big, big hit prediction, her vocal range is incredible and she also sings in whistle tone,” says David Jaanz, of The David Jaanz School of Singing, comparing Victoria to a young Gabriella Cilmi.

When Victoria won the 2014 Kingston Curtain Call, the comment from the judging table was: “That was the best performance we have ever seen from a 10-year-old in our years in the industry.”

Her father, Arthur Kokkinos, was a musician who played in Greek bands for about 17 years.

“Victoria was always exposed to music, I would play the guitar and her mother would sing to her,” he tells Neos Kosmos.

“We noticed early on that she had a talent for music and would love listening. When she was two, we realised that Victoria could hold a tune and sing a melody in time.”

Victoria started singing in competitions about 18 months ago. The last 12 months she has been coached by Lynn Jaanz (who is also Greek) from the David Jaanz School of Singing. Since then, she has dramatically improved her skill, and her ability to achieve high pitch notes has really accelerated. Victoria over the last 12 months has performed in competitions and festivals, with her achievements including winning Kingston Curtain Call’s Junior division – under 14 and a third place in Ballarat’s Got Talent (Open age group).

Victoria averages two performances per month and is currently booked out until the start of April, with future performances including the Hume Council – Relay for Life, a Box Hill Fundraiser for local radio station 94.1 and featuring on a Wednesday night at Beavs Bar in Geelong, with some prospects at local music festivals throughout the metropolitan area.

She also plays the piano, while excelling in other artistic areas such as drawing and sketching. Her main focus is music though, her piano studies and of course school. Victoria has written several songs – one of which she performed live last year for the first time. The song She Has discusses the issue of “self-belief” and the negative influences that hold us back from achieving our dreams. She wrote it one night after some kids at her school told her she couldn’t make it as a singer. The song talks about a girl who stopped believing in her dreams and struggled; eventually her belief returned and she flew again.

“Victoria has set certain goals in her life and one of those goals is to be signed to a record label and make and perform music that is enjoyed by people all over the world,” Mr Kokkinos adds.

“She loves nothing more than being on stage and performing for people. The bigger the stage and the audience, the better.”

It seems that Victoria knows what she wants and she is committed to getting it. For a ten-year-old to have such clarity, drive and purpose is rare indeed.

“We have raised Victoria with the morals and beliefs of our Greek heritage and she is proud of her Greek roots,” her father explains.

“I would love to sing Greek music and this is something I want to start doing this year,” says young Victoria Kokkinos. “I love making people happy and
entertaining them. Singing helps me express my feelings.”

What is most impressive about Victoria is how truly comfortable she feels on stage. “The more I sing the more at home I feel,” she says.
For her parents, there is no better feeling than seeing Victoria on stage singing and connecting with the audience.

“I can’t explain how proud we are of her, her achievements, tenaciousness, drive and creativity, while she grows and matures into a strong individual,” her father declares.

“I love when she learns a song and then makes it her own – she is creating her own brand. There have been many tears shed whilst we watch her perform.”

Her father believes that Victoria is a very mature ten-year-old, who has experienced both disappointment and elation during her short singing career, therefore able to handle the early media exposure without her delicate personality being affected. Her parents are always by her side, supporting and protecting her.

“Initially she found it hard when things didn’t go her way, but through that she has grown and matured,” Mr Kokkinos says.

“She learns from both the good and the bad experiences and has become a very resilient little girl. She is well grounded and focused on her music and entertaining her audience while enjoying herself.”

Little Miss Kokkinos says her ambition is to become “a world-wide recording artist and be the best singer in the world”. Neos Kosmos wishes her good luck.

*Victoria has been interviewed by Vincent Burkhart (US radio host) and sung live over radio in the USA after coming runner up in the Music Matters International Quest. She received the President’s Choice award at the Stars of the West singing competition in Brimbank Rotary Club and co-hosted the local radio show, Music Matters. Victoria was also the youngest performer in the top level of the final year showcases at David Jaanz School of Singing, while she took part in the 2013 Hairspray musical as well as 2012’s musical version of Annie, at the July Michelle Slater Performing Arts. Victoria also appeared in Shae McCormack’s Old Man North short film.

Victoria attends The David Jaanz School of Singing, the biggest and most successful school in Australasia, operating for more than two decades, with over 1,000 students nationally, including the highest-selling artist ever in Australia, Delta Goodrem.