Fall in love at the 33rd Sydney Greek Festival

This year, the highly-successful event will be held on Valentine’s Day weekend, 14-15 February, set in the stunning surrounds of Darling Harbour 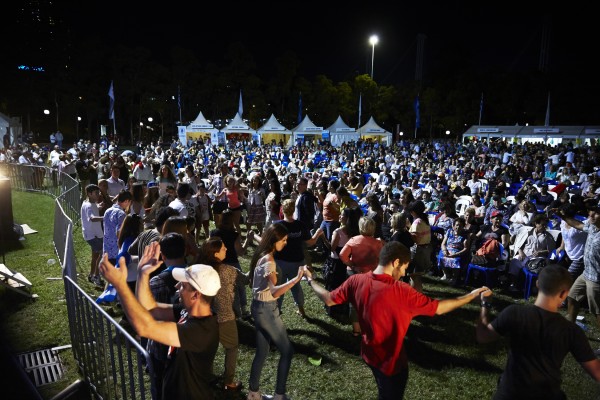 Greek people are traditionally well-versed on the topic of love, therefore it is no coincidence that this year’s festival falls on Valentine’s weekend. The already buzzing atmosphere will be amplified considerably by the warm feeling of young and old love in the air! Be careful to avoid Cupid’s arrows and stick to the well-beaten path of Greek festivities, which promises to be spectacular.

The Greek Orthodox Community of NSW, along with a contingent of volunteers and supporters, will take over Darling Harbour to celebrate the Greek Festival of Sydney. The two-day event will launch the 33rd cultural and events program in the liveliest way possible … with traditional Greek dancing, local and international musicians and a variety of interactive stalls.

The launch
The official launch was held on February 5 at The Grand Roxy in Brighton, a long term supporter of cultural initiatives such as the festival. A packed room of 350 people were in attendance to hear about the wonderful new program, and of course to act as a prelude to what will be a great weekend.

2015 festival
The Greek Festival is an opportunity to experience Greece and all its delights. Festival chair Nia Karteris told me that this event is possibly “the biggest multicultural event of its kind in Sydney”, perhaps NSW.

As I sat down for coffee with Ms Karteris, you could not help but notice an incredible sense of pride in what the festival means to her and to those involved. I was told that the festival continues to grow and grow. As someone who has seen the event evolve in the 12 years she has been involved, you can sense a pure love for an event that many a Greek holds dear to their hearts.

Ms Karteris explained to me that it was not just Greeks who come along, but that a significant percentage (40 per cent) are non-Hellenes. Previous locations made it difficult to reach out to non-Greeks, as they were contained in a suburban environment that was known more for its immediate Greek residents rather than a flow of tourists and passersby.

Almost 200,000 people are expected to attend the Darling Harbour event, a significant statement of the love that Sydney has for such a multicultural festivity.

Darling Harbour provides an ease of access by public transport and more importantly, it makes it a landmark activity in the heart of the city of Sydney. More importantly, being surrounded by water will help bring a sense of the Greek islands and Greek summer to the festivities.

For those of us who miss Greece almost every minute, this event will help bridge the gap between the daily atmosphere of Greece and being in the beautiful city of Sydney.

Festival history
For those of us who may be too young to remember, the event started as a parelasi in 1982 at suburban Addison Road in Marrickville before a shift to Campbell Oval in Ashbury. I remember as a young boy attending with my family. The smell of souvlaki and the bouzouki playing, it was a treat. The popularity of the festival grew over the years to the point it was moved to Brighton in the 1990s. Again, the festival grew beyond expectations, and after being unable to secure a move to the Grand Parade, the highway of Brighton that connects the south of Sydney with the airport and the city, the event was moved to Darling Harbour. In a sense it was a real master stroke. One wonders if it too will one day be too small for the plethora or Greeks and non-Greeks who have become fascinated by what the Greek Festival brings to the cultural life of Sydney.

The president of the Greek Orthodox Community of NSW, Mr Harry Danalis, has been with the festival from the start, minus a brief period away from the event in the late ’90s and early ’00s. He made the point that “people are thirsty to follow quality cultural activities”. The festival consistently delivers and it is why it has become a pinnacle on the Sydney cultural calendar, something for people in the Greek community to be proud of.

The festival will also be a chance to farewell Dimi Lafazanos, who has been director of the festival for the last six years, and welcome her the youthful Pamela Proestos as her replacement.

The future
Mr Danalis has cautioned that a lack of state and federal government grants at the moment will have an impact on events such as the Greek Festival. The quest to solve long-term sustainability is firmly in the thoughts of the organisers. With a strong backing from the business community and other supporters, it is hoped that sustainability is achieved for future generations.

For those who have never been, it gives people an opportunity to experience what Greece can mean. Mr Danalis pointed to the fact that there is a great sense of goodwill for a glendi, cultural dancing, activities for children or just socialising with those with a similar thirst for Greece.

What to expect at Darling Harbour
The calibre of artists in this year’s line-up, from the two-day festival at Darling Harbour to the entire nine-week program, will not disappoint. The organising committee reminded me that it is more than just the two-day event, it is a nine-week period of cultural activities.
Like every year, Darling Harbour will feature a quality line-up of live entertainment, including headlining act, much-loved Greek musician Dimitris Basis, who will be joined on stage by Zoi Papadopoulou and backed by a seven-piece band.
Whilst Dimitris Basis is of course well known across the Greek world, he was actually born in Stuttgart, Germany, making him a fellow member of the Greek diaspora. His family moved to Makedonia when he was around eight years old.
An interesting fact about the headliner is that he has a diploma in Byzantine music, using Byzantine chanting as a springboard to a future career in music.
Dimitris has told organisers of his excitement to be in Australia; explaining how impressed he is with the strength of the Greek community on the other side of the world.

Zoi Papadopoulou is a rising star, originally from Thessaloniki, with two recent albums showcasing her unique contemporary style. She will bring a great sense of energy and style to the stage. Both artists are expected to break hearts!

Bring your family, your appetites and your dancing shoes for two days of music, fine food and Greek festivities. Most importantly, bring your agapi and celebrate a weekend of love and Greek culture. I’m sure that in the surrounds of Darling Harbour, Eros and Saint Valentine would certainly approve.
Entry is free of charge.