While she grows as a playwright, the Greek-Russian actress draws from her own experience, migrating from St. Petersburg to Athens and then Sydney 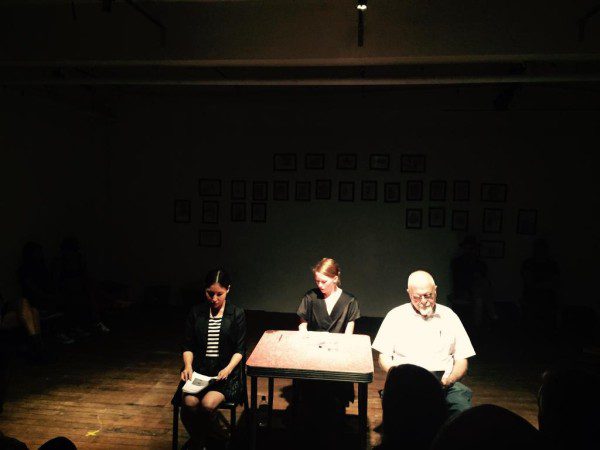 One thing is certain about Victoria Haralabidou. She knows what it means to be a migrant. She has experienced it in the most defining manner. First, when she fled the former Soviet Union to Greece, a process resulting in her travelling back and forth during her studies and her first forays in acting. She experienced it again when she left Greece, just at the moment when she was becoming one of the most recognisable actresses there, following her success in television and film, in order to come and work in Australia (she has since appeared in several films and TV shows, most notably Home and Away and last year’s The Code). And, of course, she portrayed the quintessential migrant in the acclaimed film The Brides, produced by Martin Scorsese’s company and directed by the leading Greek filmmaker Pantelis Voulgaris. It was the story of a Greek woman leaving her country in the ’20s to go and get married abroad, travelling for weeks on a ship towards a life away from poverty.

Now it’s her turn to tell another migration tale, one that is the theme of the play Project 949, which she wrote and presented at a reading, as part of the ‘Asylum’ theatre project which took place in Sydney from February 3 to 15. Curated by director Dino Dimitriadis of the Apocalypse Theatre Company, ‘Asylum’ was an immediate artistic reaction to the Coalition government’s policy towards refugees and asylum seekers – known as ‘Operation Sovereign Borders’. In a short period of time, 27 writers managed to produce 24 plays which were presented in a series of sold-out performances, mostly as stage readings. Proceeds of these performances went to Newton’s Asylum Seekers Centre and Melbourne’s Asylum Seeker Resource Centre.

“There were 97 of us, in all, working together, for free. Regardless of the nobility of the cause, there was much gain for us in terms of communicating with the audience. Because the theatre is not a lonely experience, you don’t read plays at home”.

The actress has been experimenting in playwriting for the past few years, while she continues to pursue her acting career; her credentials include a residency with Playwriting Australia in 2011-2012. It goes without saying that migration is a central theme of her work.

“It is a way for me to deal with the images that are still stuck to my head regarding migration, conceptions that formed through my own personal experience,” she says.

“As a writer, I’m still ten years old, reliving the time we are about to move from Russia to Greece.”

As for the most striking image from that time, it’s that of the Greek summer.

“Coming from St Petersburg, where it’s winter 70 per cent of the year, it was quite an experience to live through summer in Greece,” she says.
“Summer always makes things better; it’s the power of the sun.”

Her play deviates from this sunny picture, though. Project 949 takes place in an off-shore immigration centre and it involves two UN representatives and an eleven-year-old girl disguised as a boy. The political aspect is obvious, though the writer is very cautious when talking about it.

“Actors don’t need to be very smart,” she jokes.

“As a writer, however, you need to have a position, and you need to have thought it through; one that comes from your heart. Politically speaking, migration is a very complicated issue, but at the same time it’s very simple: it’s there. Whatever we say, however hard we resist it, we need to accept its existence. I’m very concerned by the border situation, how people are placed regarding borders, but the most important issue is the children issue: when you enclose children in camps, you supply them with the means to hate.”

Her viewpoint seemed to strike close to home, for some among the audience.

“I had a woman approach me at the end of the reading. She understood that I was the writer, as she saw the actors talk to me. She introduced herself and told me her story. She was one of the Greeks from Alexandria, in Egypt. ‘We fled at night, as well,’ she said. She didn’t even know my story.”