In Tasmania, the Nikitaras family have taken on Coles and Woolworths, and are winning battles if not the war 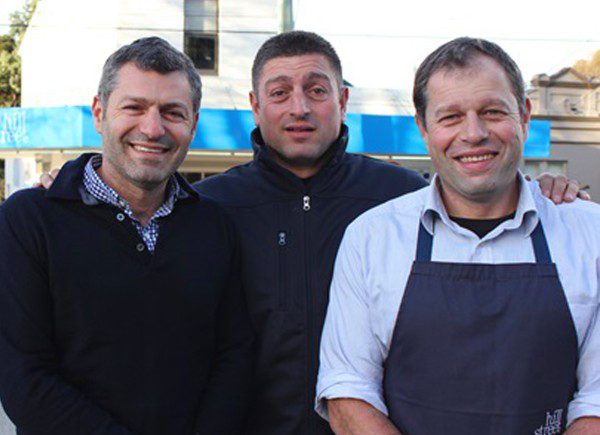 The Nikitaras brothers’ corner store has a hallucinatory shine, like a set from a period movie. Staff in navy blue uniforms and white net caps smile from behind jars of preserved clementines and glacé peaches, pineapples and cherries.

Glass cases present dioramas of stuffed olives, mushrooms and peppers; above them hang fragrant salami; the shelves are packed with Tasmanian wine and crusty loaves. In the fresh vegetables section, greens glisten and truss tomatoes blush.

Yet Hill Street Grocer is not some niche big-city organic haven; the shoppers in the aisles are also filling their baskets with canned tuna, washing powder and packets of nappies. This is a West Hobart neighbourhood supermarket, a family grocer the way they used to be.

Marco, Nick and Nektarios Nikitaras are simultaneously the throwbacks and the cheeky upstarts of the Tasmanian grocery business. They grew up behind the counters of their Greek immigrant parents’ shops, and Marco and Nick took this one over from Marco’s in-laws. Now a mini-chain, with a second store in Lauderdale (run by Nektarios) and a third in New Town (run by Nick), Hill Street Grocer has its own petrol-voucher discounts and loyalty schemes. It is an island in the highest density of Woolworths and Coles supermarkets in Australia.

Look closely, and something has gone amiss with the laws of scale: the checkouts are busier here than at the desperate-feeling Woolworths a few hundred metres away. The fruit is better and cheaper. There is no way this place should exist. Where did it all go so right?

And yet, as if they are magicians and not retailers, in their upstairs office Marco and Nick admit that it’s an illusion. “We win battles,” Marco says, “but we’re losing the war.”

They win through the quality of their produce and service, but they are losing behind the scenes, in the farms and the fields, where their supermarket rivals are cutting down their supply options and changing the way Australian food is produced.

A decade ago the region had 12 lettuce growers; it now has two. Across all food production, those supplying supermarkets have enlarged and consolidated, while the others have gone, along with food varieties.

“There’s no broccoli, field tomatoes, Roma tomatoes,” Marco says. “There are only two substantial cherry growers. The raspberry growers have consolidated and gone to Woolworths. French beans, runner beans, lots of beans used to be grown; not anymore. The supermarkets have exact specifications for the fruit and vegetables they want, and if they don’t want them, the growers won’t grow them.”

Woolworths owns the only grocery distributor in Tasmania, which means that Coles imports its produce from the mainland and a small competitor like Marco Nikitaras flies, several times a month, from the food bowl of Tasmania to Melbourne, where he compares prices and seeks better deals. “The situation here is contracting every day. You can’t just go to a wholesaler in Tasmania. They choose you, or not, depending on their existing supply relations with Woolworths.”

Meanwhile, size creates its own inefficiencies and food destruction takes place on a large scale.

Steve, a Woolworths-contracted lettuce grower who does not want to be identified, is destroying more produce than he used to farm. The supermarket’s orders vary in volume, but Steve has to be ready to fill the largest one possible. He has duly increased the size of his farm. “I have to grow for the maximum size of an order, or else I lose the contract. So I grow on that scale even though the order is usually a lot less. Everything I don’t sell, I have to destroy.”

While Steve’s contract with Woolworths gives him security, his margins are tiny and increasingly squeezed by rebates and marketing ‘kick-ins’. In June, he was one of the Woolworths suppliers asked for a ‘voluntary’ contribution of 40 cents a crate – on top of a standard marketing payment of 2.5 per cent of sales – to pay for a Jamie Oliver advertising campaign. “I didn’t like it, but I can’t afford to risk not paying,” Steve says.

The Oliver rebate attracted nationwide condemnation of Woolworths. Even conservative politicians commented, with Agriculture Minister Barnaby Joyce describing the payment as “a bit rich”. Oliver himself drew ridicule by saying he was only an “employee” of Woolworths, even though he trades on the idea that he can sway retailers’ ethics. Coincidentally but symbolically, the next week Woolworths had to recall thousands of defective Oliver-branded vegetable-shaped toys.

The Oliver story was part of a blizzard of adverse publicity for the supermarket giants. In June 2014, Coles lost a court case exposing its claims to be selling ‘fresh-baked’ bread when the dough was imported from Ireland. In July, the Australian Medical Association and the Pharmacy Guild of Australia criticised Woolworths about using unqualified pharmacy students and nurses to offer ‘health checks’ to shoppers.

Coles and Woolworths are the 19th and 15th biggest-selling retailers in the world, but their size generates more unease than national pride. Four crossbench federal parliamentarians – Nick Xenophon, John Madigan, Andrew Wilkie and Bob Katter – have designed a bill that would allow courts to order the break-up of companies that misuse their market power.

It is directed squarely at Coles and Woolworths. “No other country in the world has as large a percentage of its dry groceries market controlled by two chains,” says Xenophon. “We have been mugs to allow that to happen.”

This article is an extract from the essay ‘Supermarket monsters – Coles, Woolworths and the price we pay for their domination’, originally published in The Monthly – www.themonthly.com.au/issue/2014/august/1406815200/malcolm-knox/supermar…