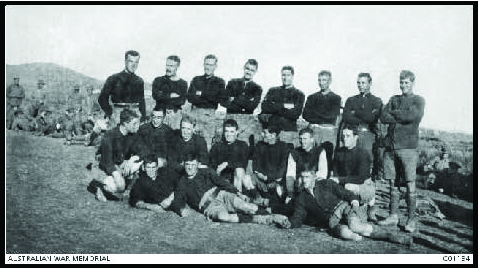 One of the possible Centenary of Anzac 2015 events that could be held would be a symbolic re-creation of the Anzac Association Football (they referred to it as soccer then) games on Lemnos in October and December 1915.

There are three photographs kept by the Australian War Memorial relating to football on Lemnos in 1915, all relating to the Anzacs.

The first is a photograph of British sailors arriving at Sarpi Camp for a football game in October 1915, with the Australians we presume, given that Sarpi was the principal Anzac rest camp on Lemnos in 1915.

There are two other later photographs of a game being played between the sailors of the Royal Navy’s HMS Hunter and Anzacs of the 6th Battalion in December 1915. This was held as the evacuation of the peninsula was underway, the disastrous Gallipoli campaign coming to its end.

I have been unable to find any documents stating the results of these matches.

It is possible that the dates are wrong and that the photographs all relate to a single game played on December 25, 1915, as part of the Christmas celebrations on the island.

Lance Corporal William Dalton Lycett did record in his diary that his Unit (the 4th Field Ambulance) played Association Football against a team from the Royal Scots Territorials on Thursday 23rd December 1915. As he writes, “we got beat 6 goals to 0”.

*Jim Claven is a historian and secretary of Melbourne-based Lemnos Gallipoli Commemorative Committee.