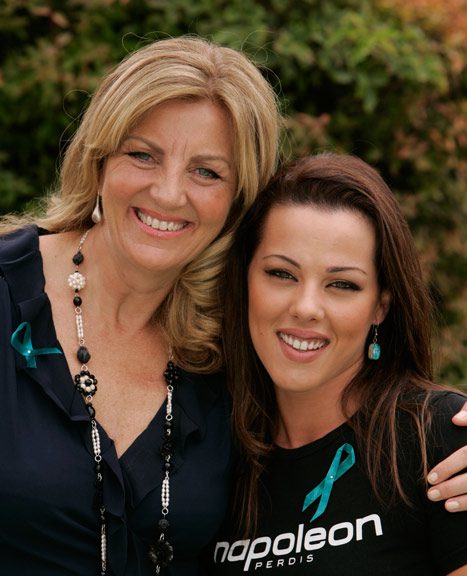 There is no early detection test for ovarian cancer and while the disease is often considered a silent killer, scientific evidence shows that many women do experience symptoms that if acted on, could result in an earlier diagnosis and a better chance of beating the disease.
Jean Kittson, the 2010 Ovarian Cancer Awareness Month Campaign Ambassador said, “Ovarian cancer affects someone’s friend, someone’s partner, someone’s sister, someone’s daughter and someone’s mother.

I’m delighted to be part of such an important health initiative for Australian women. Together, we can all learn the symptoms of ovarian cancer to save lives and at the same time raise vital funds to help women who have the disease.”
Tannia Tiropanis, a member of the Napoleon Perdis National Creative Team, is one of the11th Hour Ambassadors for the national health campaign.

“Napoleon Perdis is incredibly proud to be a partner of Ovarian Cancer Australia. When I was invited to be part of this campaign to raise awareness of the symptoms of ovarian cancer among women in my community, I was thrilled to be involved in such an important women’s health issue.”

“My family has been touched by cancer, so if by working with Ovarian Cancer Australia we can help save the life of just one woman by raising awareness about the early symptoms of ovarian cancer as well as raise vital funds to support the invaluable services offered by Ovarian Cancer Australia, then we will have helped to make a difference,” Tannia Tiropanis said.

Nicole Livingstone, co-founder and Patron of Ovarian Cancer Australia said, “We really value what Jean Kittson, Tannia Tiropanis and all the 11th Hour Ambassadors are doing to help us deliver this essential health message to Australian women. It’s this support that has given us the opportunity to educate women and hopefully help save lives.”

Ms Kittson said, “By teaming up we hope to inform women about a disease that is the 6th most common cause of cancer death among Australian women and help them learn to recognise the symptoms of ovarian cancer so that they can seek early treatment which could save their lives.

The 11th Hour Ambassadors are 11 women chosen to represent Australian women of all ages, cultures and professions to emphasise that women should not leave learning the symptoms of ovarian cancer until the 11th hour!”
For information call 1300 660 334 or go to: www.ovariancancer.net.au