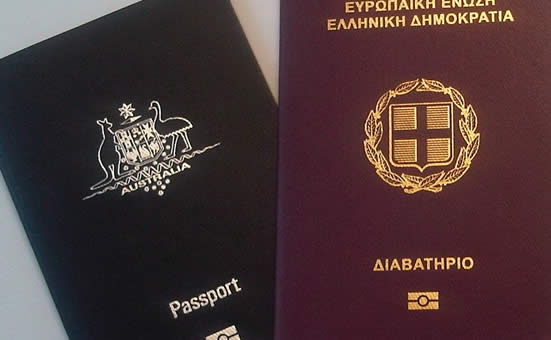 A new online passport index has calculated that Greece’s ‘passport power rank’ is seventh in the world, two places ahead of Australia.

The index, created by financial advisory firm Arton Capital, gives citizens the chance to see the ranking of their country’s passport, which takes into consideration how many countries can be visited without requiring a visa.

According to the website, Australian passport holders have the luxury of visiting 138 countries visa-free, while those with a Greek passport can visit 140.
Ranked in equal place with Greece were citizens of Canada, Austria and Malaysia, while Australia was joined in ninth position by the Czech Republic and Hungary.

However, the question on everyone’s lips is – which countries were ranked as the most powerful?

With a total of 147 countries accepting its citizens without a visa, those in possession of a passport from either the United Kingdom or the United States should consider themselves lucky.

France, Germany and South Korea came in at a close second, with 145 countries granting them visa-free entry.

And if you’re an avid traveller, your travel options are a little more complicated if you have a passport from either the Palestinian Territories, Solomon Islands, Myanmar or South Sudan, with only 28 countries granting those citizens entry without a visa.

Australia had the potential to be ranked eighth, however the country recently lucked out on visa-free travel to Indonesia, with the Australian drug trafficking saga involving Myuran Sukumaran and Andrew Chan suspected of being the cause of the strained relationship.

To find your passport and see the full index, visit www.passportindex.org/