Kyrgios succeeds in first round of Estoril Open

In a heated match, Nick Kyrgios has rallied in the final set to beat Spaniard Albert Ramos-Vinolas in Portugal 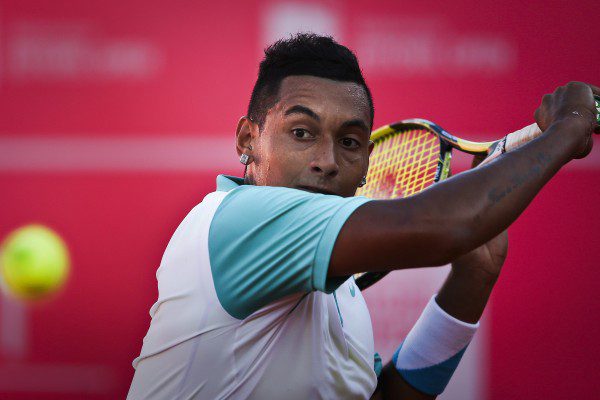 Nick Kyrgios came back from a break down in the final set and avoided being defaulted in the opening round of the Estoril Open in Portugal.

Having lost the second set in a tie-breaker, Kyrgios found himself down a break in the third, but rallied to get the match level late in the final set.

Kyrgios then went up 6-5 and had two match points on the Ramos-Vinolas serve, one of which he blew in spectacular fashion by missing a short ball wide and long just when it appeared the match was his for the taking.

That led to a final set tie-breaker, during which Kyrgios whacked a ball out of the stadium, and having already received two code violations, one for an audible obscenity and the second for racket abuse, he was treading a fine line.

Matters got heated too – umpire Fergus Murphy appeared to not see Kyrgios unleash his anger and then Ramos-Vinolas reacted, asking the umpire to issue a third and final code violation to the Australian.

Murphy refused and it upset Ramos-Vinolas, who would go on to drop three straight points to lose the match, before refusing to shake hands with the umpire, but not Kyrgios.

Kyrgios got off the hook, but it was not so for fellow Australian Marinko Matosevic, who lost in straight sets to Richard Gasquet.

The 7-6 (9-7), 6-1 loss to Gasquet, who was making his return from a back injury, was Matosevic’s sixth consecutive first-round defeat in all tournaments in a stretch dating back to March’s Indian Wells event, where he lost to Frenchman Edouard Roger-Vasselin.

The last time Matosevic won a match on the ATP World Tour was at the Acapulco event in February, where he defeated Spaniard Marcel Granollers, before falling to David Ferrer.

In other results, Bernard Tomic blew a one set to love lead to lose to Janko Tipsarevic in the first round of the ATP World Tour event in Munich.

Tipsarevic, playing on a wildcard, in just his third tournament of the year is making a comeback after being sidelined 17 months following two surgeries to remove a benign tumour from his left foot took a little over two hours to defeat Tomic 5-7, 6-1, 7-6 (7-3).

The Serbian hammered 11 aces in the three-set win and took advantage of the Tomic second serve, winning more than half the points when the Australian missed with his first ball.

The loss marks the first time this year that Tomic has bowed out in the first round of a tournament.

In Istanbul, young Australian Thanasi Kokkinakis got his clay court season off to a losing start, falling in the first round to 24-year-old Serbian Dusan Lajovic 6-4, 7-5.