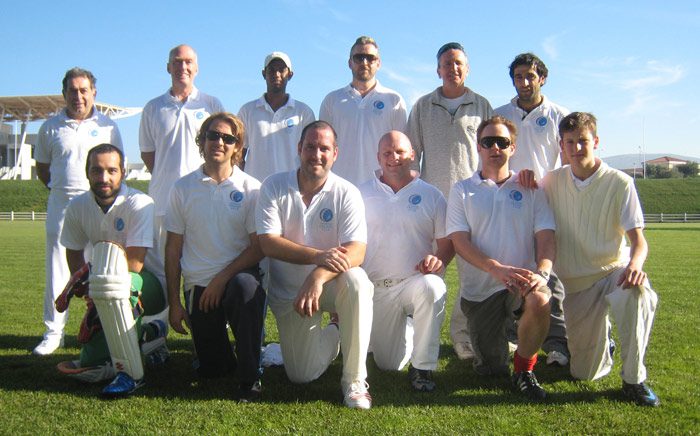 Iosif Nikitas’ passion for cricket started when he was seven years old. Like many Corfiots, Iosef grew up with the game that was and still is, a way of life on Corfu.

As Iosef decribes the work the Federation undertakes with schools across Greece, one can’t help but think there’s a tremendous sponsorship and marketing opportunity to be realised.

The first game of cricket played in Greece was in the ‘Kastropolis’ of Corfu town, when British Navy sailors set up stumps there in 1823.

After seeing the eccentric Englishmen at play, the Corfiots took the game to their hearts and it thrived on the island ever since.

Iosef has been a member of Corfu’s Gymastikos Cricket Club (established in 1893) for most of his life and he captained the Greek national team, which has been in existence since the federation’s creation in 1996.

He used to bat at number four and bowl leg-spin and still plays the odd friendly.

Today, as President of the Hellenic Cricket Federation, Iosif shares his passion by taking the game to the rest of Greece and pushing forward the development of the national team.
As we spoke on one of his regular visits to Athens, it’s clear that creating awareness at the grass-roots level, where he himself found the game, is a priority.

“It’s very important that we start with the young people. We teach the teachers about, the game, kwik cricket and indoor cricket. We have to buy the equipment from the UK for the kids to use and then we give it the interested schools for free.”

As Iosef decribes the work the Federation undertakes with schools across Greece, one can’t help but think there’s a tremendous sponsorship and marketing opportunity to be realised. A Milo approach to kids cricket in Greece by some enterprising visionary Australian business might do very well here.

Whilst cricket is a way of life in Corfu (children who show an interest can join any of the 13 local clubs on the island), in the rest of the country where sporting culture is defined by soccer and basketball, awareness of the game is more limited, but on the increase. Seven clubs are accredited to the Greek Federation.

One of the most recently established is Athens Cricket Club. Nick Geronimos co-founder of ACC (the Owls), says the game is ideally suited to the Greek temperament.

“Lots of strategy, lots of discussion, but not too stressful except when absolutely necessary.”
Geronimos is keen to point out that Greek Australians are playing a big part in developing the game in Greece, and any support from Australian cricketing bodies would be “appropriate and hugely helpful.”

Winning Division 4 would mean Greece is eligible for associate membership of the International Cricket Council, which would open more opportunities for moving Greek cricket forward, so there’s all to play for.

Eligibility for the national team is dependent on a player’s residence in Greece for a minimum of three months, and the Federation is keen to attract players from Australia for coaching and playing. The current weakness in the national squad, Iosif admits, is in the batting.

“We need a strong opener or number 3 or 4, a ‘Ricky Ponting’ to secure the innings.”

With the federation keen for the national team to play down-under next summer, Iosif wants to contact teams and individuals in Australia that can help make it happen.

“It’s about cultural exchange as much as sporting exchange. When a team from here goes to Melbourne or Sydney they exchange philosophy, their thoughts. We want to connect the cultures, to build a bridge.”

At a time of stringent cuts in government subsidies to many Greek sporting federations, financial assistance for the Cricket Federation has been maintained, largely due to the backing of Angela Gerekou, the Greek Deputy Minister of Culture and Tourism, who shares the Federation’s vision.

“The minister has been very supportive of the Federation’s work” says Iosif. “Without the government’s help we could not operate”.

For Australian clubs and players wanting to play in Greece, Corfu is hosting the first International Cricket Festival this year.

Running from May until July, and then again from September to the end of October, any team or individual players, can contact the Federation to take part.
The last time an Australian team showed up in Corfu to grace the historic wicket in the heart of Corfu town was 12 years ago.

There can’t be many more beautiful settings in the world to play that sweet cover drive or deliver your tantalizing googly, surrounded by elegant arcades, fine Venetian architecture and palm trees gently swaying in the warm Ionian breeze.

All this and frappes too. So come on Aussie come on!

For more info on the festival and national team enquiries go to www.cricket.gr contact@cricket.gr