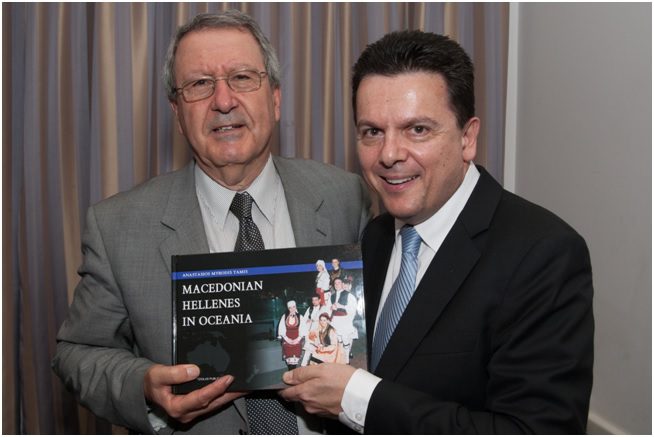 Launched in Adelaide this month, over 150 people attended the event held at the Hellenic Macedonian Cultural Centre in Thebarton. The book launch was a multicultural event attracting a wide variety of guests from the Macedonian, Greek and Australian community in Adelaide.

Professor Tamis’ book explores the important contribution Macedonian Hellenes have made to the culture and socio-economic prosperity of Australia, and within the pages of this significant publication are described aspects of community life, settlement, community organisations, networks and community
members, supported by an array of interesting historical photos.

Professor Tamis said that “history and archaeology are the two important sciences which cultivate the memory of the people. This book has been written for the dead and those who have not been born to preserve the memory and input of their forefathers in this country”.

Senator Nick Xenophon said “this is a landmark book not just about Macedonian Greeks in our region but also about the broader contribution Hellenism has made. It is significant because it tells stories that need to be told and recorded in what is a historical document”.

The event included a supper of traditional food provided by the Ladies Committee of Vergina, including popular Greek Macedonian pita and Greek sweets.