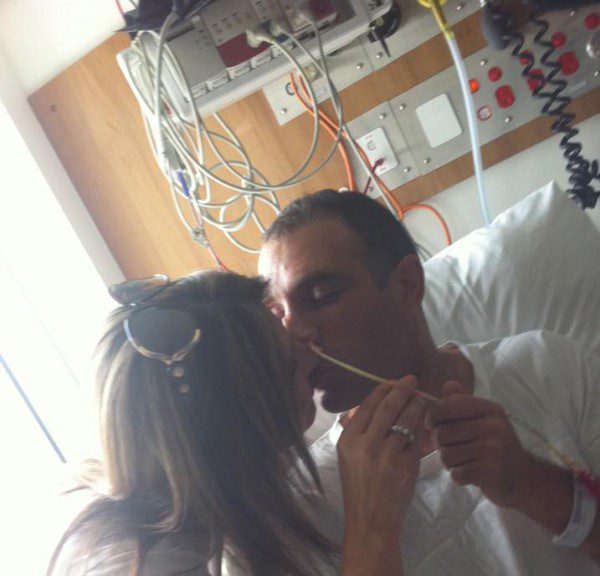 Brain cancer kills more children and people under 40 than any other disease in Australia, yet there is not enough awareness about its causes and treatments. Survival rates are extremely low in contrast to the comparatively higher chances of survival for Australians diagnosed with other types of cancer.

Treatment costs are very high, but hospitals and patients receive only a small fraction of federal government cancer research funding.

Filli Kaoullas, 45, a former PR manager and entrepreneur, came across this shocking reality when her 47-year-old husband Andy was diagnosed.

“I noticed mood swings and initially I thought his behaviour was a result of the amount of pressure he receives at work,” Mrs Kaoullas tells Neos Kosmos.

“While he was making coffee he would put his hand over the kettle and wouldn’t feel the pain,” she adds.

Not only did he forget important appointments and responsibilities, but over a six-month period he started to act in unusual ways that worried his wife. Mrs Kaoullas finally convinced her husband to see a doctor by threatening to leave him if he didn’t seek help.

“Progressively his walking changed, too, but he was unable to realise his condition and therefore we were constantly arguing.”

His X-ray came out clear, but she demanded the doctors run more tests. A CT scan revealed a 4.5cm tumour in the jugular foramen – a large aperture in the base of the skull.

“It’s located behind the carotid canal and is formed in front by the petrous portion of the temporal, so we knew it wasn’t operable,” she said.

“We were admitted to hospital that very afternoon as his condition was described as ‘extremely life threatening’.”

Filli and Andy didn’t give up hope. They wanted to prove to their two teenage children, Mihalia and Fotis, that it’s possible to accept and overcome even the most dramatic changes in life.

After an eight-and-a-half-hour operation, Andy was rid of 50 per cent of the cancer, but in exchange, he had lost his hearing in the right ear and his swallowing nerve was paralysed, as well as some of his vocal chords. His vagus nerve and trapezius muscle were also damaged, disabling him further.

Brain cancer costs more per patient than any other cancer, because it is highly debilitating and affects people in their prime. Family members cannot work if they become carers. Filli Kaoulas was about to expand her corporate event management business, but overwhelmed by the expenses and the uncertainty of their situation, she decided to go back to university and become a surgical technician.

She needed this massive career change, which would help her take care of her husband and assist others going through the same situation.

“We didn’t know what kind of financial and medical needs would come up as Australia is lacking in funding for treatment of brain cancer, which is extremely disturbing,” said Kaoullas.

“I definitely had to go back to work but at the same time, spending money on an investment while my family was going through such a crisis didn’t make sense.”

Her exemplary performance as a trainee resulted in the management of the clinic offering her a full-time permanent position at St Vincent’s. Filli will be graduating next month.

Meanwhile, she entered the St Vincent’s Scrub Run for 2015 compelled to raise as much money as she could for the hospital’s Neuro Team. Her initial goal was $500 but in the end she raised ten times that amount.

Filli aspires to start her own support group to inspire other families battling brain cancer and is raising funds via St Vincent’s Scrub Run Everyday Hero program, which will be running until June 25.

“I keep going to prove to other people who have given up that they are not alone and that life can have an even greater meaning when one fights to overcome hardship.”