South Melbourne was green with envy after Bentleigh took out the Hellenic Cup final and the $10,000 prize cheque, with a penalty shoot-out win. JAMES BELIAS reports from Grange Reserve. 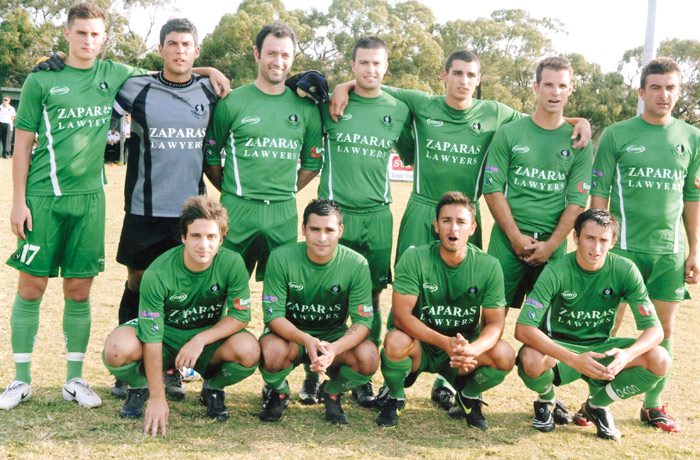 Bentleigh Greens were crowned Hellenic Cup Champions for 2010 after the South Eastern side defeated South Melbourne in a thrilling penalty shoot-out after regulation and extra time could not separate the two.

Gianni De Nittis and Rhodri Payne missed two spot-kicks to win the Cup for South after goal keeper Peter Zois had put Hellas in a commanding position during the shoot-out.

But Bentleigh fought back into the shoot-out and thanks to South’s wayward finishing, the Greens eventually won after a South youngster squandered the sixth and final penalty.

South had been the better of the two sides, despite having played most of the game with just ten men after new signing James Stefanou was given a straight red card for pushing an opponent midway through the first half.

The decision incensed South fans after VPL journeyman George Goutzioulis somehow escaped punishment for what looked like a punch to the face of South’s Payne in only the third minute of the match.

Kingston City’s Grange Reserve was the scene as large crowd flocked to see the last season’s Cup winners (South) and the newly promoted Bentleigh Greens (who are back in the Victorian Premier League).

The souvlaki was fresh, the beer was chilled and the enticing carnival atmosphere of the ground was warm as fans flocked from all over Melbourne for the match. Only the key ingredient was lacking: goals.

Both South and Bentleigh failed to find the back of the net until the penalty shoot-out, mirroring the Third vs. Fourth place match between Heidelberg and Oakleigh. Those teams also needed spot kicks to decide the match, which eventually George Katsakis’ youthful Heidelberg won.

Blustery conditions, a poor pitch and stifling heat made conditions for the players tough. South Melbourne was without Brazilian ex-patriot Fernando De Moraes (away on Australia Futsalroo duties) and hot new signing Carl Recchia who is injured. Stiven Mrkela started in the bench after suffering from a minor groin strain in the semi-final win over Heidelberg.

South found their rhythm more quickly with Englishman and ex-Victory midfielder Joseph Keenan seeing most of the ball for South. He linked well with Joseph Yusef and Danny Vasilevski throughout the match but despite the South midfield enjoying a lion’s share of the possession, the side’s final pass forward was lacking.

South fans have bemoaned the sparsity of Hellas’ strike force throughout the preseason, and nothing their side showed at Grange Reserve will allay those fears.

The turning point of the half was the Stefanou send-off, which briefly allowed Bentleigh to regain their footing in the match. But whenever Bentleigh threatened, South defenders Rama Tavsancioglu, Steven O’Dor and Eddie Cetkin were there to clean up.

When the second half picked up, it was more of the same, with both sides failing to fashion any meaningful chances. Bentleigh’s George Stavridis in the right back position was particularly impressive while his team mate Tony Ouliaris was lively but spurned a good chance for the Greens with a long shot.

The game was turned on its head when Tex Apostolakis was sent off for Bentleigh by the referee after head butting South keeper Zois in the face. Zois took exception to a very late body check after he had comfortably caught a floating ball. The match levelled in terms of personnel on the park, South wasted little time in re-exerting its authority on the match.

The best chance of the game fell to South Melbourne after the Albert Park side caught Bentleigh on the counter attack in the second half.

De Nittis had a shot saved well by the Greens’ custodian, with the rebound falling to another of South’s new signings, Danny Vasilevski. His shot was blocked by a Greens defender, with the second rebound saved by the goalkeeper. The triple chance would be the closest South got to breaking the deadlock.

Yusef Yusef was brought on by South and with a searing run down the right flank, the nimble-footed speedster cut in between two defenders but failed to put his shot on target.

Only in the second period of extra time did Bentleigh look like taking the win, when they began to level up the midfield battle. Though the Greens wasted at least one golden opportunity, they wrapped up the win and the $10,000 prize cheque in the penalty shoot-out.