Life through a lens

As Anastasia Trahanas documents and gives voice to the marginalised and vulnerable of society, she pushes boundaries and perceptions of reality 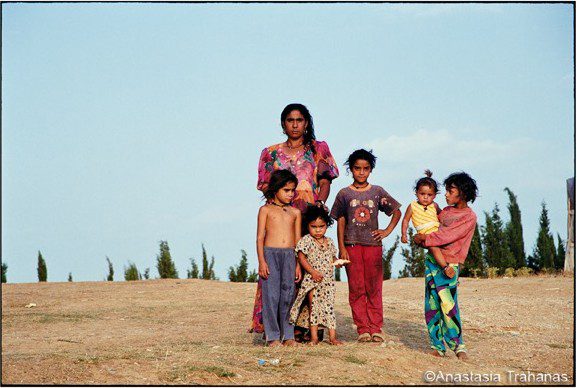 It was a father’s wise words that inspired the exciting trajectory of Anastasia Trahanas’ journey so far: “You can achieve anything you want in life,” he said.

This customary, yet purposeful statement encouraged the UK-based artist to submit a black and white image entitled Sleeping Man into a photographic competition; a decision which saw her win second prize, instilling confidence to further pursue her passion.

Although a photographer, Anastasia presents more so as an anthropologist, with a deep-seated hankering to communicate her observations to the world.
It was a trip to her parents’ Greek village of Tripolis at the age of 12 that started to develop her perceptive eye.

There she first encountered the Roma people (an Indo-Aryan ethnic group, living primarily in Europe), which would plant the seed for her short documentary film Not in my Backyard as part of a Master of Arts in visual anthropology.

In the film, she explores the tensions between the local Greek people and the Roma community, who find themselves marginalised and without access to basic human necessities such as running water.

“I recall through my child eyes I was so fascinated with these colourful, flamboyant, whimsical beings wondering through the streets, sleeping under tents. I recall wanting to capture these people,” Anastasia shares with Neos Kosmos.

Often described as a ‘yes’ person, she continues to grow as an unguarded individual, constantly seeking to provoke her audience into questioning whether – as she puts it – “one human being is less important than the other.”

Though she is optimistic, she acknowledges the reality of the situation.

“I think it will take a long time before the tension between Greeks and Romanis subsides. I believe there has been some progress and many of the children do go to school for education … I believe education is a great influencer of changing behaviour,” she says.

Most recently, the photographer exhibited a collection of nude images entitled ‘Naked Britain’.

Commencing in 2005, the raw and confrontational project has personal identity and the acceptance of self at its core, in part inspired by the artist’s own experiences of self-discovery.

“As a young girl and during my teenage years having discovered my passion within photography I use to set up the camera on a tripod and unconsciously photograph myself or friends semi-nude without faces. This was an exploration of the self, my friends and my surroundings, without exposing too much,” she shares.

“‘Naked Britain’ allows people to question their bare self not only as part of being naked without clothing, but metaphorically naked within themselves.”

Granting complete control to her subjects from the get-go, people volunteer themselves through the photographer’s website, after which they select their own shooting location, and can add their own testimonial to accompany the image.

Born in Melbourne to Greek parents, for Anastasia it was her late father that played an important role in shaping her views and identity.

“I recall listening to the radio when he had an hour slot on the multicultural community radio station 3ZZZ and on one show he was discussing women’s rights and strengths. I would say that in itself is challenging the boundaries within a patriarchal Greek society. He was very much a left wing man who believed in human rights and equality for people,” she tells.

His passing in 2009 proved to be one of the most emotionally challenging times for the photographer. Though like most creative souls, the process of dealing with loss sparked new ideas, giving birth to a new project.

“I found myself clearing my father’s wardrobe with my mother, and I decided to keep all of his ties. Some of these ties I had gifted to him for fathers day. It’s interesting… they are biographical objects that sometimes may help in the grieving process. Through this experience I was inspired to begin yet another photographic project entitled Ties That Bind. I have so far photographed two women – one wearing her father’s waistcoat and the other wearing her father’s tie,” she says.

While Anastasia has never shied away from expressing her views and beliefs, she is not one for labels, finding them limiting, restrictive and often misleading.

“For example, I don’t actually outwardly call myself a feminist. Sometimes being part of these categories that society puts upon us creates more problems than not. I do believe in women’s rights, but there is also a lot more that I believe in. Don’t put me in a box,” the photographer explains.

After completing her private secondary school education, Anastasia went on to what she describes as “a very painful 18 months working in the banking sector”, an experience she likens to being locked in a birdcage.

Setting herself free, she went on to work as a screen printer, which led her to study photography – a degree she never completed in theoretical terms, but vastly made up for in experience.

“By this stage the camera had really become a big part of my life and I was going off to travel when I could – meeting and capturing life around me. I began to live that Gypsy life! That lifestyle went on for a good 10 years, or even longer,” she says.

The photographer has travelled extensively to India, the Amazon, to Soweto in South Africa, the Philippines, Greece, and beyond. Knowing in her heart of hearts that her future would not unfold down under, after a year and half in Geneva, Switzerland the artist decided to base herself in the UK to pursue photography.

Arriving in the winter of 1991, 25 years on she continues to call London home.

“I tell you, it certainly wasn’t a smooth ride for some years. I certainly lost myself before finding myself in London. All of this has been part of my creative process. But the city gave me great inspiration and drive to keep on living in the UK. It truly is a city capital of the arts.

“Europe gives me the sense of life. Within a couple of hours of travelling you could be in a totally different country, landscape, language, food and traditions. I feel like I am more part of the world,” Anastasia explains.

Though she admits to a love for returning to Australia, a landscape of much natural beauty and with which she deeply identifies.

It was in Melbourne, as a younger woman, that Anastasia started to document the life around her. She recalls taking her camera into the Greek Orthodox church her mother would frequent to document the service and those attending in black and white film.

Over the past two and half decades, living in one of Europe’s busiest and densest cities: London, a melting pot of cultures, has continued to inspire the photographers’ work.

“Documentary photography runs throughout my work. There is always something to document. The same time every day, or mundane action, may have a very interesting element to it that could be captured and documented,” she explains.

“Carrying a camera around with me I suppose has trained me to look around and to be more observant with what’s going on – it drives me to stop and look at what I may have not seen otherwise.”

Apart from her personal projects and teaching photography part-time, Anastasia has taken her skill set and interest of people and their behaviours to the next level with her master’s degree at Goldsmiths, University of London.

But she’s not stopping there. Currently the photographer is in discussions with the university’s Department of Visual Cultures about embarking on a PhD. If this comes to fruition, she is already bursting with ideas and hopes to turn her attention to her birthplace, as a continuation of a project she commenced in the summer of 2014.

A love of researching indigenous cultures and tribes led the photographer to Smith street in the Melbourne suburb of Collingwood where she approached and befriended a group of Aborigines who granted her the opportunity to photograph them.

“I was in awe after meeting them. I felt ever so privileged to have been allowed so closely into their lives. Approaching someone who has been so discriminated against with a camera is not an easy task. I have only touched the tip of the iceberg getting to know and photographing these people.

“It’s important to capture and document these people; they are one of the oldest races in the world. A positive portrayal of Aborigines I believe can give them a voice and move them forward within society,” she explains.

Although the photographer has used other mediums, such as film, she continually finds herself drawn back to the camera, which she labels an “extension” of her being.

Over the years, she has thought deeply about her craft.

From the way an image communicates with people, to the process of capturing an image and the way it taps into her own unconscious mind.

“Taking photographs sometimes has an element of unconsciousness just before shooting, and it is in retrospect when viewing the image that you grasp onto the emotion, the feeling, some consciousness of what was really happening during that moment. It has sometimes presented me with surprises. Yet in contrast, many times I am very conscious of what I am capturing which has been the deciding factor of wishing to take the image,” she explains.

Despite the many advances in digital photography she trained using traditional format film and makes it clear that she isn’t a fan of the many alterations that can now be made by photographers.

“I feel cropping is like an amputation of what I originally saw and captured. I make some colour corrections but don’t do airbrushing,” she explains.
In that sense Anastasia is not only a photographer, or an artist for that matter; she is also a reporter, documenting and sharing images of the world as she sees it – and always the uncensored version.

And this is the uncensored version of Anastasia Trahanas:

“There is no real ‘normal’ because reality is so subjective. It is socially constructed by society in order to keep some control, ethics, and order.

“I love to be thrown into the unfamiliar, the unknown, it feels like an awakening of the senses, and I think that is how my photography grows. I have always approached life without much fear. Having a camera as an extension of my being almost gives me the licence to enter into taboos, don’ts and whys.”

Isn’t that what true art is meant to do? Venture into the unknown, challenge boundaries and raise questions? My, how very refreshing.

To view Anastasia Trahanas’ work, or to contact the artist, visit www.nakedbritain.org.uk/Home.html