Greek Australian golden-girl Lydia Lassila touched down in Melbourne yesterday following her Winter Olympic triumph in Vancouver. Thomas Andronas was there to greet her. 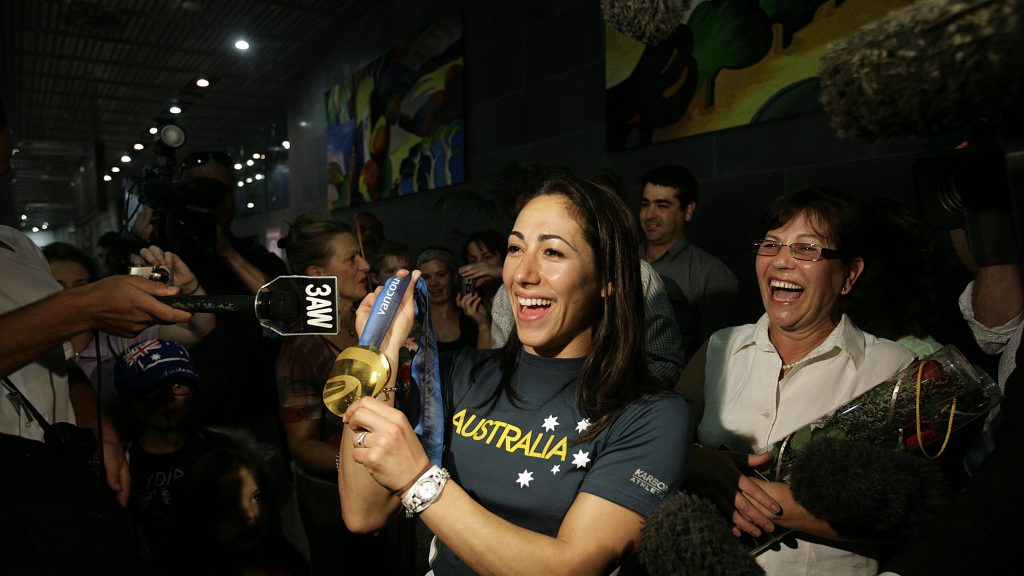 Lydia Lassila with mum Phyllis and the treasured gold medal.

The wait was tremendous.

I’ve believed in myself for a long time and everyone else here has as well. But to finally have done what I wanted to do is an amazing feeling, so it’s a very satisfying moment. Great to bring this baby (her gold medal) home as well.

Her plane touched down at 9:25am, but it was half an hour before Lydia Lassila (nee Ierodiaconou) emerged from the arrival gate. The cheer was enormous.

Her brothers whooped and whistled.

Her mother Phyllis wrapped her up in a big bear hug.

And her dad, Chick, stood quietly aside and gazed at his daughter with such wonder and admiration that it showed he was the proudest dad on earth.

She was clearly happy to be home. “I haven’t been home since October 24th, and that was for ten days. I’ve been away for about ten months this year, so it’s nice to have my feet on home soil and get to share this now with the most important people of my life, so it’s going to be great,” she told Fairfax radio.

For someone who spends a large amount of her time sailing through the air, four stories off the ground, she is incredibly grounded, clearly grateful for the huge amount of time and effort that so many people have devoted to her Olympic win.

“I’ve believed in myself for a long time and everyone else here has as well. But to finally have done what I wanted to do is an amazing feeling, so it’s a very satisfying moment. Great to bring this baby (her gold medal) home as well,” she said.

“Whether or not I won a medal I’d have the support of all my family and friends, they’ve just been awesome my whole journey, so its really, really great to see everyone. My brother has had a new baby, Sophie, so it’s really great to meet her for the first time today as well.”

The one thing that Olympic gold medallists have in common is that they leave nothing to chance.

“I had done the best jumps that I possibly could have and put everything into that performance. I think I really handled the pressure well and I really wanted to do well, so when I landed, there really wasn’t anything I could give, no regrets. So if it was silver or bronze or fifth I can walk away knowing that I’d put everything possible into this sport and into my effort and getting there and doing my best. Gold is just the icing on the cake. It’s something I’ve dreamt of my entire life, so it’s really great,” she said.

Other than eating a massive bowl of her mum’s pasta, Lassila is unsure at this point what her next goal will be, but she is sure that she wants to spend more time at home.

“I haven’t decided yet. I mean, so much preparation and time went into getting this, getting to Vancouver and doing my best there, so I need a bit of a break to realise what I’ve achieved there and enjoy that. And then hopefully get back on the horse and try and get some facilities built at home so that I can train at home with my team-mates as well and get some more youngsters involved in this sport.”

“I’d really like to see a water ramp facility built at home. We spend about five to six months training on a water ramp facility in other areas of the world, recently in Switzerland and previously in Utah and Canada, so I think to get some more depth into our program and increase participation we’re going to have to bring something home so that people can train locally and not have to spend a good ten months overseas. It’s worked, and the Australian government has been amazing in supporting us and allowing us to train overseas at some great facilities and with the best coaches, but if we want to keep that going we’re going to have to change a few things and bring it home.”

Thomas Andronas is a journalist with the Fairfax Radio Network and a regular contributor to the Neos Kosmos.