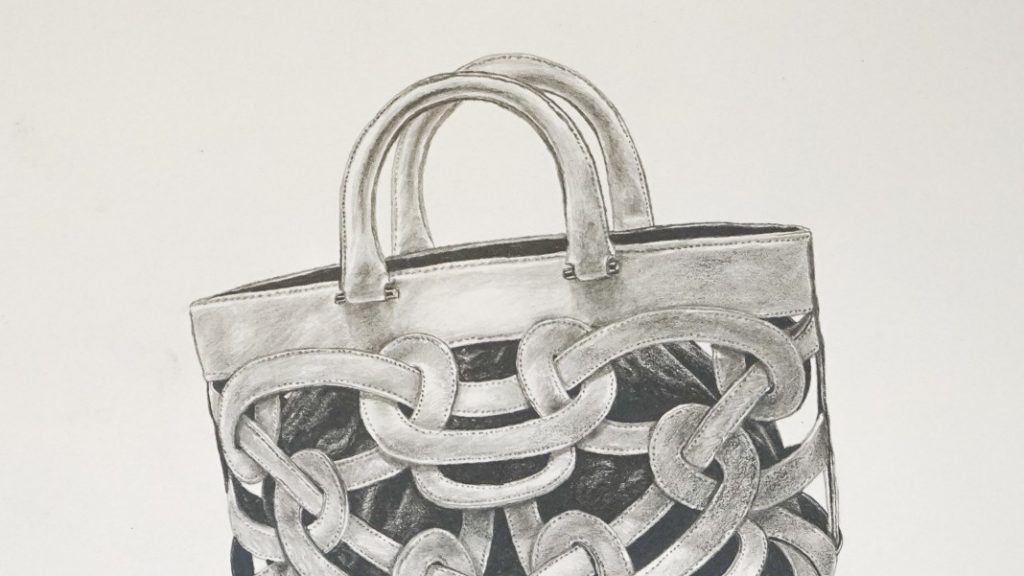 Zeus Disguised As A Handbag: Zeus, the supreme god of the Greek Pantheon, constantly pursued women, seducing them in various disguises, a swan, a bull. Here he is in another disguise – retail therapy.

Melbourne-based Philhellene Max Grierson realised from a young age that knowledge of mythology helps us comprehend other cultures through art, hopefully so that we can understand them on a deeper level.

In his latest collection of drawing works, named ‘Myth and Legend Goes Pop’, Grierson claims that “pop can be interpreted as deflationary and/or as popular”.

Advertising, and particularly fashion images, are the basis of most of the drawings, which are then adapted for parody or satire.

Often the original images have an element of the fantastic in them. There is no intent to harm the right of integrity of the originals, only to promote a sceptical response to them.

There is some social criticism as well; the view that people are only valuable as consumers and everything is a commodity.

Grierson lives in Albert Park and, as he tells Neos Kosmos, he is surrounded by Greek families.

He has travelled to Greece on several occasions, but his first contact with Greek mythology was when he was at high school in Victoria’s country town of Bendigo.

“In the local gallery, I saw a copy of Bernini’s sculpture Apollo and Daphne, and it made a great impression on me.”

He also believes mythology is a form of history and a way of a people’s understanding of their time.

“Fables teach moral truths, such as the sin of pride seen in the stories of Andromeda and Cassiopeia,” he adds, explaining that myths are also a template for customs, institutions and beliefs.

“They tell of the formation of cities (e.g. Athena and Athens). There are stories of irreconcilable conflicts, the Titans as a primitive culture overcome by a superior civilisation.”

Grierson was head of the art faculty at Caulfield Grammar School for a number of years and used to introduce his students to myths through art.

“Artists, especially those of the Italian Renaissance, use mythology as the basis of so many art works, an understanding of it is important,” he says.

“They began to understand that myths are not just stories but ways of understanding the human mind; they have meaning beyond their narrative.”

On asked how ancient myths and legends can be related with the modern way of living, Grierson stresses that “if we understand ourselves better then we have a chance to make better decisions, to penetrate deceit or illusion, to avoid following false gods”.

“My works in this exhibition are about asking people to be critical or perceptive of myth and legend, such as Ned Kelly, or fashion even.
“Art can help us distinguish substance from the irrelevant or vacuous.”

“Freud developed an idea called Antaean Compensation, as he saw us disconnect from mother Earth.

“In mythology Hercules killed Anteus (the Earth’s son), by lifting him so high that he lost contact with the earth, his strength’s source.

“Freud saw this as something that could affect us, and so his theory was drawn from a mythological story. With climate change and other threats to the environment, are we going to be destroyed? We need to be aware.”

* Max Grierson has had a number of solo and group exhibitions, working in the art forms of printmaking, painting and drawing. ‘Work by Max’ was included in the Australian Print Survey which toured Australian State Galleries and he has a biographical entry in McCulloch’s The Encyclopaedia of Australian Art (1994). For 15 years he was head of the art faculty at Caulfield Grammar School and was also their in-house set designer and builder. The exhibition will be on until the 22nd of September at ‘The Memo’ Gallery in the Victorian country town of Healesville (235 Maroondah Highway).