US study offers hope to ‘turn off’ cancer

Greek American doctors at the forefront of new research 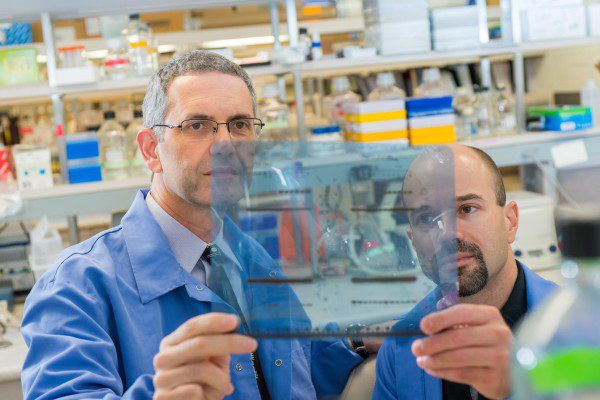 A study conducted by Dr Panos Anastasiadis, a leading Greek American researcher into cancer treatment, has shed light on how cancerous cells can be transformed back into healthy tissue.

Co-author of the study, Dr Antonis Kourtidis, told Neos Kosmos: “This is a basic biological discovery at the cellular level, that improves our understanding of how cells work and what goes wrong in cancer.”

Following five years of experiments, the researchers found a new mechanism within normal cells which suggests that an adhesion structure – the ‘glue’ that keeps cells together – is responsible for suppressing cell growth through molecules known as ‘miRNAs’.

Under normal circumstances, miRNAs prevent cells from dividing when they have replicated sufficiently, a process that fails in tumours, where cell growth becomes uncontrolled.

The investigators discovered that, by restoring the adhesion structure, aberrant growth of the cells was reversed.

According to Dr Anastasiadis the finding represents “an unexpected new biology that provides the code, the software for turning off cancer”.

Published in the scientific journal Nature Cell Biology the study was the product of work undertaken by thirteen researchers based at the Mayo Clinic and contributors from the University of Geneva.

The majority of the experiments to date have been performed on breast, kidney and bladder cancers.

According to Dr Kourtidis, it will be several years down the road before their theory can be put into practice.

“We need to go through a number of steps, which include testing our findings in pre-clinical models, identifying the miRNAs that are affected in each cancer, (since they differ from tissue to tissue), and develop delivery methods for miRNAs…”

The breakthrough achieved by the team raises hopes that it could turn back the clock on cancer cells, and provide a roadmap for developing new therapeutics.

“However, it may always be necessary to be used in combination with other treatments,” says Dr Kourtidis.

Dr Anastasiadis and Dr Kourtidis began their academic careers graduating from the Aristotelian University of Thessaloniki.

Kourtidis, who emigrated to the US from Greece in 2004, says the brain-drain that has increasingly affected his crisis-stricken homeland, dates back in the pre-crisis era.

He blames the negligence shown towards academic institutions and science from Greek political parties, and the society overall, stressing that no country can go forward in the modern world without seriously investing in science and technology.

“There is no reason why Greece cannot be a scientific, academic or the technological hub of the Mediterranean and Europe; the human resource is of very high quality and strongly motivated,” says Kourtidis.

“However, for this to happen, there has to be a new frame that will leave institutions free to work, devoid of any political interventions, and with a serious commitment from the state to invest strongly in academia and science.”

Kourtidis’ advice to Greek students embarking on careers is “to follow their dreams and do the best they can to advance themselves, either in Greece or abroad. At the end of the day, Greece will benefit from having the best-trained personnel, either those that stay there, or get trained abroad but then return.”