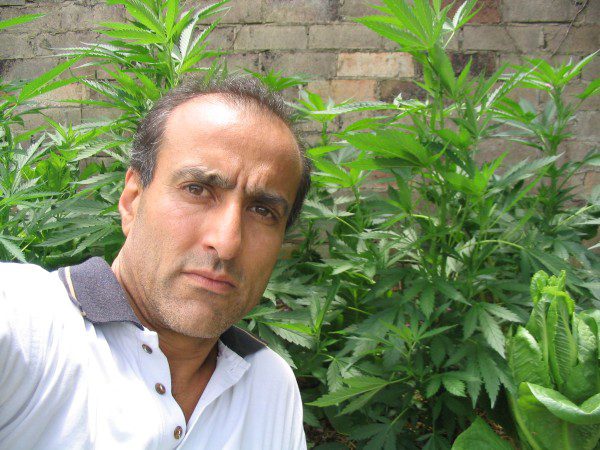 Banned doctor and cannabis oil producer Andrew Katelaris is definitely not a crowd-pleaser.

“Medical cannabis is the best medicine I’ve ever used and when injustice is the law, resistance is mandatory.”

Katelaris, who was de-registered in 2005 for supplying medicinal cannabis to his patients, has dedicated his life to advocating the medical benefits of the plant.

“My signature method is using a specific type of cannabis called cannabidiol or CBD that is believed to have very superior anti-convulsion properties to treat children with epilepsy and patients with chronic pain,” Katelaris told Neos Kosmos.

With desperate families turning to him when traditional treatments fail, the controversial physician says children with intractable diseases have benefited from his alternative prescriptions.

“We have had kids that used to have up to 60 seizure episodes a day and now they have one episode a week,” he says.

According to Katelaris – who has lost count of the number of times he’s been arrested for administering CBD, the holy grail of cannabis medication which, when dissolved with coconut oil, gives a patient good seizure control and better brain function.

“The patient can get a positive response only in a few days and the most spectacular results we get are when we combine significant dietary modifications with cannabis medication.”

Katelaris has been using cannabis medicines to control pain and nausea in his patients since the 1990s, aiming to minimise the amount of debilitating conventional drugs used.

With medicinal cannabis still illegal in Australia, he’s unimpressed with the Australian Medical Association’s conservative attitude towards the treatment.

“The corporations are wilfully making us sick. Look at the epidemic of obesity, the epidemic of diabetes and cancer. The AMA is doing nothing about that. We are dominated by a system that’s playing on the sick. There’s no doubt about that.

“We live in mad and immoral times where hypocrisy is refined into an art. Governments are making people sick by poor diet and then by prescribing poorly-tested medicines whose results are exaggerated by marketing companies. Unfortunately, people just can’t see it,” he says.

“No one talks about the cancer epidemic and how detrimental chemotherapy can be for a cancer patient.”

Katelaris’ philosophy is underpinned by his view that ‘junk food’ and ‘junk media’ have managed to morally emasculate the population to a point where laziness and ignorance prevent people from taking action to improve health outcomes.

While Sydney University has recently received a private donation of over $30 million to undertake research into cannabis’ medical benefits, Katelaris says the cash would be better spent elsewhere.

“It’s academic nonsense, money wasted, when it could be used to treat every epileptic child in the country,” he says.

For Katelaris, the case was first proved in ancient scientific studies which began in China about 4000 years ago and he says cannabis’ role in seizure control has been well-documented ever since. Both Greece and China have used cannabis in medical treatment and it became a popular medicine in Europe in the 19th century.

The banned doctor, who says his proposals were rejected twice by former Prime Minister Tony Abbott, is hopeful that the new PM Malcolm Turnbull will adopt a “much more intelligent position on the cannabis debate”.

Asked how far he’s prepared to take the issue and at what personal cost, the unconventional physician is forthright.

“I’m doing the right thing, which gives me an enormous amount of confidence. Small personal sacrifices are meaningless when you look at the scale of the issue,” he says, adding that his only regret is that he’s not treated more people with the illegal substance.

“I treated 20 children whose parents were told their kids would die within years. I’ve seen them growing into normal, happy children. Every time I see this my conviction gets reinforced.

“Medical cannabis is the best medicine I’ve ever used and when injustice is the law, resistance is mandatory.”