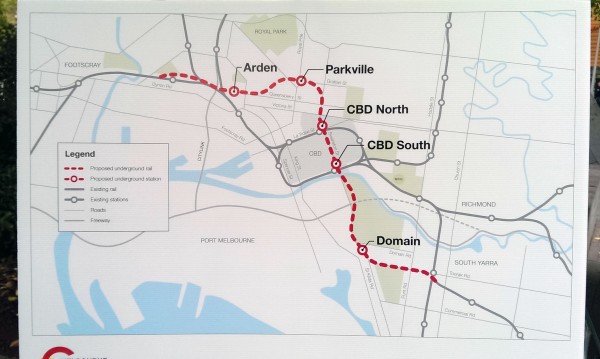 The Victorian government has revealed its new Melbourne Metro Rail Tunnel project is likely to cost a score of business and home owners their properties.

Construction of the tunnel is set to begin in 2018, and will stretch nine kilometres from South Kensington to South Yarra, running under Swanston Street.

Public Transport Minister Jacinta Allan said the project could affect hundreds of properties. “At this stage there’s an expectation that the number of properties that will need to be acquired will be in the hundreds,” she said.

“The final number will be settled and of course made public once the final scope of the project is locked in.”

The government has reportedly sent letters to 21,000 business and home owners who will be
potentially affected.

Victorian Opposition Leader Matthew Guy was critical of the government’s announcement – accusing it of misleading the public, even going as far as saying it had lied.

“Come out and tell the truth. Whose house is going to go? In what areas will houses go? And how many people are going to be affected?” he said.

“What we’ve seen from the government today is far from honest and certainly far from consultative.”

The government has yet to reveal which properties would be compulsorily acquired, with homeowners within the proposed route feeling shunted.

“I thought they could dig tunnels without all the destruction of homes. That’s what they did in London. It’d be more expensive, but surely that’s better than taking people’s homes away from them,” North Melbourne resident Catherine Duniam told The Herald Sun.

The previous Napthine government faced heavy criticism for its proposed $18 billion East West Link which would have acquired approximately 118 properties in the process.

The project was scrapped by Labor, who claimed the contract was “not worth the paper it’s written on”, which included $3 billion in Commonwealth funding.

But in the latest twist, Prime Minister Malcolm Turnbull has opened up to the idea of Commonwealth funding for the project. His predecessor Tony Abbott refused to commit the $3 billion in federal funding set aside for the East West Link, saying it was in a “locked box” that could only be accessed by any government willing to build the road.

Mr Turnbull has said funding for infrastructure projects “should be assessed on its merits” rather than exclusively for funding roads.

“These are decisions again that need to be taken carefully but certainly we will look at it very carefully and with a very open mind,” he said.

The Andrews government is still hopeful of acquiring federal funding for the rail project.