Alex and Eve: Can you mix oil and water?

Following its successful run as a stage play, the cross-cultural comedy of Alex and Eve, by Alex Lykos will make it on the big screen, in a movie directed by Peter Andrikidis (The Kings of Mykonos, Wog Boy2, East West 101).

The much-anticipated adaptation, to premiere in national cinemas on 22 October, was filmed in western Sydney’s suburbs, and follows Alex, a Greek Orthodox man who falls hopelessly in love with Eve, a Lebanese woman.

“The Australia I know and live in is full of amazing cultures and when I walk down my suburban street, I see a diverse mixed ethnicity of residents, which has been ignored on our film screens for a long time.”

In an effort to inspire respect towards all cultures and religions, the creators of the film aim to put across a message of unity through a love story.

“We need more films like Alex and Eve,” Peter says.

“Most of us have travelled to different destinations and learnt to accept and ‘not fear’ people we are told are ‘different’.

“There is no such thing as ‘different’ as in the end we are all from the same tribe; humanity.” 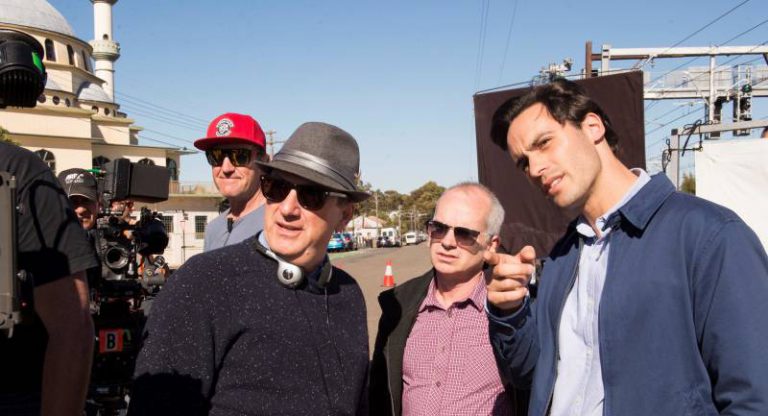 With actor Richard Brancatisano behind the scenes.

The film explores Australia’s urban multiculturalism with both the Greek and Lebanese families in the most realistic way possible.

“This term is very familiar to me, having directed all 20 episodes of East West 101 which was a career highlight for me – and really put me in touch with the amazingly diverse culture of actors in this country,” Peter says.

“I think Alex and Eve, for me, was an extension of this but in a more comedic tone.”

The hardest part was to research and direct the Lebanese material – as there are so many opinions on how a family works and how weddings are done.

As religion functions differently in the family unit, the production team tried to find the best material and cast actors who could speak Arabic and were or had been of Muslim background.

“We had an Islamic advisor on set for the Lebanese family material to be able to properly touch on their culture,” he says.

“Andrea Demetriades, Rahel Romahn, Simon Elrahi, Helen Chebatte and Wafa Lahoud did a lot of research for their roles and most were fluent in Arabic.”

Surprisingly, Peter selected a Greek actress to embody a Lebanese woman and an Italian man to play the Greek male leading character.

“We did extensive casting for six months and finally chose Andrea Demetriades as Eve – because she is truly an amazingly gifted actor; world class,” the director says, whilst emphasising her comic timing and dramatic acting.

“We then auditioned Andrea with various leading male actors and I found the chemistry between Richard Brancatisano and her to be the most truthful. They are brilliant together.”

Meanwhile, Peter believes that there is sometimes a naive innocence from the older Greek generations to protect their offspring, but their heart is always in the right place. 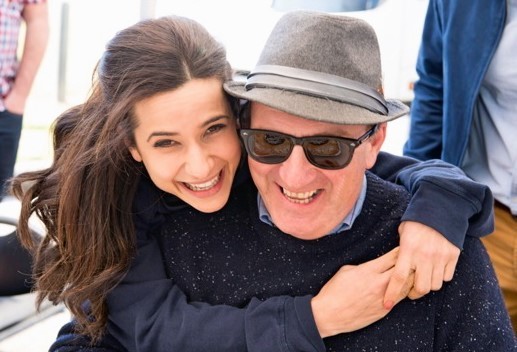 Both Peter Andrikidis and Alex Lykos have parentage from the island of Samos, therefore it was essential to work with a script that touches upon the ways of Greek migrant families. To Peter, however, this love story is somewhat more familiar as his mother is Irish Australian and his dad is Greek, born in Alexandria, Egypt. “My parents are a mixed couple who fell in love and married at a young age in 1958 and have just celebrated 57 years of marriage,” he enthuses. “They represented the new Australia of the 1960s and went through some of the ups and downs of the characters inAlex and Eve.”

As Peter was brought up in a house with his grandparents and parents living under the same roof, he learned to understand the Greek humour and drama in the scripted material.

In fact, he put a generous touch of his grandfather Pandelis Andrikidis in Alex’s father George, played by Tony Nikolakopoulos.

“My grandfather was very strong and opinionated as head of the family and wanted the best for all his children,” he adds.

“It’s all about family and making a better life for your children – this is a universal mantra for all cultures worldwide. This is for me the essence of Alex and Eve.”

The film will first be screened at The Delphi Bank Greek Film Festival, which opens next Tuesday 14 October, followed by an encore screening on Sunday 18 October.

For more information, screening venues and bookings go to info@alexandeve.com.au