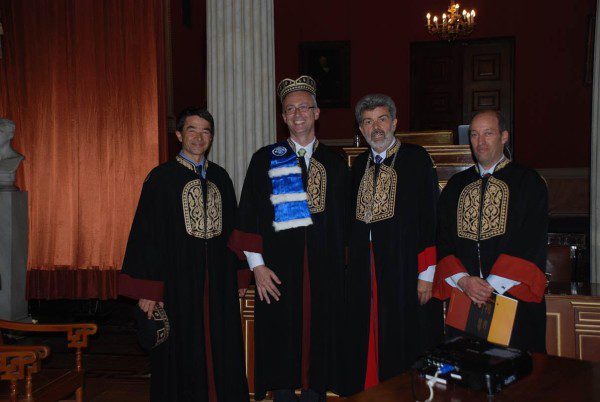 Professor Christopoulos (second from left) with colleagues from the National and Kapodistrian University of Athens.

An Honorary Doctorate of Law has been conferred on Monash University Professor Arthur Christopoulos by the National and Kapodistrian University of Athens for his international contribution to pharmacy and pharmacology.

The award ceremony was held in Athens last month. Αmong the guests were the dean of the faculty of pharmacy at Monash University, Professor Bill Charman, and representatives from the Australian Embassy in Athens and the Greek Academy of Science.

Being a first generation Greek, born in Australia to migrant parents, Dr Christopoulos, who works at the Institute of Pharmaceutical Sciences at Monash, is intimately connected to his Hellenic heritage and feels his professional success is a credit to his parents’ struggle.

“I was the first person in my family to finish university and it’s good to see that my parents’ sacrifices have not been in vain.

“The award is obviously a mark of international prestige and for me in particular an honour, because it’s my parents’ homeland that is recognising the achievements of the Greek pharmacologists. This ceremony made me feel emotional for many reasons”, Dr Christopoulos told Neos Kosmos.

Fascinated by science as a student, he could not imagine that a few years later he would embark on a distinguished academic career.

“It wasn’t until my university studies that I realised I enjoyed the knowledge and the pharmacology so much that I wanted to take it further,” he says.

“When I practised as a pharmacist I could see that the medicines we dispense are suboptimal. There are diseases poorly treated, while others cause a lot of side-effects and I knew that I wanted to make a difference, I wanted to change that.”

After gaining a PhD at the Victorian College of Pharmacology, he spent two years as a postdoctoral fellow at the University of Minnesota, before returning to Australia to set up a research laboratory.

Now a leading scientist in his field, he specialises in drug discovery for schizophrenia, diabetes and obesity.
By targeting a specific family of proteins in the body, called G proteins, Dr Christopoulos and his colleagues have developed a new approach to disease treatment.

The group’s key focus is designing drugs with increased selectivity that can offer an equally potent treatment, while side-effects are eliminated.

A year ago Dr Christopoulos and his team of researchers made a major step forward in treating cardiovascular disease with their development of safer drugs for heart attack victims.

As Dr Christopoulos explains, his research has opened a lot of new doors, allowing the pursuit of exciting ideas in an academic environment, but also facilitating a connection with pharmaceutical companies to turn the ideas into reality.

“I get the best of both worlds. It allows you the intellectual freedom as opposed to being stuck at the whim of corporate decisions.

The prolific academic, who has authored more than 200 scientific articles, is considered the highest-cited pharmacologist in Australia and was listed by Thomson Reuters among the one per cent of the world’s most influential scientific minds in his field in 2014.

The recipient of numerous distinctions, getting the top nod from the University of Athens is more than a major honour in recognition of his achievements.

According to Dr Christopoulos, it serves as an opportunity for stronger ties to be developed between the Australian academics and the University of Athens to support students and young researchers in Greece.

“It is almost like having an Emeritus position over there, so we can try building stronger links.

“Especially for promising young researchers, we would like to find an avenue to build stronger bridges and also ways to raise funding for some to come and study in Australia.”

In Athens Dr Christopoulos had the opportunity to discuss with other scientists and students and says he met some very bright minds striving to perfrom science within an unfavourable economic environment.

“I was impressed by the vigour, the questions, the drive of these students, but you could also see the frustration of some of them wondering how to go to the next level, given the difficulties that Greece is facing at the moment.

“This award also helped them realise we actually care about the coming generation of scientists and are happy to help, and that’s an important message to get across.”