One of the richest graves unearthed in Greece Alex Zokos, a conservator, removed a bronze jug at the site. Photo: Department of Classics/University of Cincinnati

Archaeologists digging at Pylos, an ancient city on the southwest coast of Greece, have discovered the rich grave of a warrior who was buried at the dawn of European civilization.

He lies with a yardlong bronze sword and a remarkable collection of gold rings, precious jewels and beautifully carved seals. Archaeologists expressed astonishment at the richness of the find and its potential for shedding light on the emergence of the Mycenaean civilization, the lost world of Agamemnon, Nestor, Odysseus and other heroes described in the epics of Homer.

“Probably not since the 1950s have we found such a rich tomb,” said James C. Wright, the director of the American School of Classical Studies at Athens. 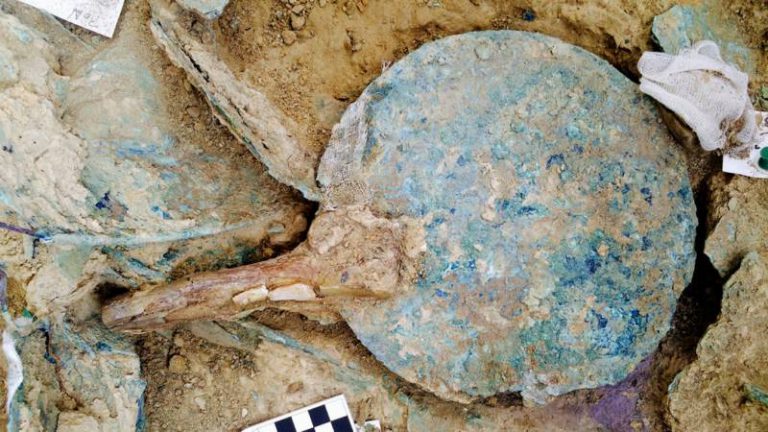 A bronze mirror with an ivory handle found in a grave of a warrior at Pylos in Greece.CreditPhotot: Department of Classics/University of Cincinnati

Seeing the tomb “was a real highlight of my archaeological career,” said Thomas M. Brogan, the director of the Institute for Aegean Prehistory Study Center for East Crete, noting that “you can count on one hand the number of tombs as wealthy as this one.”

The warrior’s grave belongs to a time and place that give it special significance. He was buried around 1500 B.C., next to the site on Pylos on which, many years later, arose the palace of Nestor, a large administrative center that was destroyed in 1180 B.C., about the same time as Homer’s Troy. The palace was part of the Mycenaean civilization; from its ashes, classical Greek culture arose several centuries later. 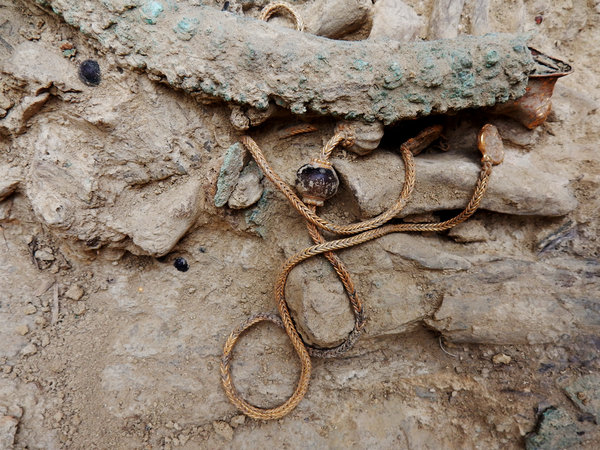 A gold chain and seal stones under the rim of a bronze cup found at Pylos.Credit Photo: Department of Classics/University of Cincinnati

The palaces found at Mycene, Pylos and elsewhere on the Greek mainland have a common inspiration: All borrowed heavily from the Minoan civilization that arose on the large island of Crete, southeast of Pylos. The Minoans were culturally dominant to the Mycenaeans but were later overrun by them.

How, then, did Minoan culture pass to the Mycenaeans? The warrior’s grave may hold many answers. He died before the palaces began to be built, and his grave is full of artifacts made in Crete. “This is a transformative moment in the Bronze Age,” Dr. Brogan said.

The grave, in Dr. Wright’s view, lies “at the date at the heart of the relationship of the mainland culture to the higher culture of Crete” and will help scholars understand how the state cultures that developed in Crete were adopted into what became the Mycenaean palace culture on the mainland.

Warriors probably competed for status as stratified societies formed on the mainland. This developing warrior society liked to show off its power through high-quality goods, like Cretan seal stones and gold cups — “lots of bling,” as Dr. Wright put it. “Perhaps we can theorize that this site was that of a rising chiefdom,” he said.

The grave was discovered this spring, on May 18, by Jack L. Davis and Sharon R. Stocker, a husband-and-wife team at the University of Cincinnati who have been excavating at Pylos for 25 years.

The top of the warrior’s shaft grave lies at ground level, seemingly so easy to find that it is quite surprising the tomb lay intact for 35 centuries.

“It is indeed mind boggling that we were first,” Dr. Davis wrote in an email. “I’m still shaking my head in disbelief. So many walked over it so many times, including our own team.”

The palace at Pylos was first excavated by Carl Blegen, also of the University of Cincinnati, who on his first day of digging in 1939 discovered a large cache of tablets written in the script known as Linear B, later deciphered as the earliest written form of Greek.

Whether or not Blegen’s luck was on their mind, Dr. Davis and Dr. Stocker started this season to excavate outside the palace in hope of hitting the dwellings that may have surrounded it and learning how ordinary citizens lived. On their first day of digging, they struck two walls at right angles. First they assumed the structure was a house, then a room, and finally a grave.

“I was very pessimistic about this,” Dr. Davis said, thinking that the grave was probably some medieval construction, or that even if it was prehistoric it would almost certainly have been robbed. But a few days later, he received a text message from the supervising archaeologist saying, “I hit bronze.” An ivory comb from the site. CreditPhoto: Department of Classics/University of Cincinnati

What he and Dr. Stocker had stumbled on was a very rare shaft grave, 5 feet deep, 4 feet wide and 8 long. Remarkably, the burial was intact apart from a one-ton stone, probably once the lid of the grave, which had fallen in and crushed the wooden coffin beneath.

The coffin has long since decayed, but still remaining are the bones of a man about 30 to 35 years old and lying on his back. Placed to his left were weapons, including a long bronze sword with an ivory hilt clad in gold and a gold-hilted dagger. On his right side were four gold rings with fine Minoan carvings and some 50 Minoan seal stones carved with imagery of goddesses and bull jumpers. “I was just stunned by the quality of the carving,” Dr. Wright said, noting that the objects “must have come out of the best workshops of the palaces of Crete.”

An ivory plaque carved with a griffin, a mythical animal that protected goddesses and kings, lay between the warrior’s legs. The grave contained gold, silver and bronze cups.

The warrior seems to have been something of a dandy. Among the objects accompanying him to the netherworld were a bronze mirror with an ivory handle and six ivory combs.

Because of the griffins depicted in the grave, Dr. Davis and Dr. Stocker refer to the man informally as the “griffin warrior.” He was certainly a prominent leader in his community, they say, maybe the pre-eminent one. The palace at Pylos had a king or “wanax,” a title mentioned in the Linear B tablets, but it’s not known if this position existed in the griffin warrior’s society.

Ancient Greek graves can be dated by their pottery, but the griffin warrior’s grave had none: His vessels are made of silver or gold, not humble clay. From shards found above and below the grave, however, Dr. Davis believes it was dug in the period known as Late Helladic II, a pottery-related chronology that corresponds to 1600 B.C. to 1400 B.C., in the view of some authorities, or 1550 B.C. to 1420 B.C., in the view of others.

If the earliest European civilization is that of Crete, the first on the European mainland is the Mycenaean culture to which the griffin warrior belongs. It is not entirely clear why civilization began on Crete, but the island’s population size and favorable position for sea trade between Egypt and Greece may have been factors. “Crete is ideally situated between mainland Greece and the east, and it had enough of a population to resist raids,” said Malcolm H. Wiener, an investment manager and expert on Aegean prehistory.

The Minoan culture on Crete exerted a strong influence on the people of southern Greece. Copying and adapting Minoan technologies, they developed the palace cultures such as those of Pylos and Mycene. But as the Mycenaeans grew in strength and confidence, they were eventually able to invade the land of their tutors. Notably, they then adapted Linear A, the script in which the Cretans wrote their own language, into Linear B, a script for writing Greek.

Linear B tablets, were preserved in the fiery destruction of palaces when the soft clay on which they were written was baked into permanent form, Caches of tablets have been found in Knossos, the main palace of Crete, and in Pylos and other mainland palaces. Linear B, a script in which each symbol stands for a syllable, was later succeeded by the familiar Greek alphabet in which each symbol represents a single vowel or consonant.

The griffin warrior, whose grave objects are culturally Minoan but whose place of burial is Mycenaean, lies at the center of this cultural transfer. The palace of Pylos had yet to arise, and he could have been part of the cultural transition that made it possible. The transfer was not entirely peaceful: At some point, the Mycenaeans invaded Crete, and in 1450 B.C., the palace of Knossos was burned, perhaps by Mycenaeans. It is not yet clear whether the objects in the griffin warrior’s tomb were significant in his own culture or just plunder.

“I think these objects were not just loot but had a meaning already for the guy buried in this grave,” Dr. Davis said. “This is the critical period when religious ideas were being transferred from Crete to the mainland.”

The Mycenaeans used the Minoan sacred symbol of bull’s horns on their buildings and frescoes, and their religious practices seem to have been a mix of Minoan concepts with those of mainland Greece.

Archaeologists are looking forward to studying a major unlooted tomb with modern techniques like DNA analysis, which may shed light on the warrior’s origin. DNA, if extractable from the warrior’s teeth, may tell where in Greece he was born. Suitable plant material, if found in the tomb, could yield a radiocarbon date for the burial.

This and other techniques allow far more information to be extracted from a rich grave site than was possible with the picks and shovels used by earlier excavators. “We’ve come a long way from Heinrich Schliemann,” said Mr. Wiener, referring to the efforts of the 19th-century German businessman who excavated Troy and Mycene to support his view that the events described by Homer were based on historical fact.