The passion of Vasilis Vasilas: writer, school teacher and storyteller 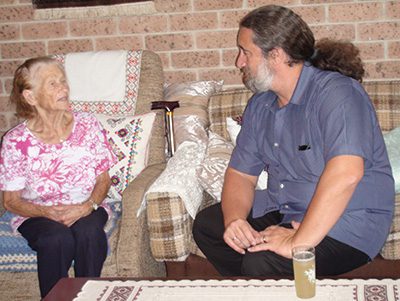 Vasilis Vasilas is not your average author.

By day he is a school teacher with a love of soccer that has seen him coach young kids and take them on tour, and by night you’ll find him researching and working on his passion.

That passion revolves around the communities that have migrated to Australia from Europe post-World War II, and on Sunday Vasilis delivered an overview of his life’s work and achievements to 250 fans and supporters at Rockdale Town Hall in Sydney.

Organised by AHEPA, the event showcased the documentation of the Estonian, Greek and Ukrainian communities in both Australia and New Zealand.

A special analysis was given by Dr Panayiotis Diamandis and Dr Vasilis Adrahtas, themselves no strangers to the written word.
Cultural performances by Greek, Estonian and Ukrainian dancing groups followed, entertaining those gathered and highlighting the strong connection Vasilis has created over the last decade amongst his subject communities.

Vasilis’ parents come from Lesvos, an island that has been in the news countless times this year for its humane treatment and assistance to tens of thousands of refugees.
Proud of his heritage, the author has published two books depicting the journey of Greek migrants from Lesvos, entitled Journeys of Uncertainty and Hope, and Our Homeland: Lesvos.
Both were complemented with photographic exhibitions and the establishment of an online archive with images of those who migrated to Australia and New Zealand, the photographic element giving the author’s work a point of difference.

Since then, Vasilis has gone on to produce another title on the Lesvian migrants to New Zealand, followed in 2012 by his critically acclaimed story on local Greek football, The Giant Who Never Awoke: History and Oral Stories of Pan-Hellenic SC (1957-76).

It’s not unusual to find Vasilis trekking across Australia to interview people.

Easily distinguishable with his portable scanner and laptop, he visits people in their homes, retirement villages, or wherever he can obtain a story of migration.

Vasilis set himself the “challenge to attempt to replicate the work I had done within the Greek community to another community”.

“After four publications within the Greek community I was searching for another challenge. I wanted to avoid being categorised as the writer of Greek migrant stories, like an actor who is typecast,” he explains.

He says the initial idea was to compile and write a book on the journey of migrants and refugees from the Baltic nations of Estonia, Latvia and Lithuania.

But on his quest, Vasilis’ decided to follow a strong current of interest that was developing within the Estonian communities around Australia, resulting in the first volume of Estonian stories.

When he commenced working with the Estonian community, “it was from ground zero – I had no connection with this community”.

“There were questions such as ‘Who is he?’ and ‘Why is a Greek interested in our stories?’ I was fortunate to have a core of Estonian people who really believed in my work, and they helped me overcome any arising problem,” Vasilis says.

The author went through the same process with the Ukrainian stories.

Vasilis attributes his successful completion of books on different communities to one vital factor: identifying people with a similar passion who believe in what can be achieved through images and words.

Vasilis always has something in the works; he is currently preparing a second volume of Ukrainian stories.

“I have grown extremely sympathetic towards the Ukrainian people and their suffering through history. I believe the stories of the Great Famine in the 1930s and forced labour workers in Nazi Germany needed to be collected and published before this generation, who experienced these horrific experiences, passes away and the stories disappear,” he says.

Having completed work on both the Estonian and Ukrainian communities, Vasilis admits to having his sights set on the Hungarians and their migration stories.

But with Australia home to hundreds of migrant communities, it is certain that the talented author will be there to document as many as he can. After all, it is his passion.

For more information on Vasilis Vasilas and his work, email the author directly at vasilisvasilas02@gmail.com

*Billy Cotsis is a freelance writer and short film director.