A journey from Pix Lax and beyond

His name represents a pre-eminent rock star of the previous and current generation in Greece. His unique talent as a singer and songwriter and musician has led him to collaborate with R.E.M., Sting, Haris Alexiou, Giorgos Dalaras and more.
His first band Pix Lax (1989 to 2004) is arguably the biggest group that Greece has produced, with 12 studio releases and further titles resulting in sales in the multi-millions.

Filippos, who has been releasing his own music since the break-up, has toured globally to packed arenas including London, Düsseldorf, Frankfurt, Brussels, Amsterdam, Nicosia, the US and Canada.
In Athens, he regularly sells out the renowned Lycabettus Theatre with 22,000 fans, and played the Olympic Stadium to 80,000 people with the record-breaking Pix Lax reunion in 2011.

This week he has released his eighth solo album and will tour Europe. A rumour that won’t go away is that he may even visit Australia in early 2016.

Neos Kosmos recently visited the charismatic artist at his home in Athens to talk about his career.

BC (Billy Cotsis): As a fan, it’s exciting for me to have the opportunity to talk to the genius behind many anthems and classics over the last two decades from Έπαψες Αγάπη Να Θυμίζεις’ (Love Ceased to Remind) to ‘Δεν Θα Δακρύσω Πια Για Σένα’ (I Can’t Weep for You Any More). For the benefit of people Down Under, can you tell us a bit about yourself?

FP (Filippos Pliatsikas): Firstly, thank you for your kind words Billy. It is my pleasure to be able to talk to you especially as I have never had the chance with the band or as a solo artist to visit Australia. I live in Athens with my family and play music.

BC: You have written for many other artists over the years, which makes you unique in terms of being a consistent songwriter and hit maker. Are there any artists that have influenced you?

BC: Pix Lax were an incredibly popular band, with Monaxia Mou Ola (My Loneliness) to ‘Λένε Για Μένα’ (They Talk About Me) ensuring rock immortality. Your band was known not just in Greece but across Europe. What was it like to be at the forefront of such a well-known band?

FP: With Pix Lax we experienced moments that it was hard to believe we could live. We enjoyed a loving relationship with fans … we were young when we started out and it was magic. I will always cherish what we experienced for the rest of my life, it will always be inside of me. 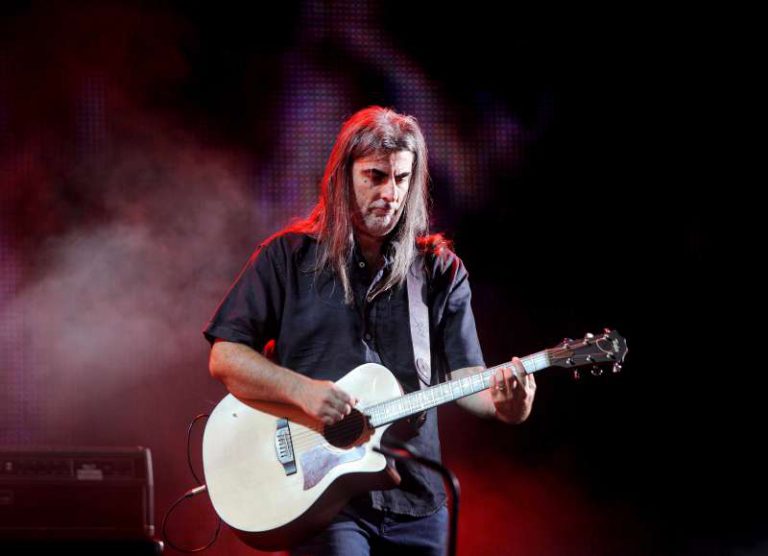 BC: Not to name drop, but you have played with a lot of great musicians such as Sting and I Muvrini. On the new album there are a few great musicians playing with you. What was that like?

FP: Enjoyable. It is always wonderful to play with artists from Greece and abroad, it’s a chance to learn from them and vice versa through collaborations.

BC: I have listened to some of your amazing creations. I understand that you have your eighth album due out at the end of the year. Tell us about the new release.

FP: The album will be released in two versions, a Greek version and an English one. The title is ‘Ένας ολοκαίνουργιος Κόσμος (‘A Brand New World’). It’s the first time I have completed a project this way and I had the pleasure of playing with many international guest participants and friends such as Nina Hagen (99 Red Balloons), Sebastian Koch for the English version. Vasilis Papakonstantinou, Ase Kleveland, John Miliokas, MC Yinka, Nina Fos, Filippos Plakias and Paraskevas Theodorakis also feature, making this an exciting project.

BC: To make this an even more unique experience for the music-listening public, there is a book that is being released as well.

FP: The book is related to the music from this album because the songs are jumping from my story book, it’s titled Onoma, or Name in English.

BC: I remember your album ‘Omnia’ in 2007, which had a different sound to Pix Lax, including a guest reggae/rapper. Do you see a progression and change in sound every time you release an album?

FP: Yes of course there is always a subtle change in my style. There is a need to create new sounds and progress with every recording.

BC: Any advice for aspiring musicians out there?
FP: I have always followed my own path in life and with my music. For people out there, if a path has meaning, then that is a blessing.

* Ένας ολοκαίνουργιος Κόσμος’ (‘A Brand New World’) is out now in Europe and on iTunes in Australia. For more information on the artist and the new album go to www.pliatsikas.com

* Billy Cotsis is a freelance writer and a 2015 nominee for ‘Journalist of the Year’ NSW MIMA.