Remembering the ANZAC POWs at Pylos and Methoni 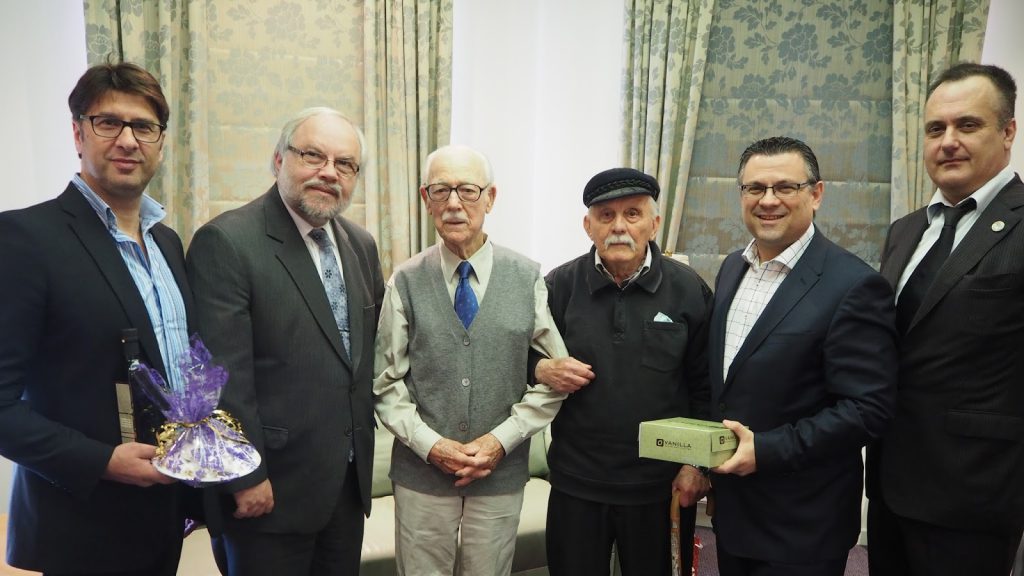 On Sunday 13 December the government of the Hellenic Republic, represented by the Hellenic Ambassador to Australia, His Excellency Mr Charalampos Dafaranos, and accompanied by a small gathering, celebrated the 98th birthday and honoured the service of Bill Rudd, an Anzac veteran from the Second World War.

Essendon-born Bill Rudd served in the Middle East as a Sapper in the 2/7th Field Company, Royal Australian Engineers. He was captured by the Germans during a ferocious engagement as part of the great battle of El Alamein – a battle which began the defeat of the Axis powers in North Africa.

In August 1942 Bill was transported from Benghazi in Libya aboard the Nino Bixio, an Italian transport ship, along with 2,000 other Allied POWs, headed for an internment camp in Italy. POW ships were not identified as such and were often victims of enemy attack.

In waters south west of Greece, 12 nautical miles south west of Pylos, at 4.33 pm on 17 August, Bill’s ship was torpedoed by an Allied submarine. Around 400 of Bill’s comrades were killed in the ensuing tragedy. Many were killed or died in the holds of the ship, as water gushed in and debris crashed on top of them.

At Pylos, the dead and wounded were removed from the ship, the dead being buried temporarily at Pylos. Some of the wounded were taken on Italian hospital ships to Italy. The survivors were taken to the great castle at Pylos. Later they would be transported north and eventually to Italian POW camps.

Bill would escape his captors and see out the war in neutral Switzerland.

The Allied dead and those missing presumed dead would eventually be buried at Athens’ Allied War Cemetery at Phaleron, in war cemeteries in Italy or memorialised at the El Alamein War Cemetery in Egypt.

The Allied submarine – the HMS Turbulent – had only days before its tragic encounter with Bill’s ship been engaged in taking on and dropping off Allied SOE agents and Greek resistance fighters off Crete and Pylos.

Bill has dedicated his life to ensuring that the story of his fellow Allied POWs in Europe is not forgotten, creating and maintaining an excellent website that is linked to the Australian War Memorial.

But particularly, Bill has been hoping that the service and lives of those who suffered in the tragedy of the Nino Bixio in 1942 – and the earlier similar tragedy of the Sebastiano Venier in December 1941 off Methoni – are commemorated in Greece.

A special guest was Mr Nick Georgopoulos, who as an adolescent in Methoni had helped bury some of the dead of the Sebastiano Venier in 1941. He recounted how he had never forgotten that day and the brave Allied soldiers he helped to lay to rest. But one of his fondest memories was of the survivors marching out of Methoni giving the ‘V’ for Victory sign and singing loudly the British marching song, It’s A Long Way To Tipperary.

Mr George Iliopoulis, president of Melbourne’s Panpylian Brotherhood of Navarino, along with Cr Jim Grivokostopoulos, president of the Pantryfilian Association of Melbourne and Victoria, and Paul Sougleris, secretary of the Federation of Messinian Organisations Melbourne and Victoria, are working to make Bill’s desire for a memorial at Pylos and Methoni a reality. In this, they are being assisted by myself.

They are also working to this end with Sydney-based Ms Rhonda Cousens-Georgopoulos and her husband, Peter Georgopoulos, the nephew of Nick Georgopoulos, who have completed much field research into the story.

Mr Iliopoulos, a native of Pylos, presented Bill with a birthday present including produce from the Pylos-Methoni region.

He said that it was an honour both for him and the Panpylian Brotherhood to assist in the erection of a memorial to those like Bill who suffered in these two POW tragedies off the coast of Pylos and Methoni.

“Bill represents one of the enduring links between Greece and Australia. His dedication to the memory of his comrades does great credit to him and is stimulus for us to complete his vision,” he said.

Bill celebrated his 98th birthday with his family on 7 December. Days later, on 9 December, it was the 74th anniversary of the torpedoing of the Sebastiano Venier off Methoni.

The ambassador said that it was honour to meet Mr Rudd and that he had earned the title of palikari.

Among others present at the gathering were Mr Peter Ford, whose father Frank fought with the 2nd NZ Expeditionary Force in Greece and Crete in the Second World War, and Mr Steve Kyritsis of the RSL Hellenic Sub-Branch.

Those interested in supporting the proposal to build a lasting memorial to the Anzac POW’s of Methoni and Pylos should contact Mr George Ilipoulos via email – giliopou@bigpond.net.au

* Jim Claven is a historian, freelance writer and secretary of the Lemnos Gallipoli Commemorative Committee. A Philhellene, he has written extensively on the Hellenic link to Anzac and worked to raise awareness of this link across two world wars in Australia and Greece. One of the major projects he has worked on is The Lemnos Gallipoli Memorial in Albert Park, unveiled in August 2015. He is now completing a major new commemorative book on Lemnos and Gallipoli, and assisting the above project to honor the memory of those Allied soldiers who suffered in the Nino Bixio and Sebastiano Venier tragedies off Pylos and Methoni.