Her love for the Greek language, in conjunction with her scientific knowledge and her relocation to Greece in 1995, led Hester Hoette to create a holistic online program to assist those wanting to develop their Greek language skills.

Born in the Netherlands, Hester studied developmental psychology at the University of Amsterdam (UvA) where she specialised in cognitive meta-linguistic processes relating to reading, spelling and learning difficulties.

It was after moving to Greece permanently in 1998 that she established a learning centre for children with reading and spelling difficulties. She also went on to conduct psycho-linguistic-based research, focusing on cognitive meta-linguistic processes involved in learning to read, write and spell, which has all come together in the web application Lexilogia.

Developed with the help of designer Joes Koppers, Lexilogia consists of playful interface interactions which are easily accessible online.

The program aims to raise awareness of the phonological and morphological aspects of words. Hester says she chose to take this approach as all psycho-linguistic-based research focusing on cognitive meta-linguistic processes involved in learning to read, write and spell shows that having this knowledge and awareness is the basic requirement for acquisition of a language.

This applies to monolinguals, and even more so to bilinguals.

The fact that the program is available online is very important for the Greek diaspora, making it accessible to those around the globe who will get the most benefit.

While there is a lot of benefit to learning a language such as Greek, Hester recognises that there are factors that deter people from pursuing Greek language lessons.

“The long history of the Greek language and traditions alone are important reasons to make the effort to keep Greek alive in the diaspora. But maybe these more emotional reasons are sometimes not enough for parents and children to engage in Greek lessons,” says Hester.

She points out that the growing necessity to learn foreign languages deemed ‘professionally more useful’ than Greek could force many Greek bilingual children to spend less time on their Greek.

But what people don’t realise, says Hester, is that knowledge of the Greek language can have many linguistic benefits when learning other languages in future.

“Greek bilinguals are bilinguals in a special position! They have the advantage of access to such a phonological and morphological transparent language,” she says. 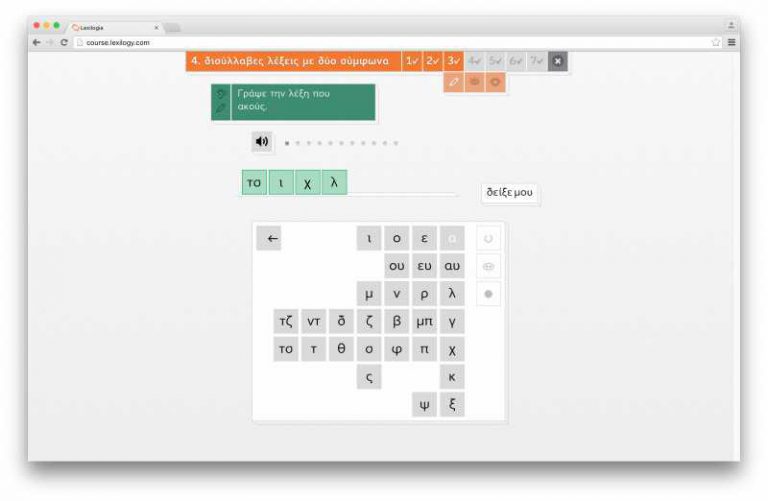 “This means they have access to a language that on its own provides an easy entrance to the knowledge of word structure. As this knowledge is so easily transferrable to other languages, the understanding of the Greek word through Lexilogia will not only help them obtain proficiency in reading and spelling in Greek, but also make them better readers and spellers in other alphabetic languages. Obtaining a rich vocabulary in first or second languages is also easier for those who recognise a stem and understand the structure of a word,” she explains.

Currently up and running, anyone who is interested can visit the Lexilogia website and purchase the program.

In the meantime, the team will be undertaking a research project in cooperation with the Universities of Amsterdam and York at a number of Greek schools across Melbourne this coming school year.

“Through the research we intend to get a clear view on how Lexilogia can be integrated in the teaching program in the classroom. Lexilogia will be used by children in primary school on a group level, and teachers will follow the process through a teacher administration account online. Children will be able to do the lessons at school or at home through their personal login,” Hester informs us.

So far the response from those participating in the program has been overwhelmingly positive, which Hester attributes to a growing demand for innovative approaches to language learning.

By taking the traditional teaching model and combining it with engaging new technology, she says students will be able to get the most out of their studies.
For this reason the team recently got in touch with the Modern Greek Teacher’s Association of Melbourne, with an aim to join forces.

“There is a search for innovation and an openness for new approaches that meets the requirements of our modern time. We are more than happy to complement their efforts and work together.”