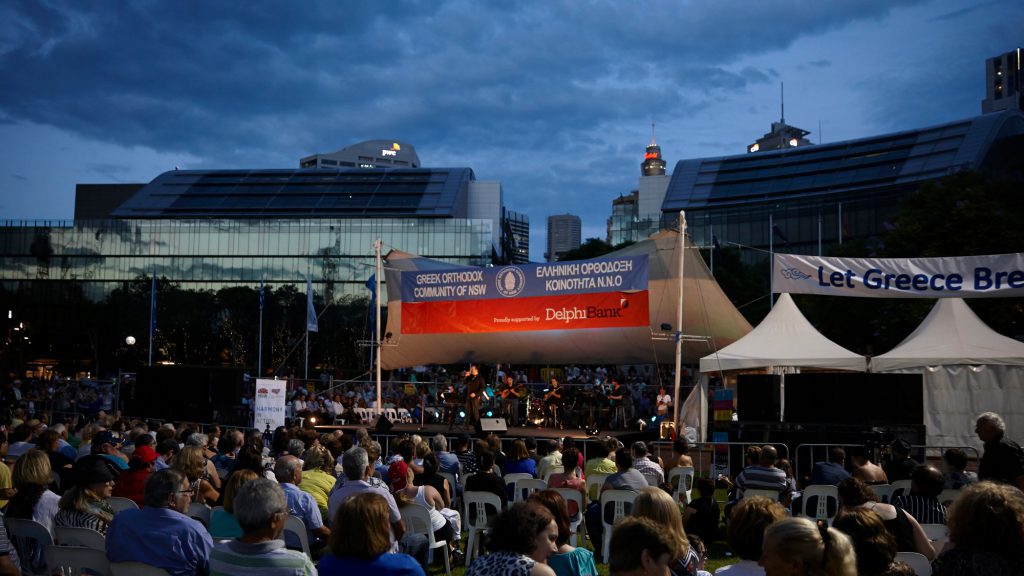 From superstar Alkinoos Ioannides to Dimitris Basis, the 34th Greek Festival of Sydney will inspire, amaze and entertain. Starting with Greek Fest at Darling Harbour, clear the diaries for another wonderful season of Greek culture.

Taking over the Darling Harbour Precinct on 27 and 28 February, the much-anticipated event is guaranteed to please. Last year almost 80,000 people attended the Fest, and not all of them were Greek! With free entertainment across two stages, delicious Greek street food, a pop-up bar, mandolato (Greek nougat) cooking demonstration, traditional performances and much more to delight the Greek as well as the broader community.
The festival hosts an international performer each year for a free concert in the evening to close the Fest at Tumbalong Park. Artists who have performed previously include Eleftheria Arvanitaki, Haris Alexiou, Glykeria, Dimitra Galani, Alkistis Protopsaltis and Mihalis Hatzigiannis. From the 1993 album ‘Stin Agora Tou Kosmou’ to his 2014 offering ‘Mikri Valitsa’, Ioannides has developed a repertoire that combines electric music with chamber orchestras and rock bands with choirs, all deriving from his Greek and Middle Eastern influences. He will be joined on stage by Yiorgos Kaloudis (cello and Cretan lyra), Dimitrios Chatzizisis (violin), Dimitris Tsekouras (double bass) and Manolis Pappos (bouzouki), delivering a soul-moving program appealing to many musical tastes.

“I’m honoured to be invited to perform at this huge Greek festival and can’t wait to get back to Australia, although it will be my first time visiting Sydney. It’s heartening to see how popular Greek culture is in a country more than 8,000 miles from Europe; the Greek Community should be proud of its role in this achievement,” said Ioannides.

Chair of the Greek Festival of Sydney Nia Karteris told Neos Kosmos, “we are delighted to have for the very first time in Sydney this unique performer with a unique voice. The festival continues to push the boundaries, showcasing the highest calibre of Greek cultural music.”

The Greek Festival of Sydney is a Greek Orthodox Community of New South Wales event and one that is eagerly anticipated on the cultural calendar.
As we start to nudge the four decade mark of the festival, I asked Nia what the festival means to the Community. She told me that it’s the “ability to promote our heritage, culture and language, not only over the course of 34 years, but also over the last 118 years since the establishment of the Greek Community”. She made it clear how proud she is that every generation has a different interpretation of Greek culture. She also told me of her disappointment with the “lack of acknowledgement by the NSW government in relation to funding for such a significant cultural festival”. Indeed, this is a hurdle that the state as well as federal government should address to ensure the growth of cultural events in NSW in the long term. Harry Danalis, president of the Greek Orthodox Community of NSW, is another excitedly looking forward to the start of the Greek Festival of Sydney. “The festival is a great way to embrace and showcase the strength of our culture, and this program will again demonstrate how strong we are.”

What makes the festival different to most multicultural festivals is the seven-week cultural program which follows Greek Fest.

A true highlight of the festival will be Gioconda’s Smile – Music of Hadjidakis and Xarhakos on Friday 15 April. Manos Hadjidakis and Stavros Xarhakos are two of the most inspiring and significant composers the Greek world has produced, indicative of the strength of Greek creativity.

The concert is presented by the festival and the prestigious City Recital Hall. It will be conducted by maestro George Ellis, featuring his own orchestral arrangements. George is of course no stranger to musical brilliance and creativity, from his role at the Sydney and Athens Olympic Games opening ceremonies to collaboration with Aussie bands such as The Church.

Celebrated vocalist Dimitris Basis will return to Sydney and he will be joined by local Greek Australian musicians performing with a symphony orchestra.

The concert will open with Hadjidakis’ famous orchestral suite, Gioconda’s Smile, a masterpiece of orchestral composition. George Ellis told NK that “combining symphonic orchestral instruments with Greek traditional bouzouki, the piece is a wash of sonic delight. It tells the story of a Greek woman strolling through the streets of New York and being fascinated by all the new sights and sounds”.
The second half of the concert will feature the work of Xarhakos.

Other events to look for

With around 30 events to keep the public engaged, one can be distracted by the impressive list of activities.

Mermaid’s Melodies is one that will be unique and worth attending, coordinated by Dr Alfred Vincent, formerly of the University of Sydney, who has worked tirelessly to bring together a choir that will represent Arabic, Greek, Spanish and indeed the Mediterranean region. The event, to be held at the Holroyd Centre in Merrylands, a heartland of multiculturalism, is sure to be a sell-out on Sunday 3 April.

On March 22 Dr Alanna Nobbs from Macquarie University and one of the most prominent academics of history in Australia will present a lecture on ‘Byzantium and its Greek Heritage’ at NSW Parliament House.

Add to the mix exhibitions, literary and academic talks, cultural performances, comedy (George Kapiniaris in Finding Memo), theatre and much more. The 2016 program will deliver another wonderful chapter for our local Greek culture.

The support of the Greek public, volunteers and some passionate sponsors, including Delphi Bank and Emirates, will ensure a wonderful few weeks ahead.

The full program is available from www.greekfestivalofsydney.com.au

Tickets for Giaconda’s Smile are now on sale. More information on the festival at info@greekfestivalofsydney.com.au

* Billy Cotsis is the author of The Many Faces of Hellenic Culture.