Finding the next Antetokounmpo 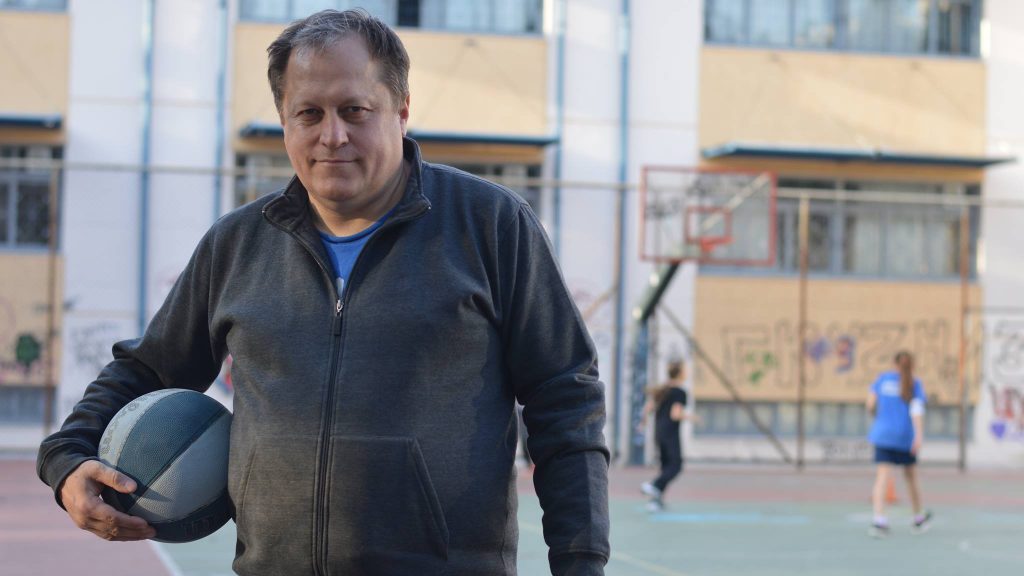 It’s a sunny February afternoon on an outdoor basketball court in central Athens, where coach Spiros Vellianitis is scouting for the next Giannis Antetokounmpo.

As he watches over his young athletes running drills, coach Spiros reminisces about the time he stumbled on Thanasis Antetokounmpo, the older brother of NBA star Giannis, an event that was to change the lives of the Antetokounmpo family forever.

“I saw Thanasis walking on the street and immediately recognised he had the physical attributes to play basketball. Not only was he athletic, he was also street smart.”

Coach Spiros tailed Thanasis for two years, until finally he approached the Antetokounmpo brothers to convince them to try out for a neighbourhood basketball club.

Born in Athens to Nigerian parents, the Antetokounmpos had a tough childhood. Thanasis, then 15, and his younger brother Giannis, were expected to find work after school, not sit around playing games. Convincing them and their parents to play basketball, a sport none of them had played before, took some effort.

But such was the belief coach Spiros had in their talent that he refused to give up.

He talked a club in Zografou into signing the players, then helped the family find an apartment nearby and even offered them cash to help make ends meet.

“He was giving us money – the guy didn’t have money. He was borrowing money to give to us. He loved us too much. I cannot say where the love comes from. I didn’t even know that guy,” Giannis told reporters.

Now playing in the NBA for the Milwaukee Bucks, the player known as The Greek Freak is well on his way to superstardom. He says he owes a lot of that to the help he received from coach Spiros.

“Spiros is a great guy, a very great guy, like a second father for me. I believe without Spiros, I would not be here.”

While Giannis is making headlines in the NBA and winning praise from the likes of Kobe Bryant, his three brothers are also chasing the dream of playing in the world’s leading basketball league.

Coach Spiros has no doubt they will make it, and believes it won’t be long before we have all four brothers playing NBA basketball, while we could see the other three joining Giannis in the Greek national team.

He also thinks there are more children playing ball in Athens who could go on to play the sport professionally. Which is why he set up a basketball club for boys and girls in Kipseli, a central Athens neighbourhood with the biggest population of migrants in the city.

“Greek kids usually go to bigger clubs which are more expensive and require more discipline. A lot of the immigrant kids are afraid to join such clubs or simply can’t afford it, so we decided to set up this club to give them the opportunity to play the sport,” says coach Spiros.

“Last year we competed in the national championship for the first time; our boys did well and our girls performed brilliantly,” boasts coach Spiros.

He says the aim is to introduce more teams but the club is finding it tough due to a lack of funding and resources, which means the team trains on outdoor courts, even in the winter, while players often have to carry team equipment from the club base in Kipseli to the stadium where they play their games in Kato Patissia, four kilometres away.

“It’s something I doubt any other team in Greece or anywhere has to do, and it is a must-see event to witness our girls carrying the equipment as they walk the four kilometre journey to the stadium.”

“Our president Giannis Thomopoulos is funding this project as much as he can but we certainly need help. It’s a project I believe in, a project that not only helps these children to assimilate better into Greek society, but also one that will bear fruit, because from these talented young athletes we might find another Giannis Antetokounmpo.”

While discovering new talent is important, watching coach Spiros with his athletes you realise it’s not fame or fortune that drives him. This is a man who just wants to see young children given a better chance at succeeding at life, and he believes sport can help achieve that.