George Xylouris: “We have created something that is at the same time ancient and new”

Coming from musical royalty, the Cretan lutenist has embarked on a new venture, along with the acclaimed Australian post-rock drummer, Jim White 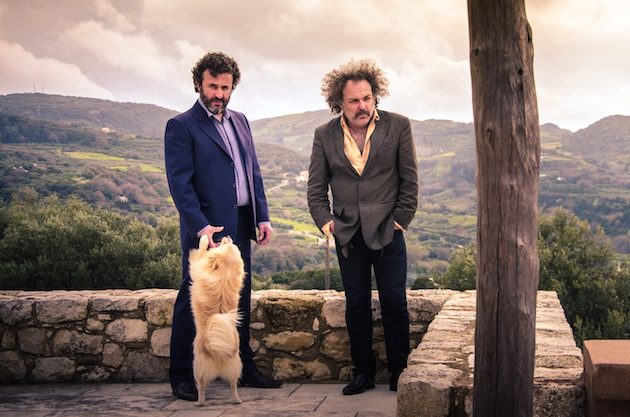 It has been one of the least expected and much praised collaborations of recent years: Jim White, the adventurous post-rock drummer known for his work with Nick Cave and the Dirty Three and George Xylouris, the lute player coming from Cretan music royalty.

Their album, ‘Goats’, a collection of adventurous instrumentals, that blend Cretan tradition with rock, has been received with great acclaim in the alternative rock circles and the unlikely duet has been touring Europe and the United States with great success.

Now, they’re back in Australia and tonight they play at the Caravan Music Club, in Oakleigh.

“I am very fortunate and grateful to be playing with a musician of his caliber,” says George Xylouris of Jim White.

“Working with him has broadened my musical horizon. Jim and I have been friends for more than 25 years, from the time that I first set foot in Australia,” says the lutenist, who has lived in Melbourne for eight years.

“He would often come to our concerts with Xylouris Ensemble; this is how we first played together – I have even played with Dirty Three, at their beginnings,” he says.

“We have been in touch ever since, sharing music and we have discussed about doing an album together, but we’ve only managed to the studio three years ago, when he came to visit us in Crete.”

After these first initial sessions, another recording session took place in New York, where Jim White is based, when George was on tour there.

After the success of “Goats”, the duet is set to release a second album in October.

“It has been a very special experience for me, working in different countries and blending different kinds of music,” says George.

“Although I was brought up with the Cretan musical tradition, I have always been open to different influences, from traditional kinds of music from around the world.

I even see rock as a kind of music that bears its own tradition, as it is rooted in the blues.

Crete has already been a melting pot of culture, being at the crossroads of many civilisations. We have been equally influenced by the West and East, from the Italians, from Asia Minor and we have musical styles that evoke the byzantine or the ancient era,” he explains.

As for Xylouris White, “We have created something that is at the same time ancient and new.”

AN AMBASSADOR OF GREEK CULTURE

Playing in festivals all over the world, George Xylouris is in the privileged position to get in touch with people who do not normally listen to Greek music and who see him as an ambassador of Greek culture. “I am flattered “, he says, admitting that this is a feeling that he gets when he plays abroad.

“When I play, I like to think of my ancestors and the elders in my village, people in their 80s and 90s who treated us as equals. They were channelling an ancient spirit, that they had kept alive through adversity, poverty, war and hardships. This is the spirit that I would like to transmit to people, through my music.”

This urge has been especially pressing lately, given the situation that Greece has been dealing with, swept by the economic crisis and the refugee crisis.

“I feel the urge to go out and help those who assist the refugees, do whatever I can, as a musician and a citizen,” he says.

“I feel betrayed, as do a lot of people. The Greek people have received a slap in the face. We vote for one thing, only to get something different.

People have lost hope and trust in the system,” he explains. “But I want to be optimistic, to believe that, through music we can keep standing till we see what will happen in the end.

Weneed encouragement and arts have always provided us with lifelines.”

Xylouris White will be playing at the National Gallery of Victoria tonight at at the Caravan Music Club in Oakleigh tomorrow, Saturday 12 March.

On the 17 and 18 March, they will be at the Corner Hotel, supporting Violent Femmes.