Anyone who has formed a rock band with the prospect of success knows how difficult it is to break into the industry. Add Greek-Australian to the equation, rewind back 15 years and the complications get even messier. Greek duo King George, who are about to launching their debut album share their story. 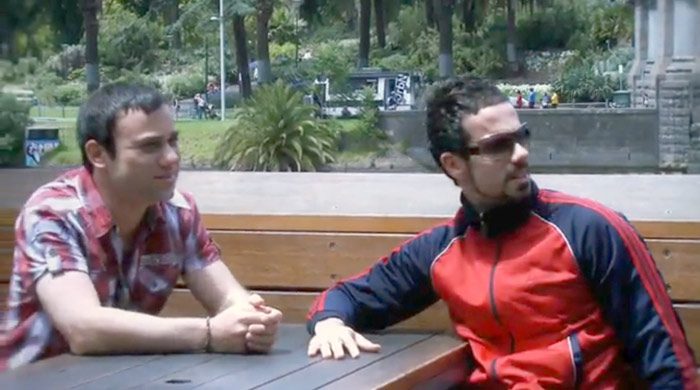 It was an era of boy bands, so you would have thought forming an all boy rock band in the 90s would have worked in their favour; but not for two Greek boys from Oakleigh.

Long before King George, George Zois and Michael Makris met at Oakleigh Secondary College and formed the school’s first rock band. There were no music classes back then, and so the boys had no choice but to practice during their lunch breaks, secluded in a hall upstairs.

“All the young Greek guys were playing traditional Greek music so to be playing rock music-we were seen as rebels,” says Zois, who is currently the vocalist and song-writer of King George.

“With the Greek psyche and mentality back then, you’re not supposed to join a rock band- you’re supposed to finish school and go to university.”

The boys struck a compromise with their parents by completing their university studies whilst continuing to play as part of a four piece band, June 13.-

Breaking away from the conventional Greek music scene was not without its challenges.

Whilst their Greek-band counterparts were admired for their dark European looks, Zois and Makris were told by their record label that they looked too ethnic.

“We were told to change our image, dye our hair and change the way we dress,” reminisces Zois.

“That’s the problem with Australian mainstream music and you see it in the film business too- those at the core of it are all very Anglo-Saxon.”

Though not left with a bitter taste in their mouths, the boys chose to record their new album, without corporate support.

Since splitting from June 13 back in 2003, Zois and Makris renamed themselves as King George.

Zois is the songwriter, vocalist and guitarist, whilst Makris plays the drums and back-up vocals.

With major influences including U2, Faith No More and The Killers, Zois describes his debut album, Prisoners of the Pluto Junction as a unique mix of light and dark rock music. There are emotive melodies, powerful rhythms, and even a slight Greek influence.

“Greek music, particularly the older music can be very dark so I think that as a song writer some of that has come out. I also play bouzouki, which I have incorporated in one of the songs, Dancing in the Western World,” adds Zois.

King George have previously released a single, Nothing Left, which has been played by several radio stations including Triple M, and shown on Rage in Australia and New Zealand.

The band has slowly been building its fan base, whilst playing at select shows such as a support act for Hoodoo Gurus and Grinspoon.

King George will launch their album on April 22, 8.30pm at the East Brunswick Club, 280 Lygon St.