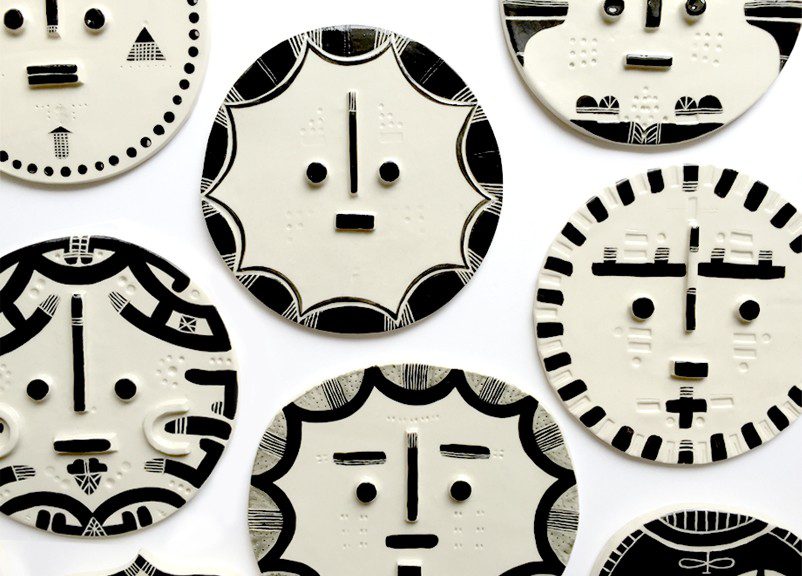 Louise Kyriakou’s inherent ability in art and love for painting made a career path in the field seem like a natural direction early on.

Louise pursued illustration and graphic design with much success, however, it was only when she started working as a secondary school art teacher in 2013 that she discovered her true passion – ceramics.

As an educator, she was excited to once again use long-forgotten skills and bring these together with the style and imagery she had been exploring and developing in her paintings, but to incorporate these visual qualities into a different art form was quite a challenge.

Into this challenge she interlocked her love for faces and the symbolism of emotions through a unique minimalist expression while experimenting with clay.

“I have a love for human faces and am fascinated by the billions of combinations there are out there in this world,” she explains.
“I also love how we are so used to reading faces that we are able to recognise them in inanimate objects, such as cars, houses, doorknobs, and so many other things around us in our daily lives.”

Louise is interested in the way the common elements of a face can be manipulated but still be recognisable, or how a small shift in placement of features can change the expression of a character, and in turn, our emotional response to it. She started making her signature ceramic faces back in 2014 and since then demand has been steadily increasing.

“I find it an enjoyable process to build different characters and I just let myself have fun with it, which I think comes through in the final products. I also never plan any designs before I start so that I’m able to allow the character to ‘speak’ to me as to what direction I take it in terms of its decorative treatment. In my work I’m not trying to make a range of animated characters. To me they are more of a celebration of both the common traits and the diversity of the population.”

Playing with several art disciplines, she creates various characters adding a twist to inanimate objects using nothing but clean lines. Louise acknowledges that her background and training in graphic art has a strong presence in her work.

“My first post-high school studies were in design and this definitely left a deep impression on me which still comes through in my work today,” she says.
“I use geometric lines in the way I build my designs, and also as a structure for symbols built within the imagery.”

These formal qualities can be seen in the use of clean geometric shapes, and particularly in various ways the artist uses the line. The line work is the primary decorative feature in the ceramic faces, and is created through a technique known as sgraffito, where clay is painted and then scratched away to reveal the clay underneath.

“It’s such an effective way to create intricate detail and I like it because it also feels like I’m illustrating my characters with each line I draw,” she adds.
“In this process I’m not deliberately trying to convey different emotions but it is interesting to see how they develop, as I’ve noticed that the pieces I’ve made that have a heavier use of line and pattern tend to look more intense and angry.”

In her faces, we see everyday heroes, protagonists of a sterile and simple yet surrealistic and fun world. A lot of her interest in design and modern art can be seen in her work, especially with the use of geometric shapes and patterns oftentimes juxtaposed with historic or cultural elements.

Even though her art is distinctive, she does not want to categorise it, but she has never stopped to consider how others perceive her work.

“I think as long as you don’t feel constrained by existing notions of where others think your art fits then you are able to be free to create without boundaries.
“After the work’s created it’s up to others to muse over your intentions and perhaps define and label your work,” she tells Neos Kosmos.

With roots reaching as far as Kastellorizo, Ithaca and Cyprus, Louise has always loved learning about ancient Greeks’ art and culture and especially admired the decorative pots illustrated with narratives of the mythological tales. The use of patterns and symbols that embellish the objects from several ancient Greek periods are some of the imagery she will revisit in a re-imagined and stylised way.

“Being from a culture that is so rich in artistic history is a special thing to remember and to be proud of,” she stresses, while sharing her grandparents’ stories.
“They all came to Australia in the late 1920s looking to start a better life here. They met and married here in Melbourne and lived a fairly typical migrant life.

Like many other Greek Australians I had family who had a fish and chip shop, and greengrocers, but other than that, my parents embraced Australian culture, but the Greek traditions were still very much alive and present, especially when we all got together as a family.”

Louise references an array of cultural iconic design styles through her unique motifs combining Australia’s multicultural character and her ethnic influences, altogether diversifying her artistic expression. Aside from making work for her main suppliers – Modern Times in Fitzroy and Fenton and Fenton in Prahran – she is currently working on a solo show to take place at Outré Gallery in Melbourne at the end of June.

“They have a gallery space called The Small Wall Project, and I’m in the process of making lots of ceramic faces as well as a handful of other art pieces for this show,” she says.
“I’m really excited to have this opportunity to show at such a great space in the heart of Melbourne. This exhibition is giving me the opportunity to explore my ideas to a fuller extent and be more experimental in my approach, which I’m loving.”

Find out more about Louise at www.instagram.com/louiseeky