Alexis Lada’s compelling story of love and adventure aboard a Greek Raiding Schooner in World War II is a great yarn, but much more, says Mike Sweet. 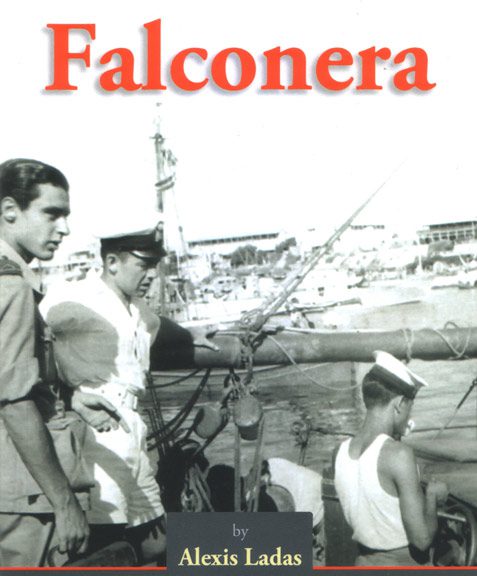 The remote, uninhabited island of Falconera half-way between Athens and Crete is the focus of daring exploits in the last months of World War II. If the German munitions convoy succeeds in reinforcing Hitler’s army on Crete, the occupation will continue, prolonging the war.

The British Navy can stop the fleet only if they can locate it. That task is given to a customised caique and her brave crew, one of the ships of the Greek Schooner Raiding Flotilla.

The story is fiction but the setting is real. The author, Alexis Ladas, was a 24 year-old captain of a Greek Raiding Schooner in World War II. The little known Schooner Raiding Flotilla; its bases in Alexandria, Egypt and Deremen, Turkey; its only slightly disguised commander; and the feelings of the book’s hero in war, were very real indeed.

The author wrote what he lived. In the foreword, Patrick Leigh Fermor paints a picture of the extraordinary times Lada and his fellow mariners witnessed, fighting the German occupation in the Aegean.

“Wild parties and love affairs in Alexandria, Cairo and Beirut – the bright intervals of dark undercover warfare and island resistance – the setting for a strange and marvelous collection of figures…the dazzling Greek contingent; a tall, charming, sophisticated, highly literate, romantic-looking and very amusing silhouette leaps to mind. A narrative of great vividness, fraught with tension and drama in an atmosphere – for anyone who was afloat in those waters at the time – that is completely authentic.”

Fermor’s validation of Falconera is proof, if proof were needed, of the writer’s inside knowledge, and testimony to Lada’s gifts as scribe in translating the romance, chivalry and courage of the real men and women who lived the story.

Falconera is the latest labour of love from Athens’ Lyabbettus Press, a small publisher whose own story began in 1968, when Philadelphia born, and now honorary Athenian, John Chapple, edited and published his first title.

John worked closely with the author on the manuscript until Alexis Lada’s death in 2000.

At the book’s launch in Athens last week, Chapple shared the story Lada had told him, of the manuscript being previously rejected by a British publisher, on the grounds that the publisher could not believe junior Greek naval officers would have been able to communicate in fluent English. How Falconera dispels the myth of that kind of blinkered cultural pre-conception, and reveals in its fiction, truth and authenticity, is one of the book’s great strengths.

At the heart of the Lycabettus Press mission, is to work with writers (inside and outside Greece) to present new stories about Greece’s history and politics. ‘There’s no verb ‘to edit’ in Greek’ says Chapple. ‘That’s part of our mission. Our titles are always produced as a cooperative editorial undertaking with the author.’

Falconera certainly benefits from this, and the pleasure Chapple takes, in ‘clear declarative sentences’; its writing style is hugely readable.

Falconera is a gripping romance and a suspense-filled tale of action. It is also a fount of information about the Aegean and Greek sailing lore.

This is an enthralling story, beautifully told, that reveals a rich and little known chapter in the story of Greek resistance in WWII.

The protagonists, their actions and feelings come alive on the page; betraying the author’s remarkable experiences as a captain with the Flotilla.

The characters are exquisitely drawn; their dialogue so obviously faithful to the courageous sailors the author knew so intimately.

This is an important book and a belter of a story. If you’re looking for a category to put Falconera in, I’d suggest ‘un-put-down-able’.