Truth is, there aren’t many people of Greek heritage in car racing, let alone high-profile drivers.

Porsche racer Aaron Zerefos, a US-based Greek Australian, is leading the handful of Greek names in the sport.

“It’s good to get out there and have a lot of Greek racing fans cheering for you.

“I’ve had a few good results lately and hopefully things will go well this weekend as well,” he tells Neos Kosmos.

After a long time away from home, he is returning to the Porsche Rennsport Festival at Sydney Motorsport Park.

Zerefos will compete in the Porsche Sports Car category, racing the #23 GT3 Cup Car, a car which has been driven and signed by Australian F1 star and current Porsche World Endurance Championship factory driver Mark Webber.

“How can you say no to such an invitation? Rennsport is a very exciting opportunity,” he laughs. “First, I’d get to be back in the country and second, I would be driving a car that Mark Webber has driven.”

Porsche Rennsport, which means ‘Porsche Racing’, is a festival bringing together an extraordinary gathering of significant Porsche race cars from the past and present, as well as a collection of those who have designed, engineered and driven them to victory in the world’s most famous sports car races. The race is held every three years at iconic racing venues around the world.

“I competed at Rennsport a few years ago and had success, so I’m hoping for some more this year in the Porsche Sports Car races,” Zerefos says.
“It’s good to race against such high-profile drivers but all I can do is prepare myself the best I can and worry about my own race, be focused behind the wheel.” 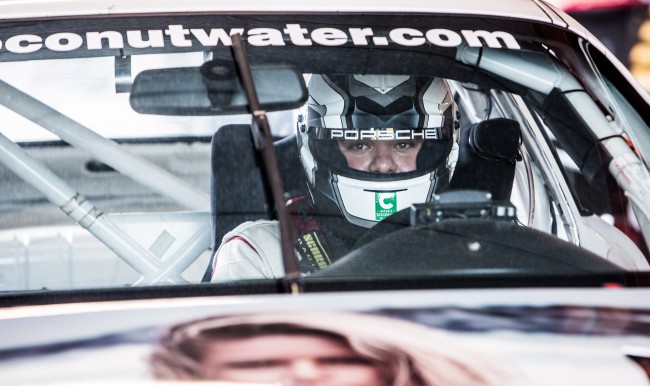 Racing had always been a passion for 32-year-old Zerefos, who started driving at a very young age of seven. He grew up on a rural property and even had a little motorbike to ride back then.

“I started taking it more professionally when I turned 17 but got into the sport after I got my cams licence about 12 years ago,” he says.

“It’s my sixth year driving for Porsche. It’s something I’ve always wanted to do and a hard sport to get into. It is amazing what you can do if you have a dream, isn’t it?”

“It’s been a busy start to the year, trying to keep up with my regular business activities and racing commitments. I have been on the move since Christmas,” he explains.

“I was at the F1 Grand Prix in Melbourne, then I returned to the US for the Long Beach Grand Prix and Formula E, and spent some time in New Zealand, so it’s always nice coming back to Australia to race and catch up with fans and sponsors. I’ve done the Bathurst 12 Hour earlier in the year and I came second.”

The Liqui-Moly Bathurst 12 Hour is an international endurance race, for performance and production cars, at the spiritual home of Australian motor sport.
Zerefos will again compete in selected races at Rennsport Australia and GT3 Cup Challenge. 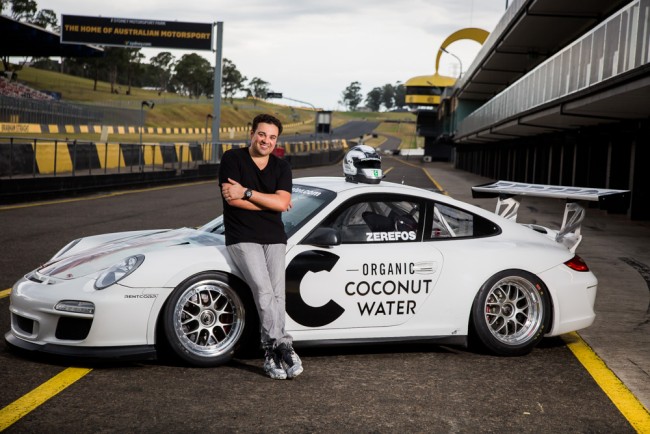 The Greek Australian has some really good opportunities on the table in 2016, including a round of the Porsche Supercup at Monaco. His good result in the 12 Hour has put him on the favourites list.

“It’s never an easy race but sometimes the cards can fall your way,” he muses. “At my end I try to keep as fit as possible and focus on the job at hand rather than think of other things when I’m racing.

Racing can be a very demanding job, which apart from the physical risk involves a lot of training and travelling. Zerefos, who is also a successful entrepreneur, is involved in a lot of off-track activities, from generating sponsors to promoting racing events.

“Racing these days, and sport in general, entails so many parameters, like developing a good relationship with your mechanics, your entire team. It’s not just a one-man-show sport,” he emphasises.

“The driver is still the most important part though, therefore you constantly need to develop your skills and be fully aware of what you are doing in order to have control over yourself and the car,” he explains.

The high-profile driver acknowledges and respects the dangers, however, he admits one of the reasons he does not get nervous behind the wheel is the support he receives from his fans.

“I am not married and I don’t have a family of my own, so not many people have to worry about me,” he admits.

“On the other hand, my fans are like my family and I would like to thank them all for their support, especially the Greek community. It really means a lot. It keeps me going.”