Three Greek-Australian mums share the joy and hardships of motherhood with Neos Kosmos. 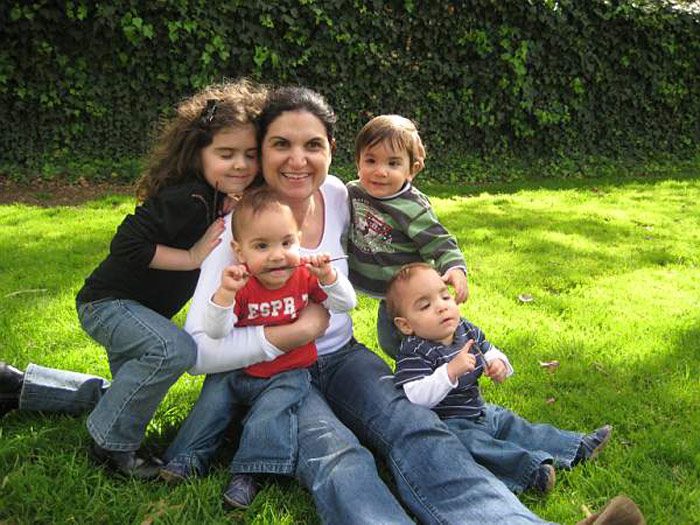 Coni Laranjeira with her children, Georgia, and the triplets Manuel, Orlando and Sebastien.

“It is very overwhelming at times as you can suspect, bringing up three little ones all at once but their personalities, and the love you have for them brings many rewarding times that far outweigh the craziness and insanity” Coni Laranjeira

“We can be a bit of a side show when we go out in public.”

Eager to see the first glimpse of her second child, she looked up at the ultrasound and gasped in surprise.

“The 11 and a half week ultrasound showed not one but three babies!” she reminisces.

The triplets, Manoel, Orlando, and Sebastien were naturally conceived in 2007, which with sister Georgia, then 3.5 years, brought the Laranjeira gang to a total of four children.

Trying to feed, and care for three babies all at once was not without its challenges for the Adelaide couple.

Suddenly the car was not big enough, and neither was the house, which is why the Laranjeira’s decided to renovate. Then came contemplating the costs of education.

“It is very overwhelming at times as you can suspect, bringing up three little ones all at once but their personalities, and the love you have for them brings many rewarding times that far outweigh the craziness and insanity,” she says.

Laranjeira says she is slowly learning to adjust to the unwanted attention from the public.

“My clan isn’t something that one would look at and just let go,” she says.

“I was at the zoo recently with my children and a woman physically stopped me and said, wow are they triplets? I wanted to move on but she kept asking me questions. I felt like saying turn around there are lions behind you, we have only children!”

Laranjeira is truly a super mum. She has managed to sustain a part-time job as a voice-over artist in addition to her role as a stay-at-home mum with the boys, now 2.5 years.

Of Mother’s Day, Laranjeira says, “One of my sons is an early riser so I suspect I will be up at 5am! The kids always make the day extra special by writing cards, even the boys. No doubt it will be an amazing day.”

“Even though I’m divorced, I’m still able to provide that same love that I grew up with.”

Whilst most of her friends were partying and having fun, Papakirikou was a married woman, stuck at home changing nappies.

“Being a parent young was hard but I wouldn’t change that in a heartbeat,” she says.

“It’s inspired me to be the best person that I can be at all levels.”

Enduring a divorce has been challenging for Papakirikou, although it has not stood in the way of a loving and caring relationship with her children.

“I take life as it comes- having a family you provide for them, you grow with them and you share with them, and I guess I have tried to mimic what my parents were able to provide me with.”

Just as her parents planted a seed of travel in her, she has aimed to broaden her children’s perceptions of the world through family holidays to Greece, Egypt, Fiji, Italy, and Dubai.

Whilst she describes her relationship with her teenage son as the classic mother-son relationship, Papakirikou has taken it up a notch.

“I have to do the male stuff too, like show him how to kick a footy as well as stand up for himself,” she admits.

Papakirikou values every moment she spends with her teenage children and is looking forward to Mother’s Day.

“Time spent with them is invaluable and you can’t get it back, which is why it’s so important to achieve a balance between work, family and being a woman,” she says.
Hrisoula Luca,
mother of 2.

“It was hard not having my mother around.”

Hrisoula Luca is the proud mother of Kalypso, 4, and 11 month old Ariadne, who turns one the day before Mother’s Day.

“Kalypso loves to sing and dance and is learning how to read and write and Ariadne is speaking a few words- she calls her sister Pso,” she laughs.

“I work part-time as a personal assistant to a Member of Parliament, so I think it’s great to come home to friendly faces at the end of a hard day.”

Whilst she sees motherhood as rewarding, Luca admits that it was harder that what she had expected, particularly as her mother had passed away prior to the birth of her first child.

Luca plans to pass on the memories and traditions of her mother to her own children, beginning with Greek.

“I teach them Greek at home, and Kalypso goes to a kindergarten that has a mother tongue project that teaches Greek once a week,” says Luca.