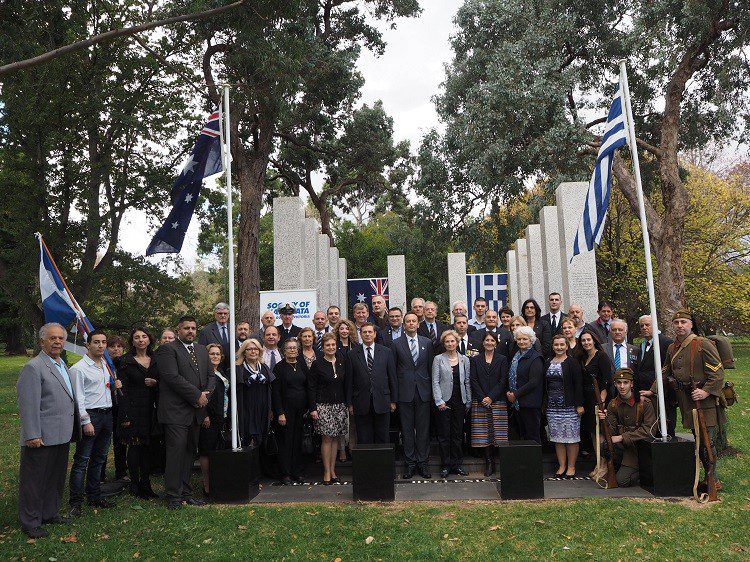 On Sunday 15 May more than 100 people gathered for a commemorative service to honour the Anzacs and other Allied soldiers who served and those who died defending Kalamata 75 years ago.

Held at the Australian Hellenic Memorial near Melbourne’s Shrine of Remembrance, and organised by the Kalamata Society and the Battle of Crete and the Greek Campaign Commemorative Council, the event was held in conjunction with the Battle of Kalamata commemoration on 24 May at the memorial erected on the waterfront at Kalamata. This was the first major commemoration of the battle ever held in Australia.

In late April 1941, thousands of Allied troops moved through Greece’s Peloponnese on their way to the embarkation beaches that had been established across the peninsula, from Navplion and Monemvasia to Kalamata. One of those to make his way across the Peloponnese in those desperate days was Australia’s Major Weary Dunlop, who drove medical supplies to Navplion and was eventually evacuated from there on 26 April.

Along the way, these troops fought desperate rearguard actions to delay and defeat the advancing German forces invading Greece. The campaign in the Peloponnese had begun with the defence of the Corinth Canal in April 1941, where Australian, New Zealand and British troops stopped German paratroops from capturing the bridge across the canal.

By 26 April, between 18,000 and 20,000 troops were assembled at Kalamata. These included Australia, New Zealand, British and Greek troops. Among the British troops were around 2,000 members of the Palestine and Cyprus Labour Corps. There were also some 2,000 Yugoslav soldiers and merchant seamen from sunken transport ships – all awaiting evacuation from the Kalamata waterfront. But sadly, not all of these could be evacuated, with the Allied naval evacuation force being under constant air attack, and many lost in the effort.

THE BATTLE OF KALAMATA
On the night of 26 April, some 8,650 Allied troops had been evacuated. By 28 April around 8,000 Allied troops remained in Kalamata waiting vainly for evacuation. At 6.00 pm about 200 German troops with artillery launched a fierce attack on the town.

Overrunning British troops defending the north of the town, the Germans seized part of the harbour and the Allied port-master.

They defeated the German forces, taking over 100 prisoners, killing 41 and wounding 60. The attack was led by New Zealand Sergeant Jack Hinton, who was awarded the Victoria Cross for his bravery during this engagement. Seventy Australian troops took part in the charge led by the 2/6th Battalion’s Captain Albert Gray, a former shop assistant from Red Cliffs. Gray was awarded the Military Cross for bravery. Both Hinton and Gray would eventually be captured.

More than 40,000 Allied troops were evacuated from Kalamata and other embarkation beaches across Greece, including thousands of Greek troops. Many of these troops would go on to defend Crete against the Allied invasion in May 1941. The vast majority of Greek forces defending Crete were regiments raised from the towns and villages of the Peloponnese.

One of those who embarked from the Peloponnese was Private Syd Grant of the 2/8th Battalion. He had served through the battles of Greece, including Vevi in Macedonia. Escaping from the Germans after being captured at Kalamata, Syd was eventually evacuated from the village of Trachila, south of Kalamata, after being helped by villagers for a number of days. He never forgot the support of the Greek people, and after the war named his Victorian soldier settlement farm Kalamata. Syd’s daughter, Catherine Bell, attended the commemorative service, along with her husband James.

Those who died in the battle of Kalamata and the other battles in the Peloponnese are buried and honoured in Athens’ Phaleron War Cemetery.

COMMEMORATIVE SERVICE
The commemorative service at the Hellenic Memorial included the laying of wreaths and a presentation on behalf of Greek war veterans.

Peter Andrinopoulos, MC and secretary of the Society of Kalamata, told the assembly that it was important that we all – as Australians and as Greeks – remember those who served in Greece in WWII, including those who took part in the defence of Kalamata 75 years ago.

Theo Kalyvas, president of the Society of Kalamata, recounted the bravery of Captain Gray and Sergeant Hinton and their men in that brave charge on the Kalamata waterfront that should never be forgotten. He particularly welcomed Catherine Bell, the daughter of Private Syd Grant, who had made a long journey to attend the service.

It was particularly gratifying to have in attendance a number of descendents of those Australians who fought in Greece in 1941, including Catherine Bell and Ms Rosemary Hart, the daughter of 16th Brigade Major Bell.

Peter Andrinopoulos announced that this ceremony would be held as an annual event.

For further information or to get involved in future commemorative activities honouring the service of the Anzacs in Greece in 1941, contact Peter Andrinopoulos on 0416 020 865 or Tony Tsourdalakis on 0419 856 736.