‘Mummy and Mumma get married’

Couple and authors of 'Mummy and Mumma Get Married', Roz Hopkins and Natalie Winter.

“Mummy and Mumma, why aren’t you married?” asks Phoebe.

“But what about you-know-who? We can’t have a wedding until they agree to come to the party,” Mumma says to Mummy, thus making a clear political statement on Australia’s current law, which prohibits same-sex marriage.

Although Phoebe doesn’t know who her mummies are referring to, she goes ahead and excitedly organises a surprise wedding for them with the help of her trusty sidekick, Biscuit the cat.

Phoebe’s mums finally get married in a ceremony joined by excited members of their extended families, as well as a priest, the queen and a judge.

Advocating that families come in all different shapes, sizes and make-up, the book is predominately aimed at families of lesbian couples.

Nevertheless, the two authors wish to reach out to a wider audience in an attempt to specifically address same-sex families and the difficulties they face at present within Australian society.

Hopkins admits that she decided to go ahead with the book in order to show to her young daughter that she comes from a structure “that was recognised and validated” in society. She says she found that the gap in the market, particularly compared with the US and the UK, “is a reflection of how behind the eight ball on the topic we are in Australia”.

Initially, the two authors found it hard to find a traditional publishing house that would ‘jump on board’ and manage the book’s distribution, therefore they turned to crowd funding, raising $7,500 in 30 days.

As part of the fundraising campaign, people were given the option to either buy a book for themselves to keep, donate one to a school library, or both.

Hopkins admits that some – principally religious schools – didn’t entertain the idea of the fundraiser or the concept of the book, therefore they passed on their donations.

At present, the pair is organising a book tour to secondary schools, equipped with 14 pages of teaching notes to go with it, and parents as well as educators are in two minds as to whether Mummy and Mumma Get Married should be allowed on the school library shelves or not.

“Including families is an important theme in the early childhood classroom,” says researcher Megan Beren, who conducted the scientific study ‘Gay and Lesbian Families in the Early Childhood Education’ (2013).
“Teachers, however, report feeling unprepared when a child’s family is composed of same-sex parents, while gay and lesbian families, in turn, feel invisible, silenced and excluded.”

Overall, the findings from Beren’s study confirmed that most teachers who participated in the survey wanted training on the topic of gay/lesbian families, but having books in their classroom was somewhat controversial. Some said they would like recommendations of picture books on the topic, while others felt uncomfortable with any books, unless approved by the school principal or administration.

In Australia, the Marriage Amendment Act 2004 Bill amended the outdated 1961 Marriage Act’s vague definition ‘marriage’ as ‘the union of man and a woman to the exclusion of all others, voluntarily entered into for life’.

Subsequent attempts have been made to change or reverse the same-sex marriage ban provided by the 2004 Act. In 2015, the Marriage Amendment (Marriage Equality) Bill attempted to define marriage as ‘a union of two people’.

This Bill did not proceed.

In August 2015, the focus moved from a parliamentary vote on the issue to a debate about the potential of a popular vote. An inquiry was called to investigate these mechanisms further.

It outlined the merits and drawbacks of a referendum, a plebiscite and a parliamentary vote, and set out the committee’s findings and views.

The committee made only one recommendation; the introduction of a Bill which would amend the definition of marriage in the Marriage Act 1961 and would allow for the marriage between two people regardless of their sex (Canberra, Senate Legal and Constitutional Affairs Committee, 2015).

Neos Kosmos raised this matter with members of our community and this is what some of them had to say.

Note: This is a non-scientific survey and reflects only the opinions of those who wished to participate (around 100 people were interviewed overall). 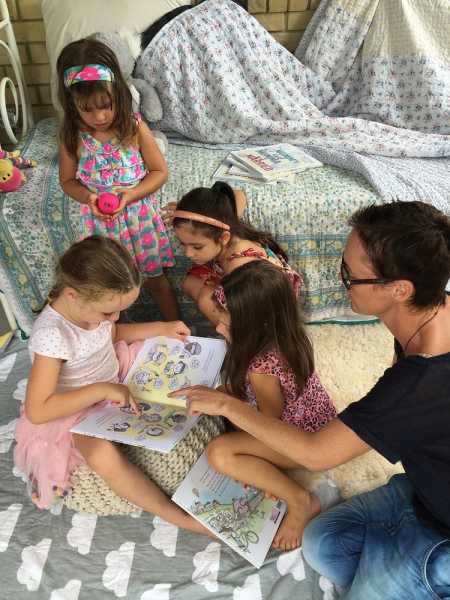 “I don’t have a problem with the book being published. I do believe in freedom of speech. I would not read it to my child. It’s written by biased people on the subject and has political lobbying behind it. I would like to approach the subject when it comes up with my child from my own angle based on my own opinions. I have no issue if it is available in bookstores or school libraries, I wouldn’t want it to be part of the curriculum though. Again, I want to protect the right to approach the subject with my own opinions. The best social education happens at home.” Athos, 43, father (2 children)

“These books are a great idea, but I think it is up to each parent to educate their own children about same-sex relationships.” Maria, 52, mother (1 child)

“I think the concept is great. At school, the government approved of a curriculum change that would teach children as young as year 3 about LGBT people in our society to prevent bullying. This book is very similar and I love the idea of presenting it to children as a storybook. Personally, I think that society is becoming more accepting of these issues, however, there are still people who are against homosexuality. I’ve grown up knowing that these people are no different to anybody else and I think that publishing a book like this will help Australia move forward on the issue of gay marriage.” Christina, 15, student

“I don’t believe we should ever allow a book like this to be in school libraries. Everyone is free to believe and do what they wish at home but that doesn’t mean that we should introduce concepts in children’s little heads that they have not even thought of at such a young age. I would not read it to my grandchildren as I don’t feel that it is necessary to be aware of this concept at such a young age. It’s not natural. Our religion doesn’t recognise it. Marriage should be between a man and a woman.” Eleni, 72, grandmother (5 grandchildren)

“I have no problem with homosexuality whatsoever. However I do not feel that anyone should educate my child on this topic of same-sex couple marriage or anyone’s child for that fact! In my opinion that is the parents’ job. When my child becomes of age and becomes aware of such topics, I’m more than happy to explain it to him when he is able to fully comprehend the topic. Until that time there is no reason for a book or teacher to teach mine or anyone’s child on the topic! I admit I briefly went through the book and it’s sweet and seems innocent enough. But as a parent and educated person the parent should be aware and be asked permission to have the book exposed to their child. Then the parent can either consent or not.” Katina, 30, mother (1 child), child educator

“I don’t think I would be reading it to my children given that the book is targeted to 5-10 year olds but appreciate other people’s decision if they chose to do so. Given one’s right to have freedom of speech I have no issue with it being in bookstores, there are much more provocative books available to the public.” Male, 39, single

“It is up to the parent as to when their child is ready to learn about same-sex relationships.” Pat, 25, single

“I would want my kids to be educated and accepting of gay marriage but I wouldn’t read it to my five-year-old cousins, for example, because they wouldn’t really understand. I think it’s a good idea for the book to be out there in the public but if the book was in schools it could start an uprising between the parents and the school, as some people still feel that gay marriage goes against their beliefs and religion.” Kristiana, 15, student

“The concept of the book appears to be one which tries to put across a point of view contrary to how my faith and I view the family unit. Because of this I wouldn’t read it to my children as I don’t think it would be beneficial for their development. I would prefer that such literature was not readily available to children in primary school libraries etc. My main concern is that this type of literature is not imposed on children.” Greek Orthodox priest, 39

“Given the world is changing and we are now a diverse population and have been for some time, I think it’s important for a book like this to find its way in our existing world and yes, I would definitely read to my niece and nephew. In addition, given we teach children about sex in schools anyway, it would be in poor taste if we did not educate them that same-sex relationships are equally important. So yes, I would agree to it being in bookstores and primary school libraries.” Vickie, 42, single, child psychologist

“I don’t have a problem with people’s sexual preference but I wouldn’t go out of my way to read that book to my children. It is a very complicated topic and may be damaging to young children who have no idea of such a topic or even about sexuality. As a parent I wouldn’t approve of such a book being available in a primary school library, because at that age, it might lead to confusion.” Maria, 45, mother (3 children)

“We should have had a book like this earlier. Yes I would read it to my nephews as I don’t have kids and I would feel proud that same-sex relationships are recognised for what they are, loving relationships and not just sexual acts.” male, 40, single

“I would not encourage the reading of the book or being made available in lower school libraries as young children should not have to be exposed to concepts and lifestyle choices that would be better handled in their teen years and adulthood once able to grasp their significance and make an informed decision.” Chris, 56, father (2 children)

“The same-sex marriage theme explored in the book is simply telling a story of some families today and we certainly don’t have a problem with that. It is important that young people learn that families can be different in some ways but very similar in other ways such as connection, caring, love, and nurture. All of these ideas are helpful in forming an understanding of what a family is like.” male, 26, lawyer, single

“At this young age, we would be encouraging students to think about what makes a family and to simply give examples of different ways families are created and through reading literature it would support this. I would not want to go into the idea that some people oppose same-sex marriage at this age. My kids agreed.” Leeanne, 50, (2 children), primary school educator