A jazz take on the odyssey of a Melbourne icon 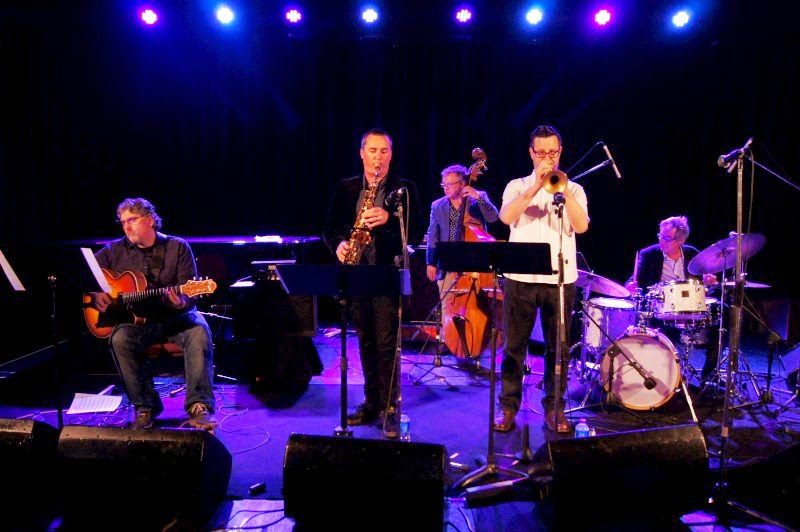 The Allan Browne Quintet (Eugene Ball on the trumpet).

Eugene Ball is one of the most acclaimed musicians in the jazz scene. He is also in an awkward position to speak on behalf of the late Allan Browne. A legend among the Melbourne jazz community, Browne was the quintessential jazzman, a larger-than-life personality, whose passing left a great void. A versatile drummer with a distinct storytelling style, he could narrate the history of jazz through his playing. And he loved poetry; he wrote beautiful poems and often used poetry as an inspiration. Such was the case with his last recording, Ithaca Bound, inspired – as its title suggests – by the archetypical work of literature, Homer’s The Odyssey.

“It is the story of a man overcoming obstacles to return home,” says Eugene Ball, who was the trumpeter in the Allan Browne Quintet. “It all happens to us in some way,” he adds.

It certainly happened to Allan Browne, who tackled serious health issues (undergoing a lung transplant) but always went back to playing with an array of different bands and individual musicians.

“It is really fitting that this was his last project,” says the trumpeter, noting that the album’s last piece is titled Peace at Last. “There is a kind of irony, or poetry, in that,” he says.

“He was an avid lover of poetry and literature and this was a pinnacle project for him, he was dreaming about it since he was really young. But I don’t think that he had somehow sensed that this would be his last. His attitude was always different, he was always looking forward to the future.”

A JAZZMAN’S LEGACY
Allan Browne passed away last year, shortly after Ithaca Bound was launched at the 2015 Melbourne International Jazz Festival. Now the festival has planned two tribute concerts, both to take place on Monday 6 June. One will be at Bennetts Lane Jazz Club, to commemorate Browne’s longtime Monday night residency that became a kind of Melbourne musical institution; the other will be a live performance of Ithaca Bound by the surviving members of the Allan Browne Quintet (Ball, guitarist Geoff Hughes, saxophonist Phil Noy and bassist Nick Haywood), featuring Lewis Humbert on the drums.

“It will be weird playing together without Al,” says Ball. “This gig is very important to us. It is an opportunity not to lament, but to celebrate Al’s memory.

He would have wanted us to keep playing. He was the glue that brought us together. We have been playing together for 15 years, exploring music and developing a relationship; that’s what music is all about,” he says, stating that the band was reluctant to let go of the large repertoire of music they built during this period.

“We thought about it and decided that the best way for us would be to keep going on a project-to-project basis.”

One thing they also all agreed upon was not to look for a replacement drummer. Instead, they’re set on inviting emerging young drummers to sit in, honouring Allan Browne’s legacy in the best way possible.

“He would always take young musicians under his wing and mentor them,” says Ball.

INSPIRED BY HOMER
The aim of this concert is not only to celebrate Allan Browne’s legacy, but also to present a magnificent work of art, a jazz meditation ‘on the journeys, adventures and spiritual life of Homer’s great Odysseus in his journey home to Ithaca’, as was stated on the album.

“We were all involved in this,” says Ball, explaining that, as a band leader, Browne left a lot of creative freedom to the other members so that they all contributed to the outcome.

“We all read The Odyssey and wrote pieces inspired by it,” he notes.

Asked to speak about his own contributions, the trumpeter explains how he was fascinated by the fact that, anywhere he went, Ulysses was met with an “overwhelming” kind of hospitality.

“They bathed them, they fed him,” says the trumpeter, who composed Memory and Kharis inspired by this.
“It was more than being polite; they were morally obliged to look after their fellow human. This is so beautiful.”

The trumpeter was also inspired by the chapter on the Lotus Eaters.

“It’s interesting to read a story about narcotics naturally existing in the world,” he says, before adding, with a laugh, “I love the idea of a whole community being permanently anesthetised, totally wasted.”

Does he think that there are modern connotations to this story?