It wasn’t long after this collaboration that Sofia and the Grammatakia arose, a new series of illustrated children’s books aspiring to introduce children to the Greek language and effortlessly acquaint with their heritage culture through fun characters and stories.

Written online in Greek, English and Greeklish, the books are designed to be read in Greek or in English (or both) by parents and educators with any or no fluency in the Greek language. The accompanying downloadable video also helps teachers practice their Greek pronunciation.

The books also include cute stickers with the key words from each book written in Greek. The stickers continue the lesson by bringing the characters into the real world, helping children to memorise the words.

“Kids love to dive deep into imaginary universes with cute, relatable characters and fun stories,” the author tells Neos Kosmos, explaining that the Greek “universe of thought” his father taught him is one where everything the child learns has a link to deeper truths in culture, philosophy, history, language and mythology.

“So, if made accessible through stories, games and characters, it’s much more valuable than a Disney or other cartoon universe because it remains relevant throughout a child’s entire life of learning.”

Yannis also points to the huge influence Greek thought had on the foundational thinkers of western culture through their classical education.

“The key figures that forged the modern western society, including the founding fathers of the USA, saw themselves as continuing a legacy that began in Greece. They knew the stories and felt the emotional bond. If we foster that sense of stewardship of ideas in our kids, then they will feel the same passion for ideas that inspired our forefathers, and they will be better citizens.”

The team has based the way the book works on the latest brain scanning technology, which is a more effective method to figure out what’s happening in children’s heads than asking a series of questions. 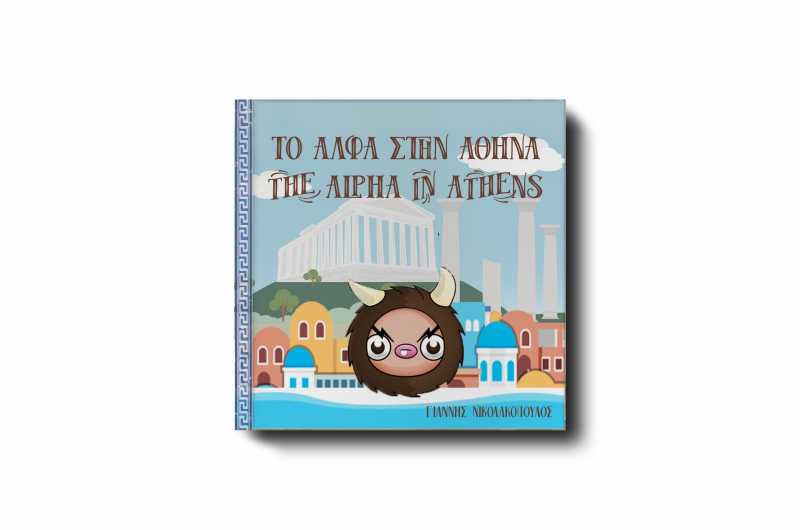 Yannis and Peter used the findings on how kids absorb information in the process of acquiring a second language.

“Researchers have found substantial evidence which confirms the benefits of kids learning a second language,” Yannis says. “Context is everything.
“I’ve been reading these surveys and I’ve been trying to implement these findings and merge them with my own creativity as a writer.”

He also thinks Greeklish is becoming a necessary bridge for ‘accustomisation’. The writer sees it as a helpful tool for engaging second and third generation Greek diasporans.

“It’s a moderated Greeklish, not the type people type on their computers out of laziness,” he clarifies. “It explains how to say the letters in context and help children get the accent right.
“Kids from all ethnic backgrounds learned Greek without even trying. That’s testament to how fun and easy it is, proving that context is more important.”

Meanwhile, education consultant Stephanie Kazacos tests the books in her child care centre and is impressed with the love the children have for the books and the stickers.

“There is a lot of new research that proves the cognitive benefits of bilingualism, so it’s an increasingly necessary part of our curriculum,” she says.

“And even though Greek doesn’t have a Latin alphabet, the emotional connection the kids have expressed around this book have led to the best bilingual learning outcomes I have observed. This book opens a lot of discussions and the kids genuinely connect to the characters, especially as stickers. The only problem is that the kids want to make the Greek salad every day and I am getting a bit tired of it.” 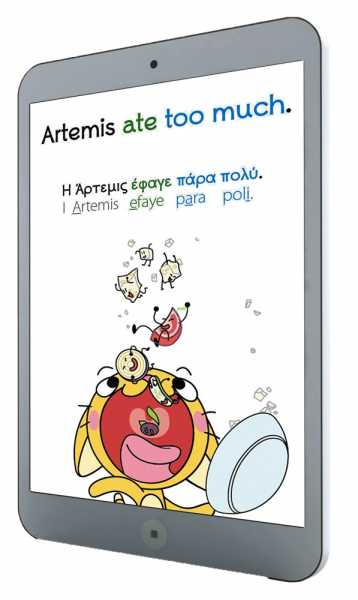 Peter Kazacos sees the first book as part of a broader strategy, while keeping the vision for the company simple.

“The first series focuses on Greek words, with follow-up series that will expand the universe of characters to include the Greek alphabet (the grammatakia), myth, philosophy, history and the beauty and mystery of the Greek land,” he says.

“We are not focused on the fallout of yesterday’s problems. We want to build cultural bridges to a Greece that is socially connected and economically thriving in the future.
“The company has a clear vision. To make one of the most fundamental languages in the world the easiest to learn, and to fascinate children with the depth and breadth of Greek culture.”

Yannis Nikolakopoulos’ first book in the series, titled Greek Around the House, is The Greek Salad. The ingredients are transformed into lovable characters, so that the simple act of making a Greek salad becomes an engaging adventure and an educational opportunity.

A little girl at a whitewashed stone window looks out to the dawn over the Aegean Sea. Today is her name day and she must prepare a Greek salad for her 24 cousins who are coming to celebrate with her. But when she tries to gather the ingredients, she finds they are all busy competing in the Olympic games. Does this sound a little Greek?

“I decided to turn all the ingredients of the Greek salad into little people,” the writer explains, insisting it is easier for children to absorb the names of the ingredients when they can relate them to a plot and think of them as individual characters.
“The love between the characters of the story and the plot is what helps children remember and learn Greek.” 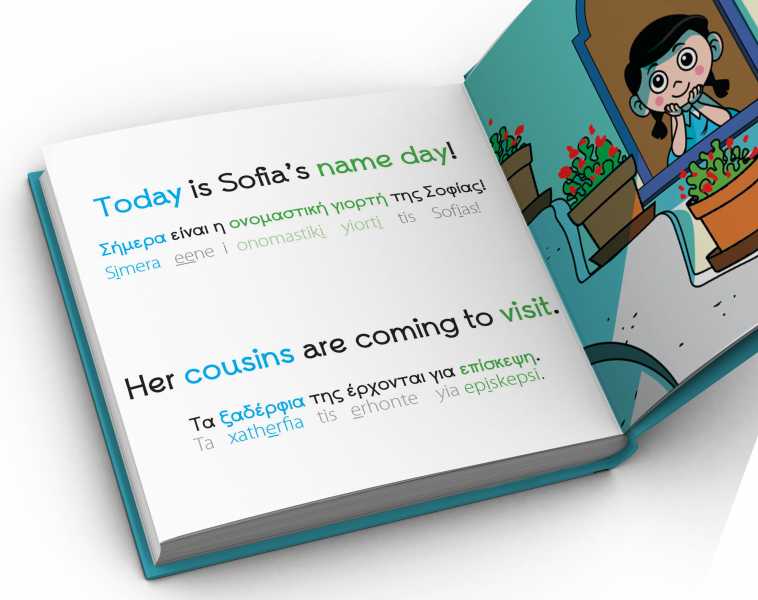 In the second series, which is for four to eight-year-old children, the writer has ‘invented’ The Grammatakia, about every letter in the alphabet. The first book is about A(lpha) in Athens.
“It’s basically a creature called Alpha who looks like the alpha case and visits all these locations in Athens,” Yannis says.

“The book acts like a tool-guide book and familiarises children with the important locations around Athens like the Αgora and the Αcropolis. Through Alpha’s adventures we also meet the rest of the story’s heroes, the other letters of the alphabet.”

Moving onto the next series, the writer acquaints us with Sophia’s family while focusing on cultural and historical aspects of Greek life. In the first book, titled Pappou’s pappou’s pappou, Sofia is living with her grandparents on a tiny, undiscovered Aegean island. One day she asks her pappou where he learned everything he knows.

“I actually worked with a historian to get around historical information accurately so that each pappou has a different job which reflects the situation Greece was in at the time,” he explains.

“There’s a priest, a farmer, a sponge-diver, a soldier pappou, who all together share stories featuring specific characters with which readers can engage.”

As a last addition, Yannis has put together another book that helps Sofia understand the woman’s role in Greek society. Her yiayia recalls all the great women of ancient Greece and modern times in order to inspire and help the young girl deal with her emotional ups and downs.

“Greek history has so many examples which a child can draw strength from, heroes to look up to and values to formulate a character in life,” Yannis points out.
“What we found helps children of all backgrounds absorb these books is that the historical information isn’t dispensed in a taxonomical way of factual resuscitation, but unlocked via simple, human interest stories without becoming boring or difficult to comprehend.”

For more information and to buy the book, go to grammatakia.com / You can watch the trailer here: www.vimeo.com/160914739