Crete commemorates the heroes of 1941

As Kazantzakis once said, “it is a great responsibility to be a Cretan” 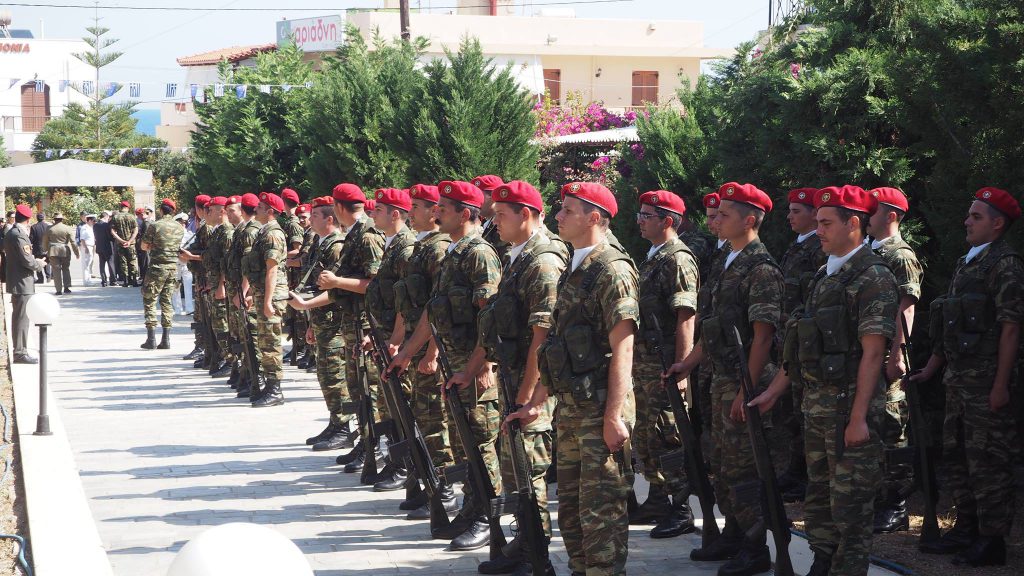 The big Island of Crete was bathed in warm sunlight when I arrived in mid-May. Blue skies and seas, the smell of eucalypts and the wide expanse of the White Mountains spread before me as I arrived in Chania.
It is hard to imagine what it must have been like to wake up in the towns and villages of Crete seventy-five years ago to the sound of Stuka dive-bombers sending their deadly cargo onto soldiers and civilians alike.

Yet the memory and effects of the war all those years ago is never far from view. They remain in the proud memorials that stand across the Island – and in the memories of many of the older inhabitants who are only too willing to re-count their story of when war came to Crete.

And the community as a whole pays homage to the bravery and suffering of the past in the commemorations held throughout the Island this year.

They range from the imposing military memorials that mark the locations where battles occurred or where soldiers, sailors and airmen fought and fell defending the Island. And they are reflected in the many village memorials to the thousands who were brutally murdered by the occupiers.

I began my pilgrimage by travelling south across the centre of Crete to the little south coast village of Sfakia. It was along this winding road and its surrounding mountain tracks, that thousands of Allied soldiers trudged, avoiding the ever-present air attacks, on their way to seek embarkation to Egypt.

Looking up at the bare, harsh and stony mountains, I wondered how they must have felt all those years ago. Thirsty and hot, weary from battle, it is no wonder that these Anzacs never forgot the help their recieved from locals.

At the commemorative service held here, before the Australian Ross Bastian’s impressive bronze relief, the local authorities honoured the service of the Allied soldiers and the sacrifice of the local population in supporting and helping the soldiers as they awaited embarkation. Two New Zealand veterans of the campaign had made the long journey south to be present, as well as members of the family of New Zealand General Kippenberg.

I looked out over the airport at Heraklion where paratroopers dropped on 20th May – as they did at Maleme and Rethymno to the west. They were met by the soldiers of the 2/4th Battalion – who had fought from Vevi in Macedonia across mainland Greece to Crete – and gunners of the Australian 7th Light Anti-Aircraft Artillery. Alongside the Aussies were the four British battalion’s including the Black Watch and Argyle and Sutherland Highlanders, and three Greek Battalions. Aided by the local population, the Allied forces were victorious. For eight days they successfully defended Heraklion.

With the decision to evacuate the Island, the Allied troops were evacuated from Heraklion. As I stood on the long mole that extends beyond the Venetian Castle at Heraklion harbour, I thought of Gunner Leonard Hodgson who walked this way seventy-five years ago. A young orchardist and driver from Templestowe, Leonard had fought off the German air attack on Heraklion for those eight desperate days. Yet his survival would be short-lived. The transports that left the port were subjected to terrific bombing – some 100 bombers attacking Leonard’s ship, HMS Hereward. The ship would be severely damaged and many killed including Leonard. I placed a poppy on the mole in remembrance of this young lad from Melbourne who rests in the waters off Heraklion. Moves are afoot at Manningham Council to have an olive tree planted in remembrance of Gunner Hodgson.

The other commemorations included the Australian War Memorials at Stavrominos and in Rethymno, commemorating the Greek and Australian defence of the long battlefield that surrounded the airport to the east of Rethymno. The Australian Hellenic Memorial that stands in Rethymno is particularly impressive and the service included the presence of two Cretans dressed in the manner of two local andartes.

The Commonwealth War Cemetery at Suda Bay was the site of the main Allied commemoration. As the sun shone across the wide blue expanse of the bay stretching in front of the hundreds of grave stones, the sound of bagpipes was followed by Maori laments as the various diplomatic, government, military and veteran’s representatives layed their wreaths at the large cross that stands in the middle of the cemetery. Over 500 are estimated to have attended the service – including a number of Greek, British and New Zealand veterans of the battles on the Island. One memorable moment in the service was the salute of the German delegation specifically to the veterans. However the most impressive commemorations were undoubtedly held at 42nd Street and at Galatas. Galatas stands above Maleme, in the foothills of the White Mountains. It was here that New Zealand troops led a counter-attack that routed the German capture of this strategically important village. Their bravery safeguarded the evacuation route south to Sfakia. The service was followed by much inter-action with the local villagers, attendees enjoying their hospitality – including the famed Cretan raki.

Yet as an Australian, the unveiling of the new 42nd Street memorial, south of Suda Bay, was particularly poignant. For it was here that New Zealand and Australian troops counter-attacked advancing German troops through the olive groves that still stand across this little road. One of those Australians was Reg Saunders, one of our proud indigenous servicemen. Their attack broke the German advance and left the Germans in retreat.

It was a great day for all who have supported the move to commemorate the battle fought here – especially Glenda Hume, the daughter of Reg, journalist Mike Sweet and historian Peter Ewer – who were all present. Glenda spoke of how her father was protected by local Cretans as he evaded capture after the Allied evacuation and how proud she was that his service and those who fought alongside him was now commemorated.

The hundreds who attended were honoured to experience the Maori Haka performed by members of the New Zealand military and descendants families, followed by traditional Cretan dancing – a fitting tribute to the lasting connection between Australians, New Zealanders and Cretans through the spirit of Anzac.

The Hon John Griffin, Australian Ambassador to Greece, spoke of this connection and its being symbolised in the service of another digger, Gunner James Zampelis. He was the only Anzac of Greek heritage to die during the Crete campaign. He was killed just a few kilometres west of 42nd Street at the village of Mournies.

As Kazantzakis once said, it is a great responsibility to be a Cretan.

I travelled across western Crete to pay homage to the bravery of the local villagers who paid such a terrible price for their desire for freedom. From Anogia, through Floria, to Kandanos and Kondomari – hundreds of villages contain memorials to the thousands of civilians murdered by the German occupiers in retribution for the Cretan resistance.

As one reads the names listed, you cannot but be struck by the women and elderly men included on the rolls of remembrance. At Alikianos, the Keriti memorial to the hundreds killed across the valley north of Platanias, contains an ossuary with the skulls and bones of the dead – many clearly showing the signs of bullet-holes.

As one German officer is reported to have later remarked, “Apart from the stones, all else rose against us in Crete.”
The Germans would continue to face fierce resistance on Crete across the long years of occupation and they would depart in defeat, leaving behind their own war graves.

One of the final commemorations was held at the German War Cemetery that overlooks Maleme airfield – the site of fierce fighting the outcome of which in many ways determined the battle of Crete in 1941. The cemetery contains 4,465 German dead, with a further 344 missing commemorated.

As one enters the cemetery, you are met by a bronze plaque erected in the name of the Allied veterans of the campaign – Greek, British, New Zealand and Australian – joined with those of Germany “in order to join hands across the graves as a sign of reconciliation and peace.”

The speech delivered by the German Ambassador was moving. After acknowledging the terrible destruction imposed across Europe by Nazi Germany, he affirms Germany’s continuing need to learn from this disaster and to dedicate itself to reconciliation and peace. And he pays tribute to the Allied veterans present at the commemoration.

This year’s commemorations were witness to a significant delegation from New Zealand. The representatives of the New Zealand armed forces and veteran’s families – particularly those connected to the 28th Maori Battalion were embraced by the local Cretan communities wherever they went. At many of the services the Maori songs of loss and bereavement were a moving reminder of the true cost of war.
Lest we forget.

Jim Claven is a historian and freelance writer who took part in the 75th anniversary commemorations on Crete as a member of the Battle of Crete and the Greek Campaign Commemorative Committee. He would like to acknowledge the hospitality of Nick Koukouvitakis during his recent stay on Crete.