How to lodge your tax returns in Greece 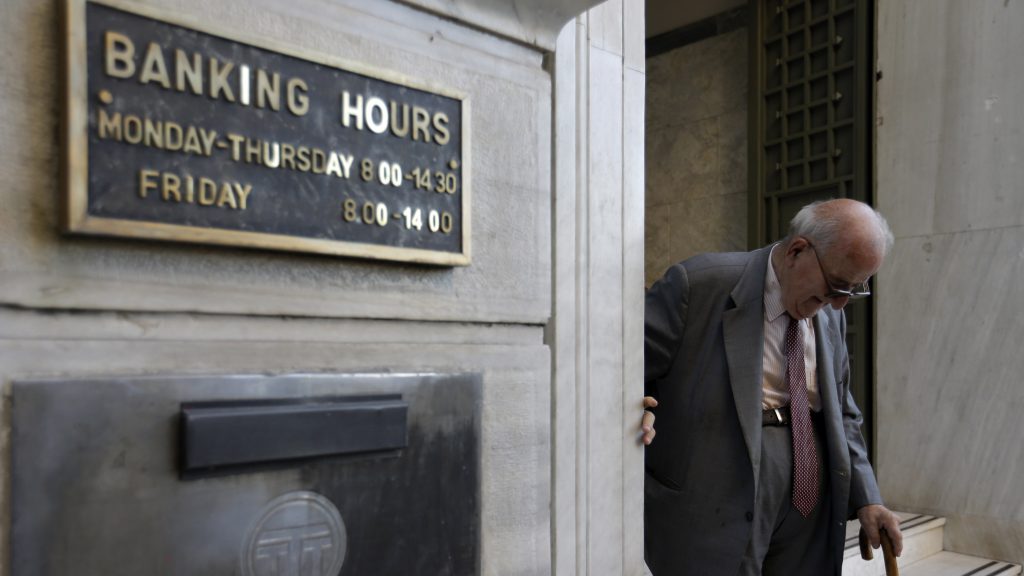 An elderly man leaves a branch of the National Bank of Greece in Athens. PHOTO: AAP via AP/THANASSIS STAVRAKIS

Foreign residents earning any type of income in Greece, (despite residing outside of Greece), must file their annual tax returns by end of June 2016. The usual income which non-Greek residents earn in Greece is rental proceeds from properties which they rent to tenants, as well as income from pensions. The rental proceeds and the pensions are income, which must be declared in their annual tax returns in the country. However, income in Greece could also be earned from participation to any type of company located and taxed in Greece.

Owners of bank accounts in Greece must also file annual tax returns. Even if they do not earn any type of income and they do not own immovable property in Greece, nor cars or boats or any other asset, the fact that they have earned even a few cents of interest on the balance of their Greek bank accounts within the year 2015 makes them have to file tax returns by end of June.

It is noteworthy that those who are considered for the Greek authority as foreign residents, do not have to declare in their Greek tax returns any income they obtain anywhere else in the world, save from Greece. However, if the foreign resident is declared in Greece as resident of Greece, he/she must declare their world income, meaning income from anywhere in the world. If they are being taxed in another country for the same income, they can produce written evidence about the tax they paid elsewhere in the world, so this tax is deducted from their Greek tax for the same source of income.

Those residing outside of Greece, owners of real estate (apartments, units, homes, plots, lands, undivided shares on the above etc.), and those who do not own immovable property but do own cars, boats or planes in Greece, must have already obtained their AFM (ΑΦΜ) Greek tax number at the time they obtained their asset, and must also have their own tax proxy in Greece, who handles, on their behalf, their tax returns and their dealings with the Greek tax office in general (including the E9 declaration of immovable properties, which must be updated on line 30 days maximum after you obtain or dispose of real estate property in Greece). If you simply own real estate (immovable property) in Greece, but you do not earn any type of income in the country, and if you do not have a bank account in Greece, you do not have to file annual tax returns in Greece, (provided you are officially considered a foreign resident).

If you reside outside of Greece but have property and/or other interests in Greece, you must clarify if your tax status with the Greek tax authority is really that of a foreign resident. Sometimes, people who reside outside of Greece have the status of Greek resident, which under some circumstances gives them some tax cuts. However, in that case, you are considered a resident of Greece and you may have to file yearly tax returns even if you do not officially earn income in Greece.

If the tax proxy of the foreign resident is an accountant or a lawyer, the proxy will know what to do by the end of the time limit. However, if the proxy is not a professional but just a friend or a relative in Greece, who simply helps you with your tax dealings, it might be wise to alert them that the tax filing must be done by end of June and also discuss if any changes in the E9 list of immovable assets must be filed via your on line Greek tax page. In any case, if you own property or earn income in Greece it is advisable to communicate with your tax proxy to make sure that you are on the same page on what needs to be filed and possibly to update your proxy on recent changes in your data, or give him/her vital information for the drafting of your yearly tax returns.

For instance, if during the year 2015 you sent to Greece any amount of money, you are advised to inform your tax proxy, because the amount of money you imported to Greece must be included in the tax returns and in most cases it will save you from present or future taxes or fines (when you will want to purchase property in Greece for example, in order to justify the source of the funds you used to buy the property). To this end, you must always keep all bank records and paperwork proving the wire transfer or any other type of sending of funds from a bank outside of Greece to your bank account in Greece. In order to benefit from the transfer of funds sent to Greece from other countries, the funds must have been sent from bank accounts outside of Greece which are in your name to bank accounts in Greece, also in your name (as single name or joint bank accounts).

Finally, the annual property tax in Greece called ENFIA is expected to be issued by the Greek tax office during the summer. The tax office does not mail written notices to property owners, nor do they even alert them with e-mails! You or your tax proxy must access your personal tax page on line to find out what is the amount of ENFIA you owe and what is the time limit to pay it.

Christos Iliopoulos is an attorney at the Supreme Court of Greece, LL.M. For more information head to www.greekadvocate.eu or e-mail ktimatologiolaw@yahoo.gr and bm-bioxoi@otenet.gr