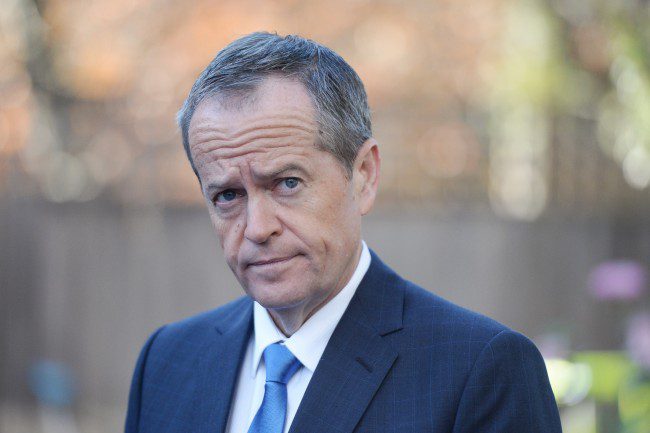 The Leader of the Opposition, Bill Shorten, is not a stranger to our community, having stated previously that Neos Kosmos has more readers than The Australian in his Maribyrnong electorate.

Adhering to his understanding of the voting power of the Greek Australian community, he touches on the same matters as the Prime Minister.

What the election ‘D-Day’ holds for Mr Shorten and his party is anyone’s guess, but here is how a Labor government under his leadership will address our issues of concern:

Does a future Labor government commit that its policies on the Cyprus and FYROM issues – issues of great concern to our community – will not change?
Labor recognises the community sensitivities regarding the use of the term ‘Macedonia’ and our policy is to use the terminology ‘Former Yugoslav Republic of Macedonia’, following UN practice, as a temporary measure pending a resolution on the name issue between the governments in Athens and Skopje.

A Labor Government I lead would look to any opportunity to contribute to, or facilitate, a United Nations-endorsed process to resolve the issues between the two parties.

On Cyprus, Labor will work to facilitate a just settlement of the Cyprus problem, based on UN resolutions respecting sovereignty, independence and the territorial integrity of Cyprus, and resulting in the demilitarisation and reunification of the island for the benefit of its entire people.

Are there any plans to change in any shape or form the current social services agreement between Australia and Greece?
No there are no plans to change the current agreement. In addition, we will scrap the Government’s changes to the period of time pensioners can spend overseas. Under the Liberals, pensioners who have lived in Australia for less than 35 years and who travel for more than six weeks will have their pension reduced. Under Labor, pensioners can stay overseas for 26 weeks without having their pension reduced.

Greek language programs are disappearing from the public education system despite Modern Greek being one of the 13 languages included in the National Curriculum. You personally, Mr Shorten, time and again, have spoken about the “special” relationship you have with the Greek community. Is a future Labor government going to take any measures to stop the trend of extinction of Greek language programs from the public school sector, so that the language programs available reflect the provisions of the National Curriculum?
Most of Australia’s second-language proficiency comes from immigration, not education. This balance could change for Australia’s social, cultural, and economic benefit. Labor values the contribution all multicultural communities make to Australia. My hometown of Melbourne is home to the largest Greek population outside of Greece. In recent days Labor has announced a $600,000 package of support for Melbourne’s vibrant Greek community. Our Future plan aims to make Australian schools among the very best in the world. Every student in every school will be supported to achieve their best through investment in more one-on-one support, better remedial literacy and numeracy programs – and more extension options for early intervention programs in every school.

Labor’s investment is targeted to improve the results of those students who need it most, including students with disability, Indigenous students, students in regional and rural areas, and students from low socioeconomic backgrounds. Labor’s policy is a $36 billion investment in our nation’s schools over the next decade.

Does a future Labor government commit that SBS will remain a sole broadcaster and that it will not merge with the ABC?
We believe that SBS has a very special mandate to tell the stories of multicultural Australia. SBS provides a unique national broadcasting service promoting multicultural Australia, and provides services to Australians from non-English speaking backgrounds which are not delivered by the ABC or the commercial broadcasting sector. That is why we believe that the ABC and SBS should remain separate entities and Labor will ensure SBS remains a properly publicly funded broadcaster.

In 2011 the then Australian government organised a Skills expo in Athens to inform people with certain skill sets about coming to work in Australia. This skills expo was a one off event; a lot of people showed interest and as a result, a number of skilled Greek nationals who were battling unemployment due to the economic crisis in Greece, managed to come and work in Australia, contributing with their skills to our economy. While these skills expos are still organised in other countries like Ireland where they occur almost on a yearly basis, since 2011 not even one has been organised in Greece. Will you be looking into organising a similar event in Greece?
The 2011 skills expo was a success for the Greek community, for Australia and for Greece. An elected Shorten Labor Government will look into organising another skills expo in Greece.

Will a future Labor government be willing to enshrine multiculturalism in the Constitution so as to include and reflect the real makeup of the peoples’ of Australia including our Indigenous and polyethnic character?
Australia is one of the most diverse societies across the globe. This was no accident and has been the result of hard work. We cannot stop now. Promoting social cohesion and economic inclusion will see the multicultural dividend grow into the future. In the coming financial year, Australia will see one of the largest humanitarian programs in our history, with over 20,000 new humanitarian migrants expected to arrive and settle in Australia. Many will be from Syria and Iraq, where people are fleeing persecution. Labor’s plan will ensure every new humanitarian migrant is given the best possible start to life in Australia.

A Shorten Labor Government will renew investment in Australian multiculturalism, with $28.3 million of new funding to support social cohesion and economic inclusion. Investing in new humanitarian migrants means promoting economic opportunity. We know the ability to speak English is the single most important factor in getting a job.

By funding migrant support properly in the short-term, Australia will be better off over the long-term. By ensuring our programs and policies continue to improve, more new migrants can fully participate.

We will invest $11.3 million to fund capital works for settlement and community sector organisations. For too long, support for new and established migrant communities has occurred without the necessary infrastructure.

We will also invest in the people who support new and established migrant communities. A funding stream of $7.5 million will help organisations build critical skills in their staff. From community leadership to volunteer management to bilingual engagement, these skills are vital to support new migrants settle into society and access the labour market.

Labor will create an Office of Multicultural Affairs to work with migrant communities and advise on multicultural policy.

These policies have been informed from the grassroots. After listening to settlement and multicultural organisations who live and breathe support for new migrants, Labor has the right plan to ensure future citizens are given the support they need.

One of the first decisions of the Abbott-Turnbull Government was to slash the Building Multicultural Communities program. Even after letters of successful grants had been received by many organisations, overdue projects were snatched away at the last minute.

Our investment represents a stark contrast to the Liberals. Instead of asking settlement and multicultural organisations to do more with less, as we saw in the Budget, a Labor Government will invest in organisations to help new humanitarian migrants succeed.