The Parthenon Sculptures go to Westminster 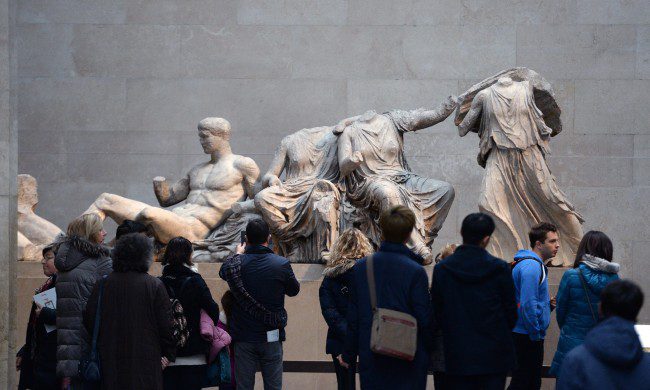 Visitors look at the Parthenon Marbles, also known as the ‘Elgin Marbles’, in the British Museum in London, Britain. Photo: AAP via EPA/Facundo Arrizabalaga

The British Museum for 200 years has held the so-called Elgin collection of Parthenon Sculptures, classical sculptures which adorned the Parthenon atop the Acropolis in Athens but which were removed under the instruction of Thomas Bruce, the Seventh Earl of Elgin in the early 1800s.

In 1816 Lord Elgin, by now in moral decline and on the verge of bankruptcy, was forced to sell them to the British government. By an Act of Parliament passed on 11 July 1816, the sculptures were vested in the British Museum, where they remain to this day.

On 11 July 2016, exactly 200 years later, a group of British and Scottish MPs, led by Mr Mark Williams and supported by Sir Roger Gale, Margaret Ferrier, Jeremy Lefroy, Mary Glindon, Hywel Williams and Liz Saville Roberts, have presented a bill to the UK Parliament seeking for the return of the sculptures to their place of origin.

The Private Members’ Bill, titled the ‘Parthenon Sculptures (Return to Greece) Bill’, makes provision for the transfer of ownership and return to Greece of the artefacts known as the Parthenon Sculptures, or Elgin Marbles, purchased by Parliament in 1816. It also proposes amendments to the British Museum Act to enable the disposal of objects in the museum’s collection which is otherwise prohibited by law.

Interestingly, the bill proposes that in making the determination that ownership of the Parthenon Sculptures is transferred to the government of a Hellenic Republic, the UK Secretary of State is required to consult with the trustees of the British Museum, representatives of the Greek government and any other relevant persons to ensure that satisfactory arrangements are made for the transportation of the collection, its future maintenance and display and future access to members of the public.

In presenting the bill, Mr Williams declared: “If there had been a justification for taking these sculptures into safe keeping in the UK in the early 1800s, that moment has now long passed. These magnificent artefacts were improperly dragged and sawn off the remains of the Parthenon. Indeed, they have hardly been in safe keeping. Nearly lost altogether on their journey back and damaged by inept management whilst in the British Museum.”

The Liberal Democrat MP went on to add: “This Bill proposes that the Parliament should annul what it did 200 years ago. In 1816 Parliament effectively state-sanctioned the improper acquisition of these impressive and important sculptures from Greece. It’s time we engaged in a gracious act. To put right a 200-year wrong.”

The issue of the Parthenon Marbles has been the subject of numerous Early Day Motions in the British Parliament and has been debated in both the House of Commons and House of Lords. It is fair to say that particularly on the Conservative side of politics, there is currently little enthusiasm for return. Private member bills presented in Parliament often do not progress from that point. However in this case, the proposed bill was presented and formally read the First time and is to be read a Second time on Friday 20 January 2017. What happens on that occasion remains to be seen.

Is Marblexit a possibility, especially since Britain has voted in the famous Brexit referendum to leave the European Union? In this writer’s view, that is unlikely. The so-called ‘Elgin Collection’ is literally the jewel in the crown of the British Museum’s collection and for many years the museum has propagated the myth that the sculptures in London tell a different narrative there and are no longer part of the Athenian story.

Earlier this month, the British Museum held what it described as a “special event” to mark the 200th anniversary of the “acquisition” of the Elgin collection of sculptures from the Parthenon. The promotion for the event claimed that “successive arrangements and reinterpretations of the sculptures have sought to display them as art, as architecture, and is part of a greater assemblage of world cultures”. But that is simply part of the museum’s descent into historical revisionism that has reduced the sculptures to mere objects of art without context or proper meaning.

The new director of the British Museum, Hartwig Fischer, has declared the British Museum can piece together remnants from the past and allows the visitor to engage with the objects. The museum is claimed to be a “place of shelter”, a repository of objects that have lost their world. What he ignores is the fact that the Parthenon Sculptures taken by Elgin were never lost and are still searching for their spiritual and physical home. And that place is not the dimly-lit, hollow Duveen gallery in the British Museum but the Acropolis Museum bathed in Attic light in Athens.

The campaign for return is set to intensify, with a major conference to be held in Athens in September 2016 under the auspices of the president of the Hellenic Republic. The issue of return will also be considered once again by UNESCO in Paris at the end of September, when its specialist Intergovernmental Committee meets. However, mediation has already been rejected by the British side and for the moment cultural diplomacy appears to have stalled.

According to The Times of London, the new British Museum director has been in the post for almost three months but had not received any contact from Greek authorities over Greece’s claim to ownership of the Parthenon Sculptures.

The Greek government has also previously received detailed legal advice about taking the British to court over the sculptures from an eminent team of lawyers led by the international jurist Geoffrey Robertson QC, and including Amal Clooney, urging the Greeks to seek international legal redress in the face of continued British stonewalling.

Maybe the time for a Marblexit has arrived. However, it requires a sustained and genuine effort from the Greek government to present a persuasive case for return.

The presentation of the Parthenon Sculptures (Return to Greece) Bill in the UK Parliament is a noble gesture and one hopes that it will help reignite the debate over the world’s most celebrated case of cultural property that needs to be reconnected with its place of origin.

* George Vardas is the vice-president of the Australians for the Return of the Parthenon Sculptures association.