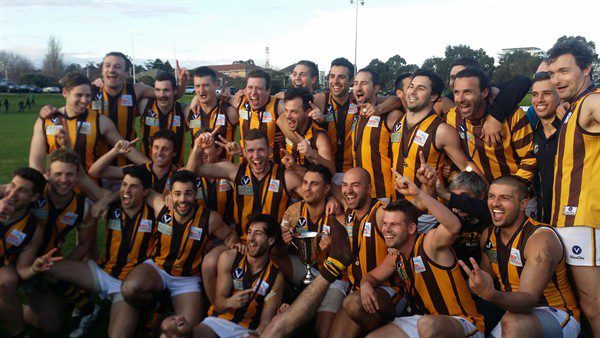 On Saturday the Spartans had a great win against second team on the ladder and arch rival Old Xaverians at their home ground by 55 points in tough wintery and windy conditions in another very even team performance.

The Spartans won every quarter, had 9 goal kickers, met all their KPI’s, had 32 scoring shots,again brilliant defensive work and a really exciting brand of football building momentum for the finals starting next Saturday.

Goal kickers were J. Farah 3, A.Mitropoulos 2, M.Dabab 2, T. Beech 2, D.Korlos 2, T. Barber 1, A.Lekkas 1, C.Pana 1 and A.Ziccone 1,
After 15 rounds the Spartans have only lost one game, have finished on top of the ladder and arch rivals Old Xaverians finished second.

This will be the Spartans 6th consecutive final series as they aim for back to back premierships.

As in previous years their will be a big crowd of Spartan supporters attending and cheering them on.

The canteen will be open.