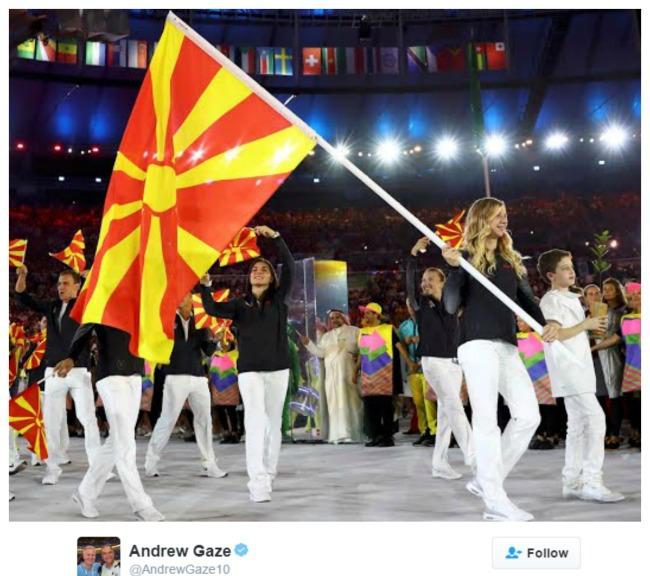 It’s been a week since Greek Australians were shocked to hear Andrew Gaze and Bruce McAvaney proclaim King Philip II of Macedonia, as “FYROM’s first Olympian”. The outrageous claim was part of their commentary during the Rio Olympics opening ceremony broadcast.

“There’s a bit of history for you,” McAvaney said, citing FYROM as the birthplace of Alexander the Great, while the country’s delegation of athletes paraded in front of the screen.

The incident sparked a furore as community leaders, along with the Greek Ambassador, issued statements and addressed letters to the network.

“At best it’s lazy journalism, at worst it’s deceitful; I don’t know where it sits in the spectrum, but it’s appalling,” says Bill Papastergiadis, president of the Greek Community of Melbourne.

“At an event which highlights the important contribution of Greece to global unity and sport, it was disturbing that the Australian presenters were ignorant of basic history and the contributions of Greece to the event which they were in fact broadcasting. It was incumbent upon us to immediately write to Channel 7, seeking a retraction and an apology,” he adds.

Addressed to the executive chairman of Seven Network Limited, Kerry Stokes, the letter deemed the announcers as “as uneducated and insensitive sports jocks whose throwaway line about Alexander the Great as the team from the Former Yugoslav Republic of Macedonia (FYROM) entered the stadium was simply wrong and politically inflammatory”.

In the letter, Bill Papastergiadis urges Mr Stokes to “educate your staff on nothing more than what is the internationally accepted name for the state known as FYROM and request that they do not rewrite history for cheap amusement or to fill in broadcast time. Finally, we request that an on-air retraction be made and that this be made in earnest”.

The same demand was made by the Pan-Macedonian Association of Melbourne and Victoria. In a letter addressed to all the network’s officials, Peter Jasonides wrote: “The continued ignorance in the Australian media is validating a ‘seamless fraud’. However, only two possible reasons could exist for Channel 7, Mr McAvaney and any other commentator making such claims. Firstly, an obvious notion of ‘payment’ may have occurred between the network and the FYROM community contributing towards their irredentist movement, or secondly, their complete ineptness of any historically accurate fact.”

A few days later, the two organisations return, along with the Australian Hellenic Council, issuing a joint statement to further express their ‘displeasure’ with Channel 7’s report.

“We are further appalled that the Messieurs McAvaney and Gaze, along with the channel 7 research staff, lack the fundamental knowledge of a subject they are reporting about. The Olympic Games in the old times were strictly a Greek affair; this is a fact not a mere opinion. Only Greek men were allowed to compete. History has recorded evidence that 17 ancient Macedonian Greeks had been victorious in ancient Olympiads. It is unknown to us how many others ancient Macedonian Greeks had competed, but did not win. The mere fact that Philip II of Macedon, father of Alexander the Great, had participated and won in the 106th, 107th, and 108th Olympiads recorded by Plutarch 3, 8; 4,9; Justin XII, 6.6, make the king of Macedon Greek,” reads the statement.

So far, the network has remained silent. The only response has come from Andrew Gaze himself. The veteran basketball athlete-turned sports commentator responded on Twitter, saying that “if it is incorrect or wasn’t communicated correctly, I sincerely apologise” and sharing a photo of the script he was provided, in which the inflammatory remark is written.

Instead of comfort, this further raised concern, given that the same remarks were made by Matt Lauer and Meredith Viera, who presented the ceremony for NBC in the United States, much to the outrage of Greek community leaders in the USA.

The Hellenic American Leadership Association has started an online petition to the NBC: “It may seem like a casual mistake, but words matter — especially those said on the international stage in front of millions. FYROM’s calculated campaign to lay claim to key cornerstones of Hellenic culture is well-known and condemned by scholars around the world. NBC shouldn’t aid them in their campaign of misinformation,” it states.
The coincidence didn’t go unnoticed in Australia.

“It is extraordinary that the exact wording was verbalised by USA presenters at the same time, which means they too followed a ‘script’,” wrote Peter Jasonides, asking “who wrote this ‘script’? Was the reading of it imposed on the presenters? Was it part of the successful winning of the television broadcasting rights?”.

It is not yet clear whether the two networks were alone in wording the inflammatory claims, as well as which was the source of this information. Both channels were granted access to the broadcasting rights by the Olympics Broadcasting Services (OBS), an agency of the International Olympic Committee, established in 2001 to be responsible for providing the images of the Olympic Games to the rights-holding broadcaster. Launched at the 2008 Olympic games in Beijing and based in Madrid, the OBS is led by Yiannis Exarchos, an experienced broadcast professional.

In a statement addressed to Neos Kosmos, OBS official Maria Naxaki asserts that the broadcaster “does not provide any supporting information for commentators for the Opening Ceremony. I can confirm that what is provided to them is a media guide that is written and produced by the Ceremony Creative Team, who is contracted by the Rio 2016 Organising Committee. Additionally, any information delivered via the Commentator Information System (CIS) at the venue is provided by the Rio 2016 Organising Committee. (…) It is our understanding that the commentator has issued an apology via Twitter, and explained that the comment came from a script written by Seven Network themselves”.

In the meantime, adding insult to injury, members of the FYROM community of Australia started a petition of their own, expressing their gratitude to Channel 7 “for the mention of Alexander the Great and his father Phillip of Macedon as being Macedonian. (…) Although they were under incorrect alphabetical order by being forced to go under the name of FYROM, the fact that Brazil, Canada and our Channel 7 commentators acknowledged Macedonia as a nationality is overwhelming and emotional for our community”, states the petition that must have led Channel 7 officials to further confusion.