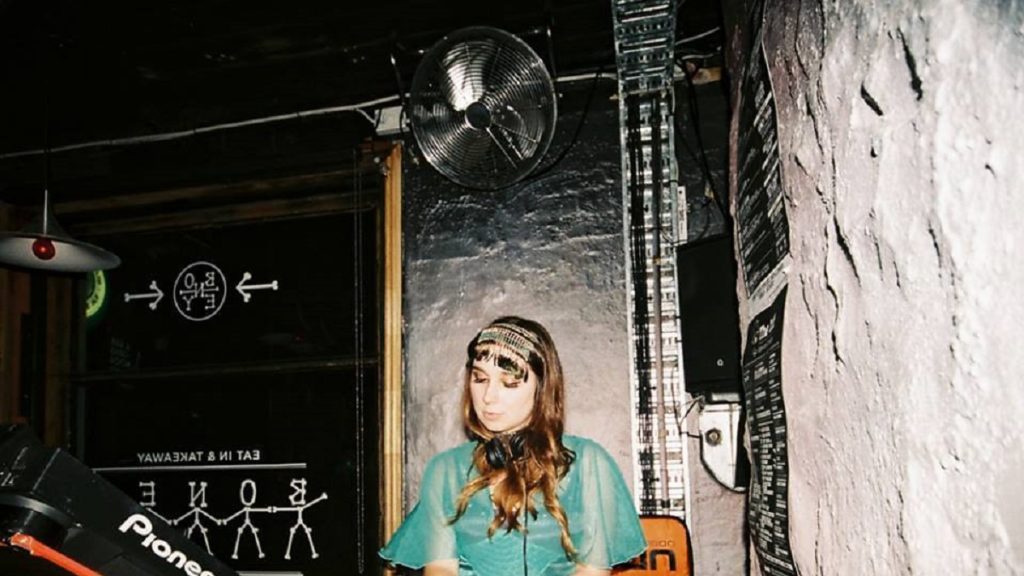 Adriana Lazaridis behind the decks.

If you haven’t listened to Adriana’s Opalakia show on PBS, then you should. Don’t be fooled by the name, it’s pretty hard-core, in a good way. It must have been three weeks ago when I first tuned in on a Monday afternoon, somewhere between one and two o’clock, and instantly got hooked. To be honest, I was so surprised PBS was playing eastern Mediterranean songs from past decades, seamlessly bonded together, that it took me a while to realise many of the songs were already known to me.

Her two-hour show presented old songs by musicians from all over Greece, Egypt, Morocco and Turkey, highlighting the amazing fusion of the local folk music with jazz, rock, funk and disco styles in the early ’70s.

Curious to find out more about the show, I contacted its Facebook page, only to find out all this knowledge had come from a 26-year-old Greek Australian.
Adriana Lazaridis always had a thing for music and a bit of the collector’s bug but it wasn’t until she discovered Twitter, and more such like-minded people on it back in 2011 that she thought of becoming a radio show host.

“I talked to a lot of people with the same interests on Twitter and we kept seeing each other at the same events. With some of them I have built strong friendships over the years,” she tells Neos Kosmos.

“There was this young woman who has her own show on PBS, CC: Disco, that made me consider giving radio a go. And here I am.” Adriana went in to the station, completed the training course and had been doing fill-ins for different producers who play wold music and focus on similar genres. Over the past year, she started getting more frequent broadcasts, which led to her own radio show, Opalakia, an excavation of rare ethnic music gems.

“I realised that this was missing from PBS. There are other shows with ethnic music like nu-disco, Italo-disco, Latin and African tunes, but there was nothing putting forward Greek, Turkish and Israeli disco. I grew up on these sounds and saw it as a chance to explore my heritage more, so I brought forward the idea,” says Adriana, whose parents come from a small town called Petres, near Aminteon in Florina.
“I would collect this music, I learned to love those sounds through my yiayia and pappou and their stories about how the Greek and Turkish sounds originating from Asia Minor and Istanbul were intertwined. I used to play all those ethnic tunes … Latin and Afro, thinking, ‘this is as far as I can go’. Then I watched one of the Fortuna Records guys’ Boiler Room sessions and I was like ‘hold on, people actually accept this music in Europe, Melbourne is a multicultural pot, why not offer the audience a new experience?’.”

It was the sound of one of Fortuna’s most popular releases that prompted Adriana to indulge more deeply into oriental music – the sole album by young female singer Grazia Peretz, a highly sought-after singer of only 16 years of age, who would perform at parties in the mid-to-late 1970s, singing in Turkish and Greek.

The album got lost amid the American and Italo-disco, but over the years it became one of the most valuable albums for collectors. Its renewed release by Fortuna helped put the record label more out there. After the exposure, Fortuna DJs were receiving many invitations to play in Greece. They released another single disc − ‘A propos Greece’ became one of the most played pieces in Israel over the last 50 years, thanks to a hit from a Greek singer, Aris San.

This new wave which sprung out in eastern Mediterranean countries, with the younger generations revisiting their past and exonerating their identity, took Europe by surprise, leading events hosting oriental disco and psychedelic ethnic sound into becoming a hit.

It was around that time that Adriana started having regular gigs at venues around Melbourne as a DJ, and through her interaction with punters she discovered that it is exactly this kind of music she loves playing and dancing to, which later became her signature style. In the beginning, she thought no one would understand her selections, but she took the risk, as she believes that a DJ is someone who should break new music and introduce different styles, rather than just play the classic or current hits.

“A good DJ takes chances. I haven’t been doing it for long, but you have to take risks and find the right combination of sounds to ‘please’ your audience,” she says.

“There is so much wealth in music, cultural wealth. You can hear a lot of interesting music while in Europe; it’s mind-blowing how open everyone is to new and older sounds. I started playing some tracks in venues and believe it or not it was those songs people would always ask me about.”

One of the things that would frustrate her occasionally was that DJs sometimes tend to get locked in to a similar program of music. It doesn’t necessarily mean that the venue demands a certain style of music, but a lot of emerging DJs tend to follow the trend, leaving out some of the not-so-popular options.
“My model as a DJ is playing the music and trying to incorporate everything from brand new, underground, nu-disco, to the oldest rebetika, dimotika, oriental and tsifteleli with some kind of rock break from the ’70s. There can be so much freedom as long as you’re willing to touch on new, emerging things, which in my case come straight from the past.

“Don’t get me wrong, but the Greek music − even the tsifteteli style songs I choose to play are not the modern ones, but originate from tradition and pure, local oriental sounds − are part of the area’s cultural history.”

What Adriana has observed, however, is a certain difficulty in trying to retrieve and access Greek songs from that wave, in comparison to the availability of Turkish, Egyptian and Israeli works.

“People like the Fortuna Records team make this music even more accessible and popular, but I’m committed to delving deeper into this,” she says.

“I’m very excited with the way my show and my sets are being received, not only by the Greek community, but from other audiences as well who are getting to know the Mediterranean culture.”

* To listen to Adriana tune in to PBS every Monday from 1.00-3.00pm. Her next gig is on Saturday 3 September at Belleville in Melbourne as part of the world music night Kkwame Apeilon.