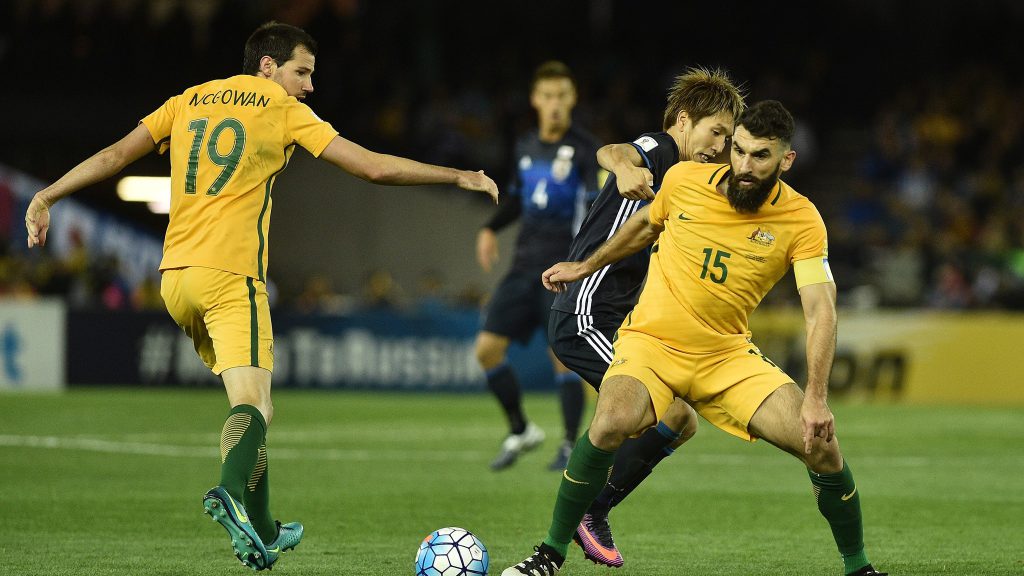 Despite keeping its undefeated record intact, the Socceroos have missed out on the chance to stay top of its World Cup Qualifying group following a 1-1 home draw against Japan last Tuesday evening. Saudi Arabia 3-0 home win over UAE in Jeddah on the same night, means that the Socceroos drop to second behind the Saudis on the World Cup Qualification Group table.

For those anticipating an even tussle between two of the strongest footballing teams in the Asian Football Confederation at Docklands stadium last Tuesday, the performance was quite a surprise even if the end results was more in keeping with the history of close matches between these two rivals.
There has probably never been a Socceroo-Japan matches in which the Australians have so dominated possession against one of the strongest sides in Asian football. The stats show the Socceroos had more than twice the amount of possession and played twice the number of passes than Japan. Likewise it’s difficult to recall a Japanese team that has been so defensive minded. Coach Vahid Halilhodzic set his team out in a 4-5-1 formation with AC Milan’s Keisuke Honda leading the line, indicative perhaps of the respect Hililhodzic had for the Socceroos and a clear admission that both he and the team could ill afford a second loss in the first four games of the qualifying campaign.

Socceroos boss Postecoglou, still looking for his first win against the Japanese, sprung a selection surprise beginning the match with a 4-4-2 formation, which whilst conceding some speed and width in attack, enabled him to introduce Massimo Luongo into a four man midfield. Up front partnering the in-form Tomi Juric, was striker Apostolos Giannou who was a late inclusion in this squad due to an injury to Dejenak. Postecoglou also started right back Ryan Mcgowan in place of Mark Milligan.

Australia suffered an early set back in the fifth minute when an early turnover of possession in a dangerous area allowed Honda to feed the ball to left sided midfielder Genki Haraguchi who calmly slotted a left foot shot past Matt Ryan. As in the last match against Saudi Arabia, the Socceroos had to find a way back into the match after conceding early.

From Australia’s point of view, despite its large share of possession, the first half was frustrating. Midfielders Rogic, Luongo and Mooys were closed down quickly, rarely linking with the forwards. The Socceroos rarely penetrated the Japanese back four and the team failed to play forward quickly enough, creating no clear cut chances.

Within seven minutes of the restart however, Australia was back on level terms, when marauding left back Brad Smith’s incisive cross found Juric who went down in the box under a Haraguchi challenge. Skipper Mile Jedinak calmly fired home the resultant penalty to lift the home team. Postecoglou sensed a pivotal point in the match and introduced Robbie Kruse for Giannou, changing to a 4-3-3 formation hoping to exploit a tiring Japan with more width and movement up front. Despite continuing to dominate possession and the midfielders Rogic, luongo and Mooys finding more space, clear cut openings continued to elude the Socceroos. In fact it was the counter-attacking Japanese through a goal-bound Yu Kobayashi header, who came closest to scoring, foiled only by a terrific Matt Ryan diving save.

Tim Cahill and Matthew Leckie joined the fray off the subs bench as the Socceroos pressed hard for an precious winner, but it was defender Matthew Spiranovic who came closest to scoring when he headed narrowly over the bar from a set piece with just minutes remaining. In the end the Socceroos had to settle for a point frustrated by its lack of clear cut chances despite bossing possession.

After the match, Socceroos coach Ange Postecoglou blamed the early conceded goal and the static display rather than the team formation for what he described as a wasted first half.

“It was not the formation that let the team down,” he said. “It was because the team was very static and we were looking for solutions in the wrong way.
“I’m not leaning one way or another ( formation wise). I guess what we’re trying to do is create a scenario where we have multiple ways of breaking down the opposition. You’ve seen in these last four games both at home and away the opposition sitting off us. I don’t want us to be predictable.”

“We were poor in the first half, got off to a poor start, conceded a soft goal. They sat off, closed down the spaces, we just weren’t mobile enough. We wasted 45 minutes…We were rally static, there wasn’t a lot of movement, we were looking for things precisely instead of pressing the issues. We had half an eye on the scoreboard and you just can’t do that. The scoreboard will take care of itself. Instead of being a little too precise and too cute, we should have taken the game to them a bit more.”

“He (Juric) was okay tonight. He and (forward Apostolos) Giannou were a little bit too stagnant for us in the first half.(But) with Tommy he’s had an effect on the game.It’s good to see he’s certainly maturing and progressing well.”

“I knew many of my players were fatigued. Our tactics were based on the physical condition of our players and they did a good job, especially defensively.
“We let the opponent have the ball because we knew we would have chances to score.

“I knew everything about Australia and they are the Asian champions, sometimes you can’t take too many risks. I won’t comment on their goal, but we could’ve scored more, their keeper (Mat Ryan) made two great saves.

“We were not in danger, they didn’t create chances, we were well organised. When we got the ball we hesitated. We have to be more secure in our passing.

“I congratulated the players and asked them to win a starting place at their clubs and if they don’t play, to do extra training to be fit for the next camp.”

Australia’s next group qualifying match is on November 15th away to Thailand.