‘Thank you for making our dream a reality’

After two liver transplants and ten years of failed IVF treatments in Australia, Joeanne Friggieri was finally granted the gift of bringing a life into the world thanks to the persistence of her Greek doctors 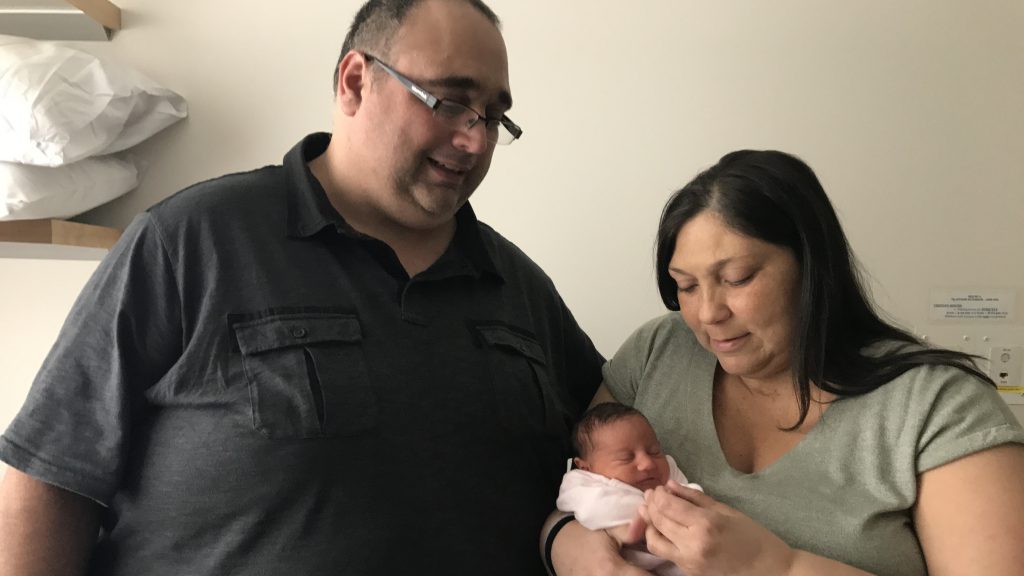 Brandon and Joanne Friggieri, with their newborn daughter, Charlie.

The risks associated with in vitro fertilisation treatments (IVF) and the potential side-effects can be persistent and even dangerous for women that are otherwise perfectly healthy, let alone for someone like Joeanne Friggieri.

For the 41-year-old Australian woman, however, there was no other option; no other path.

It was ten years ago when Joeanne and her husband of Maltese heritage Brandon, 43, embarked on a long and painful journey of both psychological and financial struggle, in order to make their dream of bringing a baby into this world a reality.

“I’ve always been told I’d need IVF with all my health issues,” she tells Neos Kosmos.

“I started trying exactly ten years ago. At the same time I was struggling for my life.”

Joeanne , who has type A diabetes alongside several other auto-immune conditions, has undergone two liver transplants. After her second liver transplant her system shut down as she acquired a viral infection.

“She got really sick and slipped into a coma,” her husband explains. “We were told by the doctors that we’d be lucky if she made it though the night.”

“She was in intensive care for a very long time, she had liver failure and as a result of the use of heavy medication she developed bilateral myopathy in her arms, medicine caused fractures; the bones in her feet are starting to die off. She even had to learn how to walk all over again five years ago.”

While fighting to stay alive, Joeanne was having IVF treatments. She and her husband would go through several cycles in Australia and not once did they manage to fall pregnant.

“Health conditions aside, many people look at me and assume my body weight was an issue, but I was a size 10 before getting pregnant. The weight I’ve put on is a result of the steroids in order to carry out the pregnancy,” she explains.

“We would go through a treatment here, not once successful and take a break as quietly. We did not have much support from the doctors in Australia. We had to push to get in touch.”

According to Brandon, wanting to go to a private rehab hospital, they were put in the “hard basket” as Joeanne’s predicament was “making things difficult”. They both felt “too much of a complication, a nuisance even”. Prior to meeting Dr Nick Lolatgis, the couple felt that they were being sucked into a spiral of numbers, trapped into a money crunching saga.

“When we were referred to Mr Lolatgis, we realised we weren’t just numbers, possibilities and bank account figures, we were human beings and finally we were getting the support we wanted,” Brandon stresses.

“He picked up where others left off and went back and did the whole health check, all over again. He wasn’t deterred by the history. Did not turn us away. He didn’t fill us with false hope either. He empathised. He left no stone unturned.”

In the process of his investigation Dr Lolatgis discovered that Joeanne and her husband shared the DQ Alpha (DQa) gene. Having a genetic match for DQa impacts the connection between the paternal DNA contribution (sperm) and the maternal body (uterus). Once recognised by the uterus, the paternal DNA in the semen instead of being allowed to implant sends a thwarted genetic message to the mother’s body causing the immune system cells to eliminate the embryo which is interpreted as an “anomaly”.

“Lolatgis, as part of a Lymphocyte Immunisation Therapy (LIT) drew white blood cells from me and injected them into Joeanne’s skin to prepare the maternal immune system for pregnancy. We did this procedure twice to ensure her body would accept the embryo,” Brandon explains.

Once that stage was complete and Joeanne’s health issues had been stabilised, it would be through dr Lolatgis’ recommendation of Dr Con Pantos that the Friggieri could take it to the next level: Greece.
Travelling to Greece, however, to undergo yet more cycles of IVF at Genesis fertility clinic came at a cost, but there are absolutely no regrets for the happy couple. Brandon had to sell his business and rely on family support for a year.

“It was our dream to have a baby and we were always willing to sacrifice things in order to get there,” he says. “We were prepared to sell our home; I’ve sold the café I owned in Melbourne to be able to go to Greece. Note this though, if we had found Dr Lolatgis sooner we would have perhaps saved ourselves from a lot of trouble.”

Did they ever think of quitting? Many a time. But Joeanne’s faith in her new doctor kept her going. Having already spend a fortune and experienced so much pain “for nothing”, made them risk it and persevere.

“Soon after I went to Greece I got pregnant for the very first time. That was last October,” Joeanne sobs. “I had never gotten pregnant before, no matter what we tried, for those ten years.”

“I fell pregnant straight away. I had a miscarriage when we returned to Australia, it was a great blow, but the hope I was given by that pregnancy made me try again two months later. There were days I couldn’t move because my sugar levels were too high, but I kept pushing through. I still wonder if it’s true sometimes but when I look at my little baby’s face I know that I would never give up. It’s the most real thing I’ve ever felt.”

For the second pregnancy, the Friggieri extended their stay in Greece to ensure the embryo had implanted and was growing normally, before returning Down Under. As much as they would have liked to stay in Greece for the duration of the pregnancy, as they admitted, Joeanne was in need of ongoing medical check-ups and treatment for her other conditions.

“I can’t even begin to describe the amount of happiness and euphoria the baby has given us and all our efforts and struggles make perfect sense,” says Brandon.

“I need to say this and I don’t care,” he insists. “Both Dr Lolatgis and Dr Pantos are cutting edge. Not just in terms of technology but they feel your pain and are prepared to do anything to alleviate that, to help you get what is medically possible to achieve without putting your health at risk. Moreover, the quality of service we got in Greece, the level of the medical staff’s knowledge… it does not compare.”

“We don’t feel it’s an exaggeration to recommend going straight to Greece to anyone who’s experiencing this kind of issues in Australia, or anywhere in the world for that matter.”

That’s when little Charli is brought up to room 5A in Mercy Hospital’s Maternity clinic, wrapped in a pink blanket and wearing a matching onesie. Less than a week from her arrival and she’s ready to go home for the first time. Meanwhile, Dr Con Pantos is waiting at the other end of the line looking forward to receiving photos of little Charli before the family are released.

“I share the parents’ joy and I feel proud I was part of Charli’s journey,” he tells us over the phone. “This couple’s adventure is more than moving. We are talking about a woman who was fighting to stay alive as hard as she was fighting to become a mother. She is probably the first woman – regardless of the rest of her serious health issues- that achieved motherhood after two liver transplants. An undeniable milestone, a victory that can boost Greek doctors’ efforts and ongoing research in the field.”

The president of the Athens Medical Association, George Patoulis, also congratulated the happy couple. “As a doctor, I understand the battle you went through to save your life and at the same time appreciate your ordeal to finally achieve pregnancy and have a child, which you so much deserve,” he told the Friggieri.

“I sincerely wish you both every happiness and may you see your child grow up to your expectations. As president of the Athens Medical Association I would like to congratulate you on all your efforts and want to declare how proud we are, as a country, to have stood by you and to have successfully contributed to the final achievement of your dream come true.”

“We just want to say a big ‘efxaristo’ to the doctors,” Joeanne says bursting into tears. “Thank you from the depths of my heart.”

“To the people who choose the IVF path and experience difficulties in getting pregnant all I want to say is don’t give up! If they could help me get pregnant with all those health conditions, there is hope for you, too. Don’t give up on your dream. I look at this gift I’ve been offered and I can’t believe it. I’m so grateful for everything I’ve got and I feel more motivated to start over than ever.”

Some think it will be hard to start over now with a baby in their lives but for the happy couple, Charli’s arrival is their main incentive to take life head on and tackle their health issues.

“I’ll start over. We can start from scratch again,” Brandon says hugging his wife and daughter.

“It was costly, yes, but we can’t put a price to the life we hold in our hands. Words cannot describe how we feel and how indebted we are but at the same time motivated and determined to make it; we have now the strongest incentive.”

For Brandon, who has a thing for Greek mythology, if there is a god for fertility, it’s Dr Pantos. Relying on the support of his family for a little while longer, he hopes to be able to stand on his own two feet soon and dreams of returning to Greece, this time, as a family of three. His wish is to thank everyone involved personally.

Joeanne concurs with a node while feeding Charli.

“I want to take her to Greece when she’s old enough to understand. I want Charli to know how she was born into this world, what we went through, and the people thanks to whom she’s with us.”

“She’s got a little bit of Greece in her, too, anyway. Doesn’t she?”