It was a great honour to be invited by the Consul-General of Greece, Her Excellency Christina Simantiraki, to a special awards ceremony held in Melbourne last Sunday 6 November.
The event hosted by South Melbourne’s Hellenic RSL Sub Branch was held to honour the war service of 26 Anzac veterans who served in Greece. The event was the occasion of the awarding by the Consul-General of the Greek Medal of Honour 1940-41 and associated scroll to the families of veterans of the Greek campaign.

Over one hundred people attended, including the descendants of these veterans were in attendance representing their loved ones.

Stephen Dimopoulos, MP for Oakleigh attended, representing the Victoria Minister for Veterans, the Hon John Eren MP, as well Victorian Minister, the Hon Jenny Mikakos MP. The Hon Bruce Atkinson, MP for eastern Region and President of the Victorian Legislative Council was also in attendance, as was former MP and Minister, the Hon John Pandazopoulos. Nikolaos Kydas from our Committe as well as Lambis Englezos, our patron, were also present.

The names of the 26 diggers honoured are listed here –

The master of ceremonies was Mr Terry Kanelos, Secretary of the Hellenic RSL Sub Branch and also a member of our Lemnos Gallipoli Commemorative Committee.

It was a special pleasure to hear the Consul-General mention the erection of our Lemnos Gallipoli memorial at nearby Albert Park as one of the most markers commemorating the Hellenic connection to Australia’s Anzac story. She also mentioned the recent erection of the new 42nd Street Memorial near Suda Bay on Crete, supported by Australia’s Cretan community, as well as the erection only last month of a memorial plaque at Greece’s Brallos Pass in commemoration of the service of the Australian 2/2 Field regiment in the important battle fought there April 1941. The latter was erected by the 2/2 Field Regiment Association and unveiled by the Australian Ambassador to Greece, His Excellency John Griffin.

It was particularly good to meet the families of some of these honoured veterans. 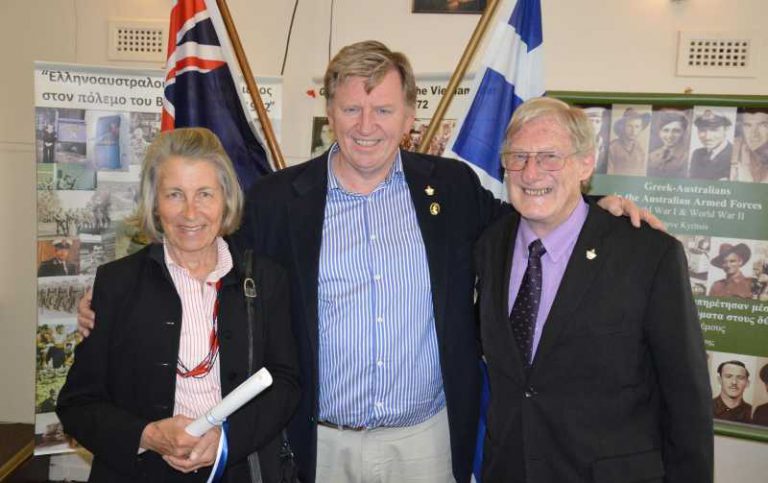 Corporal Herbert ‘Slim’ Wrigley
One of those present was Ms Xanthoula Wrigley, the wife of Corporal Herbert “Slim” Wrigley. Corporal Wrigley served in the Greek campaign, was captured and escaped to fight with the Greek resistance against the German occupation of Greece. During his escape and resistance work Herbert was supported by the family of Xanthoula Papadopoulos , whose father Ioannis was in the resistance.
After the war, Herbert and Xanthoula began a correspondence that would lead Xanthoula to Australia and marriage with Herbert.

Major Hedley Stephens
Another couple present were Susan Kimpton and Bernie O’Connor, relatives of Major Hedley Stephens. Hedley enlisted early in the war – his enlistment number VX99 – betraying his enthusiasm to serve his country. Born in Tasmania in 1906, Hedley was living in Hawthorn and had served in the milita when he enlisted at South Melbourne on 1 November 1939. Serving with the 2/2 Field Regiment, he served under Brigadier Ned Herring, a veteran of the Salonika campaign in WW1. During the Greek campaign Hedley was attached to the 6th Division Headquarters. During the withdrawal from Greece, Hedley made his way across the Corinth Canal, through Argos to Nafplio, where he awaited evacuation. unfortunately Hedley was not evacuated. Captured by the Germans, Hedley served out the war as a POW in German prisoner of war camps. He returned to Australia after the war and was discharged on 2 August 1945.

If you are the family of a veteran who served in Greece during WW2, have not received this award and believe that you maybe eligible, please contact the Consulate of the Hellenic Republic in Melbourne – email: grgencon.mel@mfa.gr; phone: +613 98664524
On behalf of our Committee, congratulations to all the families who received their medals and scrolls on behalf of their loved ones. And a big thank you to the Consul-General for making these awards and to the Hellenic RSL Sub Branch for hosting them.

A personal thank you to Manny Karvelas and Paul Soug for sharing their photographs – yet again.